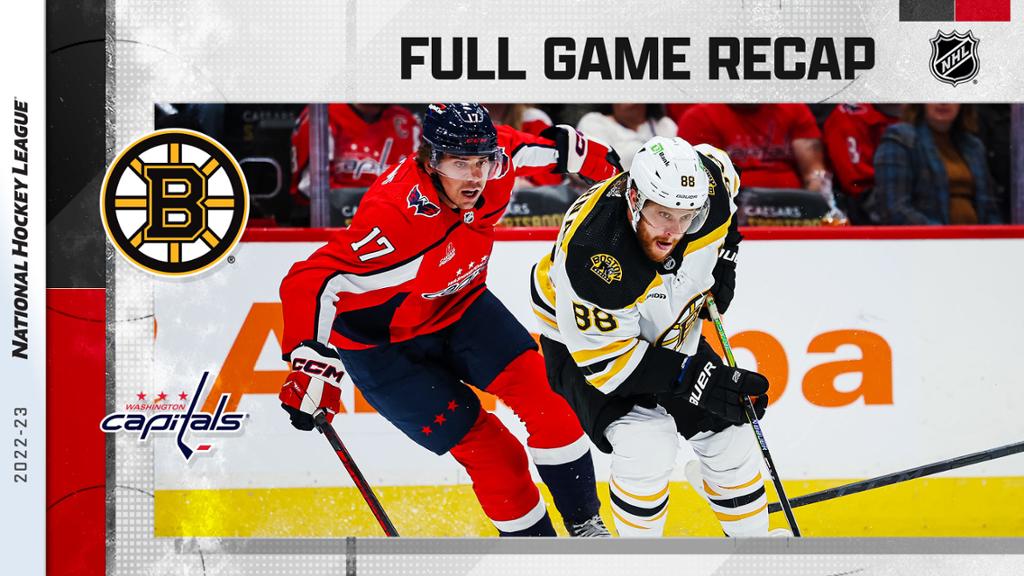 WASHINGTON — David Pastrnak had a goal and three assists to pace the Boston Bruins to a 5-2 win against the Washington Capitals in the season opener for each team at Capital One Arena on Wednesday.

David Krejci had a goal and two assists in his first game back with the Bruins after playing last season in the Czech Republic. Patrice Bergeron, Taylor Hall and Hampus Lindholm scored, and Linus Ullmark made 33 saves to help Jim Montgomery win his Boston coaching debut.

“Beginning of the year, nothing’s pretty, but what I really liked is how we stuck together. Guys sacrificing their bodies. There were blocked shots,” said Montgomery, who received a game puck after his first game as an NHL coach since Dec. 7, 2019.

Anthony Mantha and Conor Sheary scored, and Darcy Kuemper, who signed a five-year contract July 13, made 25 saves in his Capitals debut.

“We were just outdone a little bit in the first period, the first half of the game,” Capitals coach Peter Laviolette said. “I thought we came out in the second period and even continued to push in the third, but when you fall behind 3-0, you’re going to have a difficult time on a nightly basis winning hockey games.”

“It was great, just being around the guys, playing on an NHL rink against the best players in the world,” Krejci said. “I was excited and a little nervous at the same time, but I’m glad we got it done.”

Bergeron gave the Bruins a 1-0 lead on a power-play goal at 7:58 of the first period. Kuemper made the initial save on Pastrnak’s shot, but Bergeron knocked in the rebound.

Pastrnak made it 2-0 at 15:03 when he skated through the right circle, spun and beat Kuemper through the five-hole from the slot.

“He’s growing each year,” Krejci said of Pastrnak. “He’s just a world-class player. It’s crazy. That guy has no ceiling. He just keeps getting better.”

Hall increased the lead to 3-0 when he converted a pass from Pastrnak on the rush at 6:14 of the second period.

Dylan Strome entered the zone 2-on-1 and fed Mantha, who scored from the far post at 7:34 to pull the Capitals within 3-1.

“We didn’t get off to the start we wanted. We didn’t just simplify, get pucks in,” Washington defenseman Trevor van Riemsdyk said.

“I thought we did a good job kind of taking over the game there in that second half,” Kuemper said. “We really dug in, which is a good sign after that early hole.”

Bruins forward Jake DeBrusk left the game with an upper-body injury after a hit from Alex Ovechkin with 40 seconds remaining in the second period. Montgomery did not have an update after the game.

NOTES: Montgomery was 60-43-10 in 113 games (2018-20) with the Dallas Stars. … Pastrnak is the first player in Bruins history to have at least four points in two season openers (2-2-4 on Oct. 13, 2016). Boston’s record for points in an opener is five (Phil Esposito, 3-2-5, Oct. 10, 1973; Brad Marchand, 2-3-5, Oct. 13, 2016). … Krejci has 517 assists to move past Wayne Cashman for sixth in Bruins history. … Bergeron’s 401st goal is one behind Rick Middleton for third in Bruins history behind John Bucyk (545) and Esposito (459). … The Bruins are 9-2-0 in their past 11 season openers. … Defenseman Anton Stralman, who signed a one-year, $1 million contract with Boston on Wednesday, was with the team but did not play due to Visa issues. … Bruins forward Jakub Lauko played 11:36 and drew two penalties in his NHL debut. … Forward Pavel Zacha had an assist in his Boston debut. … Capitals forward Evgeny Kuznetsov played his 600th NHL game. … Kuemper played his 300th game. … Washington had won five straight season openers and earned points in eight in a row (6-0-2). … Strome played 19:54 and had an assist in his Capitals debut. … Defenseman Erik Gustafsson had an assist and played 14:50 in his Washington debut. … Forward Connor Brown played 19:28 and had two shots on goal in his Capitals debut. … Capitals defenseman Martin Fehervary had a game-high 10 hits and Ovechkin had nine. Washington outhit Boston 48-32. … Washington plays at the Toronto Maple Leafs on Thursday.