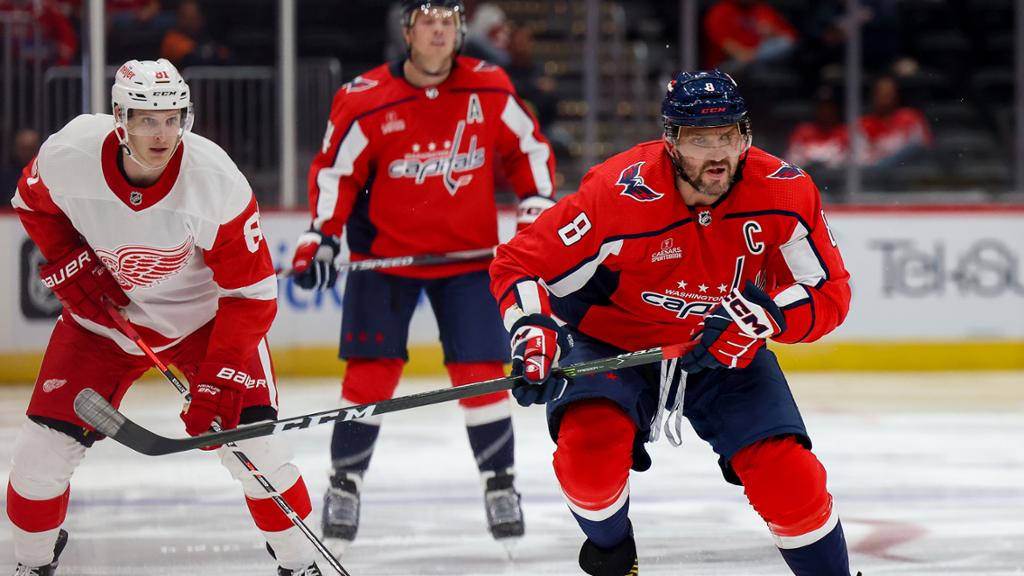 Alex Ovechkin hasn’t scored in the past two games. That, I say, is good because he now has a chance to either catch or pass Gordie Howe for second all-time in NHL goals scored against Mr. Hockey’s old team when the Washington Capitals host the Detroit Red Wings at Capital One Arena (7 p.m. ET; NBCSWA, BSDET, ESPN+, SN NOW). Had Ovechkin scored against the Dallas Stars on Thursday or the Toronto Maple Leafs on Saturday, his 801st career goal would have been celebrated Monday, and rightly so. The goal would have equaled Howe, second behind Wayne Gretzky who holds the NHL record of 894. But there’s something fitting about Ovechkin having the opportunity to match Howe against Detroit, the team Howe scored 786 goals with. Ovechkin, who has scored all of his 800 NHL goals with the Capitals, scored No. 800 on Tuesday to complete a hat trick in a 7-3 win against the Chicago Blackhawks. If you’re not watching this one then there’s a good chance you’ll miss history, because Ovechkin, who has 20 goals in 33 games this season, has not scored a goal in at least three straight games only three times this season. Odds are he’s got a goal in his stick Monday. — Dan Rosen, senior writer

Panthers face Bruins in Boston among many challenges

A high degree of difficulty that’s challenged the Florida Panthers this season may reach its peak when they play the Boston Bruins at TD Garden (7 p.m. ET; TVAS, NESN, BSFLX, ESPN+, SN NOW). The Panthers are awaiting word about their captain, Aleksander Barkov, who did not return in a 4-2 win at the New Jersey Devils on Saturday. The center was helped to the locker room after being hit in the left knee by the stick of Devils center Nico Hischier off a face-off with three seconds left in the first period. Florida (15-13-4) is 2-2-2 without Barkov in the lineup this season, and this is the last thing it needs with forwards Anthony Duclair (Achilles), Patric Hornqvist (head), Anton Lundell (upper body), Colin White (upper body), Chris Tierney (upper body), and defenseman Radko Gudas (concussion) already sidelined. Coach Paul Maurice said the win Saturday was because of “just will — grind, block shots, spit it out, spit it in, and get to the net.” The Panthers will need that in Boston, where the Bruins (24-4-2) are on an 18-game point streak (16-0-2), three from the team record set in 1973-74. Don’t expect them to let up. Coach Jim Montgomery isn’t happy with the Bruins going 2-0-1 to begin a five-game homestand. “I don’t think we’re playing very good hockey,” Montgomery said after a 4-2 victory against the Columbus Blue Jackets on Saturday. — Jon Lane, staff writer

All the Tage in Buffalo

There may not be a more exciting player in the NHL at the moment than Buffalo Sabres forward Tage Thompson, who is coming off a three-point game in a 5-2 victory against the Arizona Coyotes on Saturday. Thompson had a goal and two assists for the seventh three-point game of his season; Connor McDavid of the Edmonton Oilers is the only player that has more (nine). Thompson, who has multiple points in each of his past three games, will also continue chasing McDavid for the League goals lead when the Sabres visit the Vegas Golden Knights on Monday (10 p.m. ET; ATTSN-RM, MSG-B, ESPN+, SN NOW). Since Dec. 1, Thompson has more goals (11) than McDavid (10) and has one fewer point (20) than the Oilers center. For the season, McDavid has 28 goals and Thompson has 25. — Shawn P. Roarke, senior director of editorial

The Stars (18-8-6) are coming off a 5-4 overtime loss against the Carolina Hurricanes on Saturday, but they came back twice from two goals down in that game and have points in five of their past six games (4-1-1). Dallas forward Jamie Benn has scored in each of the past two games. He needs two points to get to 800 for his career, all with the Stars. The Blue Jackets (10-18-2) have lost three games in a row, scoring three goals total while allowing four goals in each.

The Red Wings (13-11-6) have lost five games in a row (0-4-1). The Capitals (16-13-4) are coming off a 5-2 win against the Maple Leafs thanks to defenseman Erik Gustafsson‘s first NHL hat trick, also his first three goals of the season. Washington is 9-3-1 in its past 13 games. Capitals captain Alex Ovechkin‘s next goal will be his 801st, tying Gordie Howe for second all-time in NHL history.

Panthers forward Sam Reinhart has scored in three consecutive games. He has six points (four goals, two assists) and is plus-4 while averaging 21:22 of ice time. The Bruins are the fourth NHL team with at least 50 points after the first 30 games of a season.

The Oilers (17-14-1) beat the Predators 6-3 on Tuesday, but have not won since, losing 4-3 in a shootout against the St. Louis Blues and 4-3 in regulation against the Anaheim Ducks. Edmonton forward Connor McDavid needs two goals to become the NHL’s first 30-goal scorer of the season. The Predators (12-13-4) have lost six straight (0-4-2). They have scored nine goals during the losing streak, including one goal in each of the past two games.

The Islanders (18-13-1) ended a three-game losing streak with a 5-2 win at the Golden Knights on Saturday, but Semyon Varlamov left late in the third period with an undisclosed injury. Varlamov is 4-0-1 in his past five starts. Ilya Sorokin is 0-5-0 in his past five. The Avalanche (16-11-2) have won three of four and have points in four of five despite not scoring more than three goals in any of the games. They haven’t scored more than three goals in eight straight games.

Sabres forward Jeff Skinner has scored at least one point in each of his past seven games (six goals, eight assists) to tie his career best, set two previous times. Vegas forward Reilly Smith has multiple goals in each of his past two games, including scoring both goals in a 5-2 loss to the Islanders on Saturday. Jack Eichel, the former captain of the Sabres, has not played for Vegas since Dec. 9 because of a lower-body injury.

The Blues (15-15-1) have won three games in a row and have points in four straight. St. Louis forward Jordan Kyrou has three goals in the past two games, including two in a 5-2 win against the Calgary Flames on Friday. The forward has 10 points (four goals, six assists) in the past eight games. The Canucks (13-14-3) are coming off a 5-1 loss to the Winnipeg Jets on Saturday. They have won four of their past six games, but haven’t won in regulation since Nov. 26, a span of nine games. Canucks forward Bo Horvat has nine goals in the past 14 games and 22 for the season.