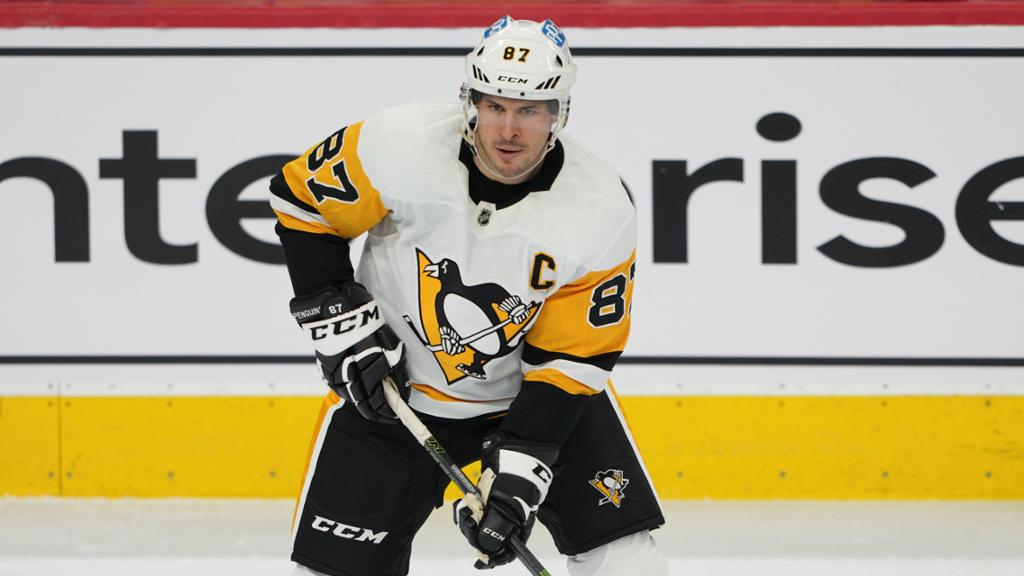 It appears Father Time has yet to catch up with Sidney Crosby. The 35-year-old center had three points (one goal, two assists) in each of the first two games to start his 18th NHL season for the Pittsburgh Penguins (2-0-0), who visit the Montreal Canadiens at Bell Centre (7 p.m. ET; SNE, RDS, ATTSN-PT, ESPN+, SN NOW). The Penguins captain moved into 19th place on the NHL’s all-time points list Saturday and has 1,415 points (519 goals, 896 assists) in 1,110 NHL games, the most among active players. He has 423 multipoint games in his NHL career, including 17 against the Canadiens, and 322 games without a point, with nine against Montreal in 43 career games. After a season-opening 4-3 win against the Toronto Maple Leafs on Oct. 12, the Canadiens have been outscored a combined 6-1 in two straight losses. Rookie forward Juraj Slafkovsky, the No. 1 pick in the 2022 NHL Draft, has no points, one shot on goal and is averaging 10:57 of ice time in three games for Montreal (1-2-0). — Mike G. Morreale, staff writer

The New York Rangers and Anaheim Ducks are going in opposite directions 10 days into the 2022-23 season: The Rangers won their first two games against the Tampa Bay Lightning (3-1) and Minnesota Wild (7-3) before losing 4-1 at the Winnipeg Jets on Friday, a game one can argue was stolen by Jets goalie Connor Hellebuyck (40 saves). Forward Artemi Panarin, my preseason pick to win the Hart Trophy as NHL MVP, is tied atop the NHL with Crosby in points (six points; one goal, five assists). He had one goal and three assists at the Wild and his 16 four-point games since joining the League in 2015-16 are fourth behind Connor McDavid (23), Nikita Kucherov (19), Leon Draisaitl (18) and Patrick Kane (17). The Ducks defeated the Seattle Kraken 5-4 in overtime to open the season but lost 7-1 to the New York Islanders on Saturday to start a five-game road trip that continues at Madison Square Garden (7 p.m. ET; MSG, BSSC, ESPN+, SN NOW). Coach Dallas Eakins said the loss was “embarrassing for everyone,” and called for “a little bit of soul-searching” and help for goalie John Gibson. It’s a common lament. Anaheim was 24th in goals per game (2.78) and 23rd in goals against (3.24) last season when Gibson faced 1,789 shots, ranking him seventh in the NHL. — Jon Lane, staff writer

It will be an early season litmus test for both the Florida Panthers and Boston Bruins, who are each 2-0-0, when they play at TD Garden (7 p.m. ET; TVAS, NESN, BSFL, ESPN+, SN NOW). Two games into the season, the Panthers are showing signs of growth in their defensive game, particularly in how to close things out in the third period. They took a one-goal lead early in the third against the New York Islanders on Thursday and shut it down from there before getting an empty-net goal for a 3-1 win. They took a 4-3 lead into the third against the Buffalo Sabres on Saturday and held the Sabres to five shots on goal in the final period for the one-goal win. But it gets tougher for the Panthers on Monday, when they play the third of three straight road games to start the season against the Bruins, who have wins at the Washington Capitals and at home against the Arizona Coyotes. They have struggled to hold leads, though; Boston led Washington 3-0 in the second period but gave up the next two goals before the second intermission. The Bruins scored twice late in the third for the 5-2 win. They had a 3-1 lead after two periods against Arizona, but the Coyotes tied it 5:42 into the third before the Bruins scored three unanswered goals for the 6-3 victory. — Dan Rosen, senior writer

Ducks forwards Ryan Strome and Frank Vatrano return to MSG for the first time since leaving the Rangers as free agents. Strome signed a five-year contract after scoring an NHL career-high 21 goals last season, and Vatrano, who signed for three years, had 13 points (eight goals, five assists) in 22 regular-season games with New York after he was acquired from the Florida Panthers. Rangers forward Sammy Blais is expected to play his first regular-season game since sustaining a torn ACL in his right knee against the New Jersey Devils on Nov. 14, 2021. He missed the start of this season with an upper-body injury.

Goalie Ilya Samsonov is expected to make his third straight start for Toronto (2-1-0) after Matt Murray was placed on long-term injured reserve Saturday and will miss a minimum of four weeks. The Maple Leafs also recalled forwards Wayne Simmonds and Nicholas Robertson, and defenseman Victor Mete from Toronto of the American Hockey League on Sunday. Defenseman Conor Timmins sustained an upper-body injury in the first period against the Bruins on Saturday and is questionable for the Coyotes (0-2-0), who have been outscored 12-5 to start the season.

Matthew Tkachuk scored in each of his first two games with the Panthers, and had an assist in the 4-3 win against the Buffalo Sabres on Saturday. The forward, acquired in a trade with the Calgary Flames in the offseason, has been a factor all over the ice and on the score sheet. Bruins forward David Krejci has four points (one goal, three assists) in his first two games since returning to the NHL after playing in his native Czech Republic last season.

Cole Caufield (29 goals, 22 assists in 80 NHL games) needs one goal to become the second-fastest to reach 30 goals with the Canadiens. Brian Savage scored his 30th goal in his 60th NHL game on Nov. 22, 1995. Jake Guentzel has four points (two goals, two assists) for the Penguins, who have scored at least six goals in each of their first two games of a season for the fourth time in franchise history.

The Canucks (0-2-0) are having trouble holding onto leads after going up 3-0 against the Edmonton Oilers before losing 5-3 to start the season, and 2-0 against the Philadelphia Flyers on Saturday before losing 3-2. Vancouver is 1-for-13 (7.7 percent) on the power play; it was ninth in the NHL (23.5 percent) last season. T.J. Oshie had a goal and an assist, and Alex Ovechkin had an assist for his first point of the season for Washington (1-2-0) in a 3-1 win against the Canadiens on Saturday.

The Red Wings (2-0-0) are playing their third game in four days; coach Derek Lalonde is the fourth coach to win at least each of his first two games in Detroit, following Jeff Blashill, Mike Babcock and Jimmy Skinner, who all began 3-0-0. Forward Kevin Fiala scored his first goal for Los Angeles (1-2-0) and had two assists in a 7-6 win at the Minnesota Wild on Saturday. Fiala was traded to the Kings by the Wild on June 29.

Marc-Andre Fleury allowed four goals on 14 shots and was pulled after the first period for the Wild (0-2-0) in a 7-6 loss to the Kings on Saturday; Filip Gustavsson made 17 saves in relief in his Minnesota debut. Center Nathan MacKinnon has four points (one goal, three assists) in two games for the Avalanche (1-1-0).

Mark Scheifele scored two goals in a 4-1 win against the New York Rangers on Friday for his 29th career multigoal game for Winnipeg (1-0-0), passing Blake Wheeler (28) for sole possession of second place in Jets/Atlanta Thrashers history (Ilya Kovalchuk, 46). Jake Oettinger has a 1.00 goals-against average and .968 save percentage in two starts for Dallas (2-0-0).

Matty Beniers has at least one point in each of the Kraken’s first three games (1-1-1), including an assist in a 5-2 loss against the Vegas Golden Knights on Saturday. He has 13 points (four goals, nine assists) in 13 NHL games, becoming the seventh rookie in League history to have a point in at least 12 of his first 13 games. Carolina (2-0-0) is playing the second of a five-game road trip; it won 2-1 at the San Jose Sharks on Friday.