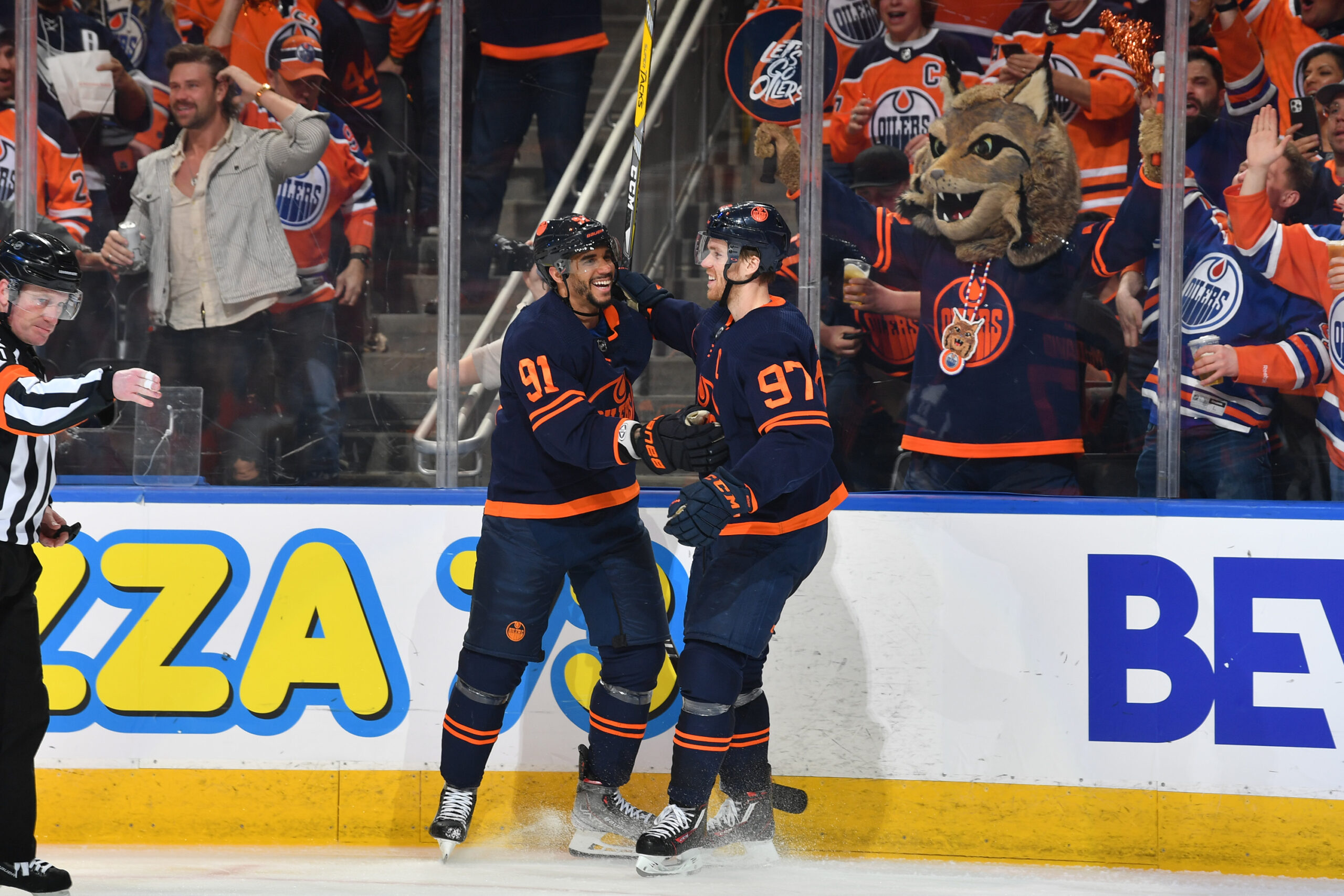 It’s early, but the Edmonton Oilers could be a team that finishes the 2022-23 season with at least five legitimate 30-goal scorers on the roster. A team that is going to continue to score goals and has arguably the deadliest power play in modern NHL history, there’s no reason to suggest Connor McDavid, Leon Draisaitl, Evander Kane, Zach Hyman, and Ryan Nugent-Hopkins can’t all score 30 or more goals this season.

Let’s take a look at why each has a shot.

With eight goals on the season already and two hat tricks in eight games, the fact that McDavid has been held goalless in half of his games this season has to be a scary thought for future opponents. Being held off the scoresheet is rare for the best player in the world and it’s clear he’s motivated to shoot more and reach that 50-goal marker for the first time in his NHL career.

The closest he’s come is 44 in one season but 30 is just a formality if he stays healthy. He’s been razzed about becoming a goal scorer and being a bit more selfish. Rightfully, his motivation is to finally get the Oilers to the Stanley Cup Final as the captain of the team. The good news for Oilers fans is that it’s evident he believes he can better help the team get there by scoring more often.

Leon Draisaitl Could Get 60

If there’s a player on the team who could pot 60 in a season, it’s Draisaitl. He’s scored 50-or-more twice in his career and hasn’t scored less than 30 since the 2017-18 NHL season. Draisaitl is a natural scorer who finds the open ice and is a go-to guy on the most dangerous power play in the league. He’s got a top-five NHL-caliber shot and his four goals on the season feel like he’s taken his foot off the gas pedal a bit: that’s how good he is.

Draisaitl has a legitimate shot to win the Rocket Richard Trophy this season.

Evander Kane Is Being Too Unselfish

After scoring 22 goals in 48 games for the Oilers last season, and another 13 goals in 15 games during their 2021-22 playoff run, it’s only a matter of time before Evander Kane starts being a bit more selfish (in a good way). He’s been deferring a lot to other players in the team’s first eight games — giving McDavid an empty-netter and passing off to Draisaitl in the closing seconds of the last game. He even had a goal called back that should have counted. When he decides he wants to score more, he will.

Realistically, Kane should already have four or five goals on the year, so his two seem a bit underwhelming. He’s about to break out and should have a game where he scores a couple to get himself right back on pace for 30. He’s on pace for just over 20 right now.

After scoring 27 a year ago, Zach Hyman is looking like he’ll break the 30-goal mark for the first time in his NHL career. The way he’s contributing at all ends of the ice and creating chances for himself, it almost feels like a given. Hyman has posted more than 20 goals in a season three times and he’s got four already in eight games. That’s a 41-goal pace and while he might let off a little, there’s still a ton of room to hit 30.

Hyman is a regular on the Oilers’ top-unit power play so there’s no reason to assume his production will drop off if the team keeps getting chances on the man advantage. What makes Hyman so unique is that he doesn’t need the power play to get his opportunities. He makes them regardless of the on-ice situation he’s facing.

The Nuge looks like a man possessed this season. He’s been incredible in all facets of the game and he’s played up and down the lineup, getting his chances and potting them at a far better clip than in recent seasons. He can play top-line wing with McDavid or center on a third-line that looks really good. And, because Ryan McLeod looks more than ready to be a regular NHL contributor, head coach Jay Woodcroft has the luxury of using Nugent-Hopkins in ideal situations that will help him produce offense.

The struggle for Nugent-Hopkins has been his 5-v-5 production in recent seasons but fans should remember he’s had seasons of 22, 28, and 24 goals (twice) in his career. It wouldn’t take much for him to reach 30 and he’s off to a fantastic start with five goals already.