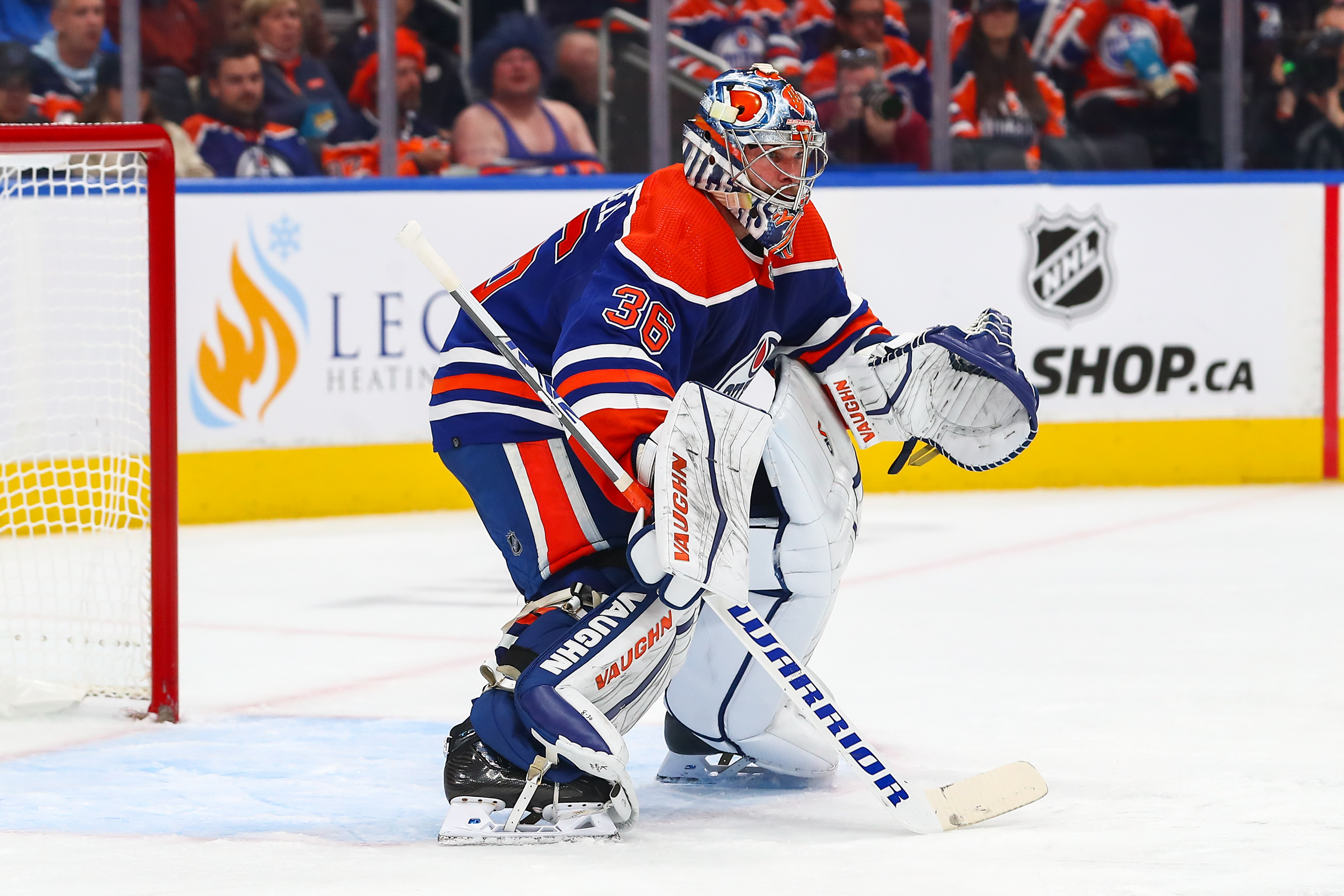 The Edmonton Oilers have not received what they paid for or expected from Jack Campbell in his first season with the team. Fortunately or unfortunately, depending on how things go, it’s early in his five-year contract worth $5 million AAV. It isn’t the best time for Campbell to start struggling, but at least the Oilers are equipped to deal with it.

Stuart Skinner has been the short-term (and hopefully long-term) solution in net and has assumed the number one job for now, which has allowed the Oilers to start winning games more consistently (four of the last five) and limit the goals against. In doing so, they also haven’t always had to outscore their problems, which regularly happened with Campbell. He may be 7-6-0 on the season, but he has a 4.12 goals-against average (GAA) and a .872 save percentage (SV%). Especially with the injuries to the forward group, it’s a lot to ask the team to consistently score four or five goals just to win.

The Calgary Flames have dealt with a similar issue, dating back to 2020-21. Here’s a look at how Jacob Markstrom and the Flames handled the situation then and how they are successfully handling the situation now to prove it could work out for Edmonton and Campbell.

Markstrom Bounced Back in a Major Way

In the summer of 2020, Markstrom was a free agent and signed a six-year, $6 million AAV contract with a full no-move clause with the Flames. The elite goaltender had just wrapped up a season with the Vancouver Canucks where he finished fourth in Vezina Trophy voting. His numbers weren’t amazing, but they were very good, considering he backstopped a team that shouldn’t have qualified for the playoffs. The 30-year-old finished the 2019-20 season with a 2.75 GAA and .918 SV% to go along with two shutouts, 11.4 goals saved above average (GSAA), and a record of 23-16-4.

The following season, Markstrom’s first with the Flames on his new lucrative deal, he regressed for a number of reasons. Those reasons could be exactly what Campbell is going through now. Markstrom had a 22-19-2 record and a 2.66 GAA, .904 SV%, and a minus-4.0 GSAA. Those stats prove the Flames were a good team and gave their goalie every chance to win, but he just couldn’t make a save.

Alongside Markstrom that season was Cam Talbot, who proved he could still be a starter and had better numbers across the board. He kept the Flames afloat, providing starts and good play when the team and Markstrom needed it. It is what is happening this season with both Skinner as Campbell’s backup and Dan Vladar as Markstrom’s backup.

After that down year, Markstrom came back better than ever and finished last season (2021-22) with his best GAA (2.22), SV% (.922), highest GSAA (26.1), and most shutouts (nine) in his career. He ranked second in Vezina Trophy voting, and his contributions in net helped the Flames win their division and squeeze by the Dallas Stars in the first round in a goaltending battle with Jake Oettinger. It took him a season of struggles before he figured things out. The hope for Edmonton is that Campbell doesn’t take that long, with Stanley Cup hopes hanging in the balance this season. But if it does, Skinner has been great, and that means they will be a dangerous tandem next season.

There are few legitimate starters still in the NHL, as most teams like to split goaltending duties. However, Markstrom and Campbell were both expected to be starters until poor play took that away from them. Regardless of their salaries, teams want to win, especially teams like the Oilers and Flames, who many thought to be Stanley Cup contenders at the beginning of the season.

Related: Oilers Trading for a “Nasty” Defenceman Is Risky But Necessary

Since both teams decided to run with their backup, it has raised some questions. The Los Angeles Kings made a drastic move by demoting Cal Petersen to the American Hockey League (AHL), and some wondered if that was a possibility for Campbell. It wasn’t solely Petersen’s fault the Kings were struggling, and it isn’t Campbell’s alone either. There are far too many defensive collapses and poor coverage, but Campbell hasn’t been able to make the saves he needs to.

Though it may not play a huge part in their struggles, Campbell is 31 years old, the same age Markstrom was in his first season with the Flames, and it would be unrealistic to expect him to continue putting up such horrible numbers. After struggling last season, he bounced back late and gave the Toronto Maple Leafs every chance to win in the playoffs. Patience will be key in waiting for Campbell to come around. The Oilers aren’t desperate for him to start playing well as long as they have Skinner between the pipes, but they also can’t be wasting $5 million on a goaltender who sits on the bench more often than not.