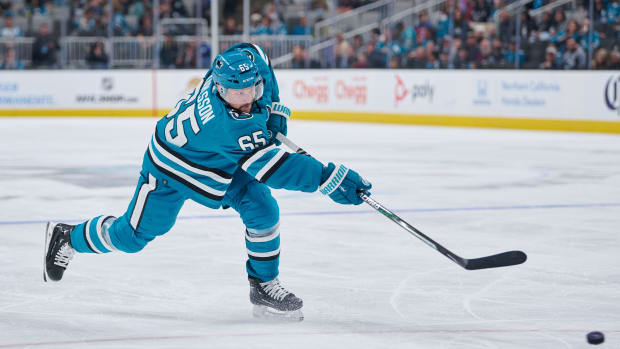 Welcome back to THN.com’s Three Stars of the Week feature, in which we identify the NHL’s very best players of the past seven days. We don’t give out star awards based strictly on the amount of offense a player has contributed, and the same goes on the defensive side. Players can earn a star in many ways, including an all-around elite showing, or a gigantic performance on one particular night. Let’s get to it:

3. Vitek Vanecek, New Jersey. The Devils goaltender had a stellar week, going 2-0-0, with a sparkling 1.29 goals-against average and .940 save percentage in three appearances. Vanecek started the season on a sub-par note, giving up five goals in his first game and then surrendering one goal on four shots in relief of starting goalie Mackenzie Blackwood in a 6-3 Devils loss to Washington Oct. 24. However, in the two games that followed, Vanecek was sharp, first allowing only two goals in a 6-2 win over Detroit, then posting his first shutout of the season in a 1-0 win over the defending Stanley Cup-champions, the Colorado Avalanche.

The 26-year-old Vanecek is in his first season of a three-year, $10.2-million contract after leaving the Washington Capitals this summer. He posted four shutouts for the Caps in 42 games last year, and he’s making a case to play at least that many games this season, although Blackwood has also been good for New Jersey out of the gate. Combined, the Devils are getting solid goaltending from the tandem, which is why they’re currently tied for second in the competitive Metropolitan Division.

2. Erik Karlsson, San Jose. His San Jose Sharks have struggled for the most part of the first month, but Karlsson has rediscovered his elite game – this week, in four games, the 32-year-old led all defensemen in goals (four) and points (six). Karlsson also logged a ton of ice time, averaging 23:57, including 21:27 of even-strength time – the fourth-best number among all NHL defensemen.

Last season, Karlsson posted 10 goals and 35 points in 50 games, but this year, he already has six goals and 11 points in as many games. The Sharks aren’t likely to be a very good team, and Karlsson has a full no-move clause in his contract, but the four years he has left on his contract (at a whopping $11.5 million salary cap hit per season) would be more palatable (with San Jose likely retaining some of the money on his deal) to a trade partner if Karlsson continues to play as well as he has thus far.

1. Connor McDavid, Edmonton. McDavid has been arguably the best player on the planet for years now, and this season, the 25-year-old got off to a white-hot start, putting up nine goals and 18 points in only nine games. This week, McDavid had four goals and eight points in four games, including a hat trick – his second of the season – and a four-point game – his second of the season – to lead all NHL point-getters.

McDavid’s Oilers teammate and fellow superstar Leon Draisaitl also had eight points in four games this week, and he deserves an honorable mention in this week’s Three Stars. But McDavid has been a scoring monster, with two even-strength goals and a pair of power-play markers while averaging 20:07 of ice time – 1:27 less than Draisaitl averaged this week.

We knew heading into the season that McDavid would dominate, but he appears to be taking his game to a new level, and he is very likely to earn the First Star of the Week multiple times before this year is through.