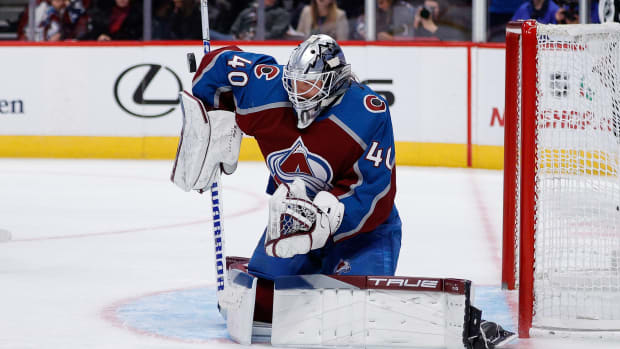 Happy holidays, and welcome back to THN.com’s Three Stars of the Week. This is a regular feature in which we point out the NHL’s three best performers of the past week. We usually file on Sunday, but with Christmas, we’re delayed by a day. As a result, this file is for the seven days from Dec. 18 to 24. These were the three biggest-impact players in that period:

Pettersson only played two games for the Canucks in the past week, but the 24-year-old made the most of them, putting up a five-point game (two goals, three assists) against Seattle on Dec. 22 and adding a pair of assists the following night against Edmonton to tie him for first place in points for last week. Petterson has 26 assists and 41 points in 31 games this season, putting him on pace to amass 65 assists and 102 points, which would demolish his career highs of 39 assists and 68 points.

Pettersson is in the second-last season of a three-year, $11.325-million contract, and unless something calamitous happens to him, he’ll be due for a significant raise despite being only a restricted free agent. Vancouver almost assuredly will get him locked up to a long-term deal, but there won’t be a “hometown” discount. He and his agent, Pat Brisson, will be seeking a superstar-level contract extension for a youngster just coming into his prime, and they’ll get it from the Canucks, regardless of whether the team is rebuilding or retooling on the fly.

Staal finished the week tied for the most points in the league, with seven (three goals, four assists) in four games. Most importantly, two of his three goals were game-winners for the streaking Hurricanes, who’ve won eight straight games and nine of their past 10 (9-0-1). The 34-year-old center is a fixture on Carolina’s third line, and with 10 goals in 34 games this year, Staal is on pace to score 24 this season – which would be his best goals total since he netted 25 in the 2011-12 campaign, his final season as a Pittsburgh Penguin.

Staal is having a solid year on offense despite averaging only 16:34 of ice time. He’s an invaluable presence for the Hurricanes – a physical force with a championship pedigree and a seasoned veteran’s calmness. He’s in the final season of a 10-year, $60-million contract, but he’s showing he’s got a lot of game still left in him, and it’s hard to envision him playing anywhere else than Raleigh at this point in his career. The Hurricanes will acknowledge him as a franchise Hall-of-Famer very quickly after he does retire, and he’ll be deserving of the honor.

The Avalanche are currently on a four-game winning streak, thanks in no small part to the massive contributions of Georgiev in Colorado’s net. The 26-year-old Russian had a phenomenal week, posting a 3-0-0 record in three games, and putting up fantastic individual numbers (0.94 goals-against-average, .965 save percentage and one shutout) for the Avs.

At a time when consistent goaltending is difficult to come by for many teams, Georgiev is a bargain cap hit, and one of the key reasons the Avs are in a playoff position despite being ravaged by the injury bug.