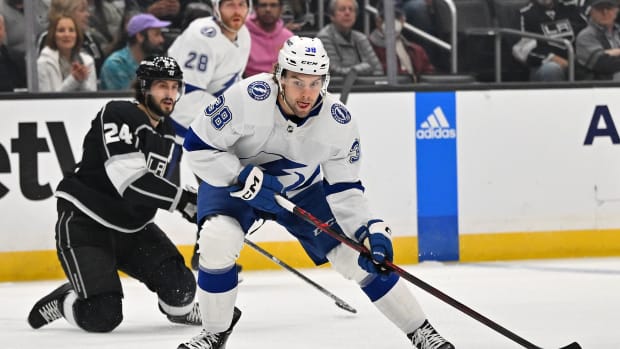 NHL players and coaches often talk about the little things that need to happen for a team to be successful.

Most of those things are intangibles. ‘Compete level’ is a buzzy term that scouts try to quantify. And even with puck and player tracking now in place, we still don’t have enough publicly available data to truly assess whether a skater is playing an ‘honest, 200-foot game.’

But on the NHL’s stats pages, there is a tantalizing ‘Miscellaneous’ category. Among the goodies there, you’ll find breakdowns of hits, blocked shots, giveaways and takeaways by team and by player.

This week on the NHL Stat Pack, here’s a look at whether the actions that are quantified on the Miscellaneous page seem to correlate at all with wins, losses and championships.

When the New York Islanders made their back-to-back trips to the Eastern Conference Final in 2020 and 2021, we heard a lot about how the club’s physical playing style was a key to their success.

Since Lou Lamoriello took the reins as GM in 2018, the Islanders rank third in hits-per-60-minutes of play at 25.62. The leading team over that span is the Ottawa Senators, at 26.67 — but they haven’t made the playoffs since 2017. Second place goes to the Pittsburgh Penguins, who are a perennial playoff participant but haven’t been out of the first round since the 2017-18 season.

Looking at hits in individual seasons, it seems like physicality is on the rise these days. Of the six highest-hitting teams since 2018, four are from this year: Pittsburgh, Ottawa, Philadelphia and Nashville. The 2021-22 Senators and Predators round out that top six.

Surprisingly, despite the undisputed toughness of their coach, Craig Berube, the St. Louis Blues ranked 24th in hits-per-60 during the 2018-19 season before they won the Stanley Cup. The Tampa Bay Lightning were more physical, ranking seventh in 2020 and ninth in 2021, and the Colorado Avalanche ranked 23rd in the 2021-22 regular season.

This season’s top four hitting teams are all currently outside a playoff spot through games played on Monday, Jan. 16 (Pittsburgh, Ottawa, Philadelphia and Nashville). The Islanders, Rangers, Capitals and Lightning are the heaviest hitters who are in playoff positions.

And while Vancouver’s Luke Schenn leads the league in hits so far this season (201), he plays more minutes as a defenseman than the league’s most physical forwards. The top three players in hits-per-60 with at least 20 games played this season are Nicolas Deslauriers of Philadelphia (23.59), Kurtis MacDermid of Colorado (23.56) and Michael Pezzetta of Montreal (21.52).

Coach John Tortorella is known for asking his players to block shots, and this year is no different. With 17.14 blocks per 60, Tortorella’s 2022-23 Philadelphia Flyers rank second in the category since the 2018-19 season.

With their many injuries, especially on the back end and in goal, the Golden Knights’ commitment to shot-blocking may be born more out of necessity than a stylistic preference. Cassidy’s Boston Bruins maxed out at 13.22 blocks per 60 in the first year of his tenure, in 2016-17, and are actually blocking more this year than they ever did for him, at 14.15.

In aggregate, since the 2018-19 season, the New York Islanders have been the NHL’s top shot-blocking team, at 15.48 blocks per 60. They’re followed by the Ottawa Senators, Golden Knights, Vancouver Canucks and San Jose Sharks.

Individually, Alec Martinez of Vegas leads the league this season in total blocks (141) and blocks-per-60 (10.74). He’s followed by Joel Edmundson of Montreal (8.59) and Philadelphia’s Rasmus Ristolainen (8.00).

This stat seems like it should be tightly correlated to success, right? Keep the giveaways to a minimum, and ride that wave to a deep playoff run.

The Minnesota Wild bought into that mindset and lead the NHL with just 5.51 giveaways per 60 this year. And while the Colorado Avalanche are a non-playoff team right now, it’s not a stretch to assume that their Stanley Cup pedigree is part of why they’re second at 5.89.

But five of the next six teams are also non-playoff clubs, and this part of the list may blow your mind. Next lowest on the giveaway scale in 2022-23, in order: Buffalo, Columbus, Vegas, Detroit, Vancouver and Philadelphia.

Does a larger sample size deliver results that make more sense? To some degree.

The Wild have also had the fewest giveaways-per-60 overall since the 2018-19 season, and we’ve got Cup-winners Colorado, Tampa Bay and St. Louis in second, third and sixth, respectively. The other two teams in the mix are a bit odd, though: Seattle and Columbus.

It appears this stat correlates fairly close to championship success compared to hits and blocks. That may bode well for Dean Evason and the Wild this spring.

On the flip side: it’s sometimes said that the league’s top offensive players give the puck away a lot because they have it on their stick so often.

This year’s stats bear that out. Among players with at least 20 games played, David Pastrnak leads the league with 4.72 giveaways per 60. He’s followed by Evgeni Malkin (4.39) and Mathew Barzal (4.29).

Three players with at least 20 games haven’t been charged with a single giveaway this season — although all play relatively limited roles: Patric Hornqvist of Florida, Brendan Lemieux of Los Angeles and Rasmus Asplund of Buffalo.

Did a player give the puck away, or have it taken from him? In puck battles, the difference can be very subtle.

But assertiveness seems to pay dividends. The six top teams in takeaways per 60 this season are all in playoff spots.

The Lightning lead the way at 9.86, followed by the Kraken, Oilers, Golden Knights, Maple Leafs and Hurricanes.

At the other end of the spectrum, the Los Angeles Kings surprisingly have the fewest takeaways per 60 this season (4.71), but the next four squads at the bottom of the list are all non-playoff clubs. In order from the bottom upward: Detroit, Arizona, Philadelphia and Anaheim.

We see a bit of a different story among the leaders if we look at the takeaways-per-60 since the 2018-19 season: Vegas leads the way at 9.20, followed by Carolina, Florida, San Jose and Calgary. The bottom of the list looks quite similar to this season: Los Angeles with the fewest, then Detroit, Philadelphia, Buffalo and Anaheim.

So while takeaways don’t seem to correlate very closely with Stanley Cup success, it’s interesting this seems to be a newly acquired skill for the always-dangerous Lightning this season.

The individuals who are tops at takeaways this season: Warren Foegele of Edmonton (4.2 takeaways per 60), followed by the Lightning’s Brandon Hagel (4.08) and another Oiler, Derek Ryan (3.94).

Evgeni Malkin also deserves a shoutout for coming fourth in the takeaway stat at 3.55. Presumably, that helps balance out his giveaways.