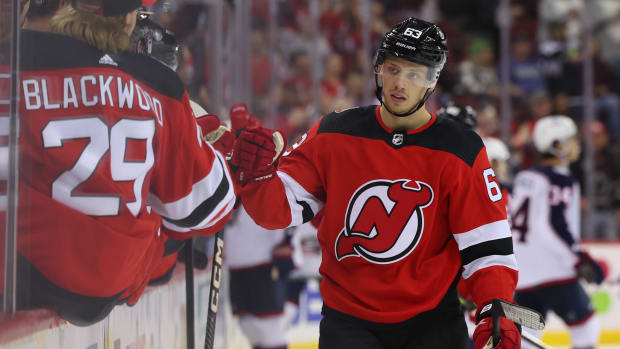 Happy Halloween! Another week of the 2022-23 NHL season is now in the books, so let’s dig into some numbers and see where the trends lie.

In tune with Monday’s festivities, here’s a trick, a treat and a very scary power-play blackout.

The Trick: The Competitive East

Last season, seven of the eight playoff spots in the Eastern Conference were locked in by U.S. Thanksgiving on Nov. 25, 2021, including all four in the Metropolitan Division.

This year, it looks like we’re in for a much tighter race.

After Sunday night’s games, just three points separate the Metro’s first-place New Jersey Devils (12 points) from the seventh-place Pittsburgh Penguins (nine points). Only the Columbus Blue Jackets have fallen off the pace, with a 3-7-0 record for six points.

Another tight race sees a five-way tie for third place in the tough Atlantic Division. Buffalo, Detroit, Tampa Bay, Montreal and Toronto all have 10 points, and Florida is just a hair ahead with 11. Boston looks solid with an 8-1-0 record for 16 points, and while Ottawa has a .500 record for eight points, the Sens are currently stuck in the cellar.

Over in the West, .500 records are good enough to keep two teams from each division in the wild-card hunt. Colorado and Minnesota are on the cusp in the Central and Seattle and Los Angeles hold down those spots in the Pacific. That division is already showing an 11-point differential between first-place Vegas (16 points) and last-place Anaheim (five points).

The Treat: The Dynamic Devils

What better team to spotlight on Halloween than the New Jersey Devils? They’re riding a three-game winning streak after dismantling the Columbus Blue Jackets by a 7-1 score on Sunday afternoon.

After dropping their first two games of the season, Lindy Ruff’s team has since gone 6-1-0. Their plus-eight goal differential is fourth-best in the league and so is their 93.1 percent penalty kill. They’re also channelling those old championship squads as the stingiest team in the league so far this year. Their average of 21.7 shots against per game is nearly five fewer than second-place Seattle (26.1).

On offense, Jesper Bratt continues to raise the bar for himself. He’s now sitting fifth in league scoring with 15 points. And the Devils have a well-balanced attack: five players have three goals or more.

The goaltending issue is still a bit of a question mark, but Vitek Vanecek is trending up. He has started the last three games, all wins, and allowed just three goals over that span. The Devils do have the NHL’s second-worst 5-on-5 save percentage at just 87.7 percent, but that number is amplified by the low number of shots allowed. Vanecek’s save percentage is an acceptable .908 but his goals-against average is a strong 2.08. Even Mackenzie Blackwood, with his .871 save percentage, has given up a not-outrageous 2.81 goals per game.

If the Devils can sustain their tight defensive structure, they should continue to have success. Up next, a three-game road trip through Western Canada. That starts with the Hughes brothers’ showdown in Vancouver on Tuesday before continuing on to Edmonton and Calgary.

On top of already falling off the pace in the standings, there’s plenty more to worry about in Columbus. The Blue Jackets are allowing 4.40 goals per game, the second-highest in the league. And in 10 games, they’ve yet to score a single power-play goal.

League-wide, power-play opportunities are up dramatically, from 2.89 chances per team per game in the last two seasons to a whopping 3.48 chances a game this year, the highest since 2010-11. Conversion rates have also ticked up again, from the 32-year-high of 20.61 percent last year to 20.68 percent so far this season.

Los Angeles has received a league-leading 47 power-play chances over 10 games this season — and scored nine goals. Columbus has had just 25 opportunities, but if they were at the league-average conversion rate, they’d have five power-play goals. Instead, they have none. And to add insult to injury, they’ve given up two tallies while shorthanded.

What’s even more confounding is that the Blue Jackets’ prize free-agent signing, Johnny Gaudreau, is a power-play ace. In his career, 171 of his 617 points have come with the man advantage, which is nearly 28 percent of his production. And Gaudreau is contributing at even strength in his new home. He leads Columbus with eight points in 10 games.

The Blue Jackets are now set to face off for a pair of games in Tampere next weekend, as part of the NHL Global Series. If there’s a silver lining within the disruptive trip overseas, it’s that their opponent for the next two games, the Colorado Avalanche, currently has the league’s fourth-worst penalty kill, with a success rate of just 69.7 percent.

Maybe the change of scenery will help the Blue Jackets bump this dismal slump.