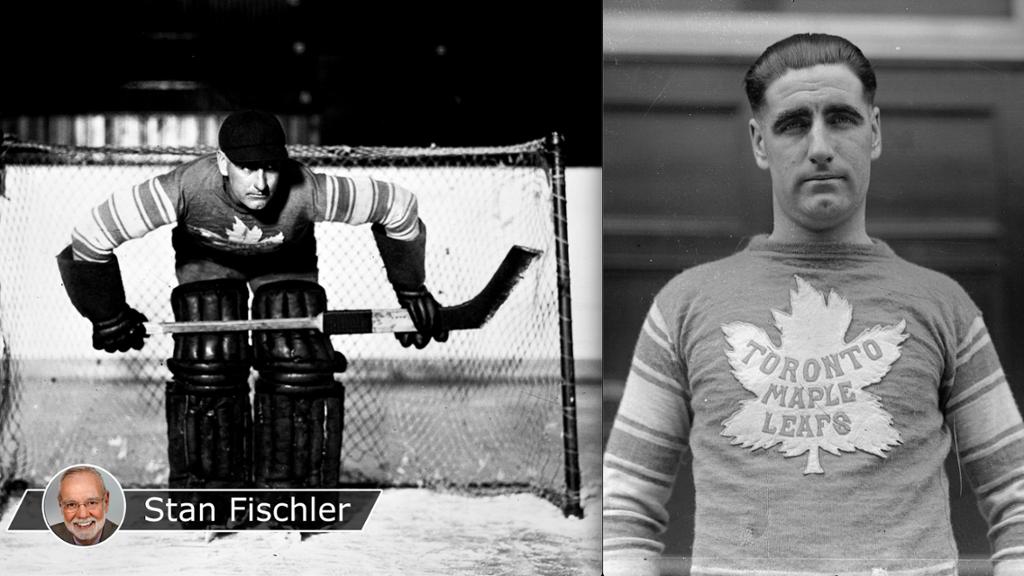 Legendary hockey reporter Stan Fischler writes a weekly scrapbook for NHL.com. Fischler, known as “The Hockey Maven,” shares his humor and insight with readers each Wednesday.

This week Fischler reveals how a rule that forced goalies to serve their penalties was revised after a mean-spirited game between the Boston Bruins and Toronto Maple Leafs at Boston Garden 90 years ago.

For the first 15 seasons in the NHL, rules stipulated that if a goalie received a minor penalty, he had to serve it in the penalty box for the full two minutes.

But on the night of March 15, 1932, a raucous game between the Toronto Maple Leafs and Boston Bruins at Boston Garden would help change that rule and enable a goalie’s penalty to be served by a teammate.

The rule turnabout was rooted in a rather innocent skirmish in the first period in front of the Maple Leafs’ crease. Bruins forward Cooney Weiland had fallen to the ice near goalie Lorne Chabot. As Weiland lifted himself back into position, Chabot delivered a friendly love tap to Cooney’s skate that sent the forward sprawling.

Referee Bill Stewart whistled Chabot for a two-minute tripping penalty. It marked the first time a goalie had to sit out his infraction in Boston.

Horner’s first test was a hard drive by Weiland which was stopped by Horner, who made a deft kick save. But on the very next Boston counterattack, Marty Barry powered one past the Horner’s flailing stick. Dismayed but not disheartened, Irvin yanked Horner and replaced him with another defenseman Alex “Kingfish” Levinsky.

“The Kingfish lasted only a dozen seconds,” said Bruins historian Jeff Miclash, author of “Total Bruins, 1929-1939.” “Barry got himself another power-play goal by beating Levinsky with a point shot and Irvin gave his second ‘goalie’ the hook.”

In went another Maple Leaf defenseman, Frank “King” Clancy. He made several saves and then Stewart whistled play to a stop and handed out coincidental minors.

“This gave the Bruins a 4-on-3 advantage,” Miclash explained. “The free ice allowed Eddie Shore to skate unopposed to the Leafs corner where he fed a short pass to George Owen who zipped a high shot over Clancy’s shoulder.”

In the unofficial NHL history, “The Trail of the Stanley Cup, Volume 2,” author Charles L. Coleman described the game as “an extraordinary contest.” As for the Maple Leafs reaction to Boston’s three goals against four goalies in two minutes, Coleman added, “Needless to say, all this performance caused (Toronto) manager Conn Smythe to blow his top. As referee Stewart skated by the Leaf bench Smythe reached out and grabbed him by the sweater. The referee ordered Smythe from the bench but he refused to leave.

“Attendants were called and attempted to give the Toronto manager the well-known bum’s rush. Some of the Toronto players intervened and punches were thrown.”

A Boston Globe photographer recorded the scene with a caption as follows:

Realizing that calm had to be restored, Bruins president C.F. Adams arrived at the boards with the riot squad.

“I only pulled at Stewart because he was blocking my view,” winked Smythe to Adams.

After consulting with Stewart, the Bruins owner persuaded the referee to allow Smythe to stay for the remainder of the game as long as he maintained decorum.

Stewart doled out 18 more penalties and the Bruins won the game 6-2. Despite his aggressiveness, Smythe escaped punishment and began a campaign in which he lobbied NHL owners to change the rule about goalies serving their own penalties.

“Smythe wanted to ensure that there wouldn’t be a repeat of the fiasco that started with his goalie serving his penalty,” wrote Miclash.

It took six months for Smythe to push a new statute in the rule book. The feat was accomplished at the NHL semi-annual meeting, October 1st, 1932, 90 years ago. The revised rule read as follows:

If a goalkeeper is removed from the ice to serve a penalty, the manager of the club shall appoint a substitute.

Conn Smythe had lost the battle but won the war.