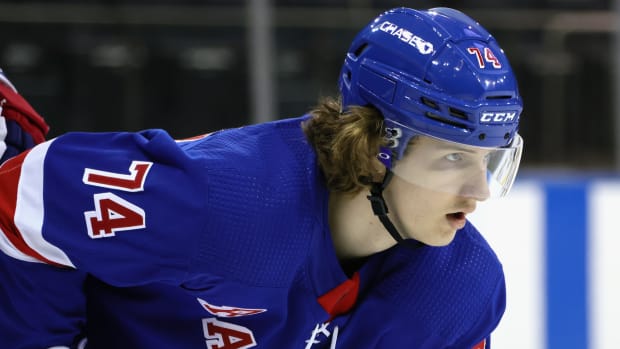 Published every Wednesday, we will take stock of all 32 teams and move them up and down as the season progresses based on their weekly performance. The reason? To ascertain a clear hierarchy of teams by the conclusion of the season, and also because lists are fun. (Scroll to the very bottom to see your favorite team).

Last season, 15 of the top 16 teams on the final Power Rankings (April 27) ended up making the playoffs, with the 16th-ranked Canucks narrowly missing and the 17th-ranked Kings qualifying instead.

Entering today, only six teams – Knights, Lightning, Kings, Rangers, Sharks, Preds – have played. Their recent performances have been taken into account; the Preds move up on the strength of their sweep of the Sharks at the Global Series, while the Rangers and Knights pass the Lightning and Kings, respectively, after last night’s wins.

This week’s Power Rankings will focus more on the new young faces we will see on each team. Next Wednesday, when all teams have played at least one game, the season-long Power Rankings should start to see significant change.

Fresh face: Ben Meyers, who signed as a free agent after three seasons at the University of Minnesota. Meyers is a well-decorated forward who won USHL and Big 10 championships, wore the ‘C’ in his final collegiate season and also represented USA at the Worlds and Olympics. Meyers will start on the fourth line.

Fresh (old) face: Vitali Kravtsov, who earned the coveted spot opposite Artemi Panarin only to suffer an injury. Young defensemen Braden Schneider and Zac Jones played a combined 25 error-free minutes, reminding us that the Rangers still have plenty of young talent coming through.

Fresh face: Cole Koepke, another grad from their AHL system and played 7:51 in his NHL debut. The Lightning have been very successful at developing talent, so there should be plenty of optimism in Koepke’s ability to succeed. Alex Barre-Boulet gets leapfrogged again.

Fresh face: Pyotr Kochetkov, who made his NHL debut late last season and ended up playing four games in the playoffs. Considering Frederik Andersen and Antti Raanta’s injury history, we will likely see Kochetkov at some point this season even though he’s the No. 3.

Fresh face: Nick Robertson, who was assigned to the AHL for cap reasons and will get recalled once the Leafs resolve their LTIR issues. Denis Malgin also won a roster spot in his second stint in the Big Smoke, but Robertson has far more upside.

Fresh face: None, because this is a veteran team going for the Cup. Only four regulars are 25 or younger: Dillon Dube, Oliver Kylington, Noah Hanifin and Rasmus Andersson. Darryl Sutter would also like you to know they have a winger who has won Cups.

Fresh face: Dylan Holloway, who could be their second-best natural winger behind Evander Kane after a one-year apprenticeship in the AHL (22 points in 33 games) following two seasons at the University of Wisconsin. He’s a dark-horse Calder candidate if he can stay on Leon Draisaitl’s line all season.

Fresh face: None, because Grigori Denisenko and Aleksi Heponiemi were cut again. Their youngest will be Anton Lundell, who is 21 years old and plays like a 10-year veteran. Someone check his birth certificate.

Fresh face: None. It would’ve been Scott Perunovich, but a shoulder injury will sideline him for at least half the year, and newly acquired Dmitri Samorukov will start in the AHL. There is a youth movement, however, with Jordan Kyrou and Robert Thomas as the new franchise pillars.

Fresh face: Pierre-Oliver Joseph, who played 20 games over the past two seasons but is now prepared to play a regular role. POJ is expected to start on the third pairing and mop up any minutes left behind by Kris Letang, Brian Dumoulin and Jeff Petry.

Fresh faces: Marco Rossi, who will start the season on the fourth line, and Calen Addison, who is a PP specialist at this point, but it’s a good bet both will see their minutes increase over the course of the season. The Wild need their young players to outperform the value of their ELC’s to be competitive.

Fresh face: Kiefer Sherwood, who had an excellent start in Czechia with two points after winning a spot on the second line out of camp.

Fresh face: Jakub Lauko, who was the most surprising name on the Bruins’ opening roster. The Czech-born forward was a Memorial Cup and QMJHL champion with Rouyn-Noranda and spent the past two seasons in the AHL. Trent Frederic, Jack Studnicka and A.J. Greer will also be fighting for bottom-six minutes.

Fresh faces: Joe Snively and Aliaksei Protas, both of whom played last season and secured a spot for opening night. Protas will be hard to miss – he’s 6-foot-6 and will open the season on a second line with Anthony Mantha (6-foot-5) and Dylan Strome (6-foot-3) that needs to come up big (literally) to take some pressure off Alex Ovechkin and fill the void left by the injured Nicklas Backstrom.

Fresh face: Paul Cotter, one of the few Vegas draft picks who was not traded for some marquee player – quite the feat. He had a seven-game stint last season and showed well in the season opener putting several shots (of very many) on Jonathan Quick playing on a line with Nicolas Roy and Keegan Kolesar.

Fresh face: Brandt Clarke, a smooth-skating defenseman who loves jumping up on offense. Clarke made the squad as their seventh defenseman and did not play in the opener, but when he does play, he will likely be deployed as a power play specialist with minimal even-strength usage.

Fresh face: Wyatt Johnston, whose career trajectory has resembled a shooting star. Two years ago, he scored only 30 points in 53 games in the OHL, and now he’s set to center the Stars’ third line. Shoutout to Ty Dellandrea, who will (hopefully) be a full-time NHL player this season.

Fresh face: Andrei Kuzmenko, the KHL all-star who joined the Canucks this summer. He’s shown impeccable chemistry with Elias Pettersson and gets plenty of minutes on the power play.

Fresh face: What, you think Lou can handle the hoodlums of today?! No chance! Go set your alarm! Lou has gone back to his old well yet again and digs out Nikita Soshnikov from the KHL, four years after Lou traded him from the Leafs to the Blues. Presumably, Soshnikov is wiser and better after spending the past three seasons in the KHL, but he’s also 28 years old with no top-six upside.

Fresh face: Saku Maenalanen, a 28-year-old former Hurricane and Liiga and KHL veteran whose name I will copy and paste from this page for the rest of the season. Top prospects Chaz Lucius and Brad Lambert were cut, and so was Jansen Harkins, a former fan favourite. This is a no-fun Rick Bowness team, alright.

Fresh faces: The most obvious is Jake Sanderson, who would’ve played a few games last season if not for an injured hand, but the most intriguing is Shane Pinto, who suffered a season-ending injury five games into the season last year and has all the makings of a very good No. 2 pivot.

Fresh face: Elmer Soderblom, a sixth-round pick from 2019 who made the club after finishing third in scoring in Frolunda in the SHL last season. (Where do the Wings keep digging up these guys?) Soderblom will form a very heavy third line with Michael Rasmussen (both are listed at 6-foot-6, but Soderblom looks bigger and is listed as 6-foot-8 elsewhere) and Oskar Sundqvist, with an average weight of 213 lbs.

Fresh face: Daniil Tarasov, who appeared in four games last season and will serve as the backup until Joonas Korpisalo (hip) returns. The Jackets treat Elvis Merzlikins like a workhorse, which limits Tarasov’s playing time. Tarasov was Pyotr Kochetkov’s running mate for Russia at the 2019 world juniors.

Fresh faces: Alexander Holtz, 26, and Fabian Zetterlund, 24, who finished first and second in goals with AHL Utica last season, and also 2022 top pick Simon Nemec. Holtz has the most upside on offense and will open the season on the top line with Jack Hughes.

Fresh faces: Jack Quinn, last year’s AHL rookie of the year, 2021 first overall pick Owen Power and German import John-Jason Peterka, who led AHL Rochester in scoring last season. I picked the Sabres to be the next team to win their first Cup in a THN staff survey (stay tuned), so you know how I feel about this group.

Fresh faces: Matty Beniers and Shane Wright, and if all goes right, they will terrorize the Pacific Division for the next two decades. Beniers is a Calder front-runner given his top-line role, while Wright will have to make his way up from the fourth line.

Fresh face: Mason McTavish was yesterday’s news. Undrafted signee Pavol Regenda, 22, has been turning heads all pre-season, having signed with the Ducks after emerging as one of the Slovak league’s top players (39 points in 45 games) last season playing in the eastern city of Michalovce, which borders war-torn Ukraine.

Fresh face: None, as top prospects William Eklund and Thomas Bordeleau were both kept out of the lineup in Czechia and assigned to the minors upon their return. It was good to see the Sharks keep pace with the Preds, but they’re obviously not a very good team.

Fresh faces: A ton, and because they have to. Sean Couturier and Ryan Ellis are injured, and Cam Atkinson’s status for the opener is still TBD. That means the Flyers’ season-opening lineup might feature forwards Wade Allison, Noah Cates, Tanner Laczynski and Hayden Hodgson, defensemen Egor Zamula and Ronnie Attard, and goalie Samuel Ersson. Now close your eyes and see if you can name three of the ones I just mentioned.

Fresh face: Juraj Slafkovsky, of course. But have you seen that defense? David Savard followed by journeyman Chris Wideman and four rookies: Kaiden Guhle, Arber Xhekaj, Jordan Harris and Johnathan Kovacevic, whom they just plucked off waivers from the Jets. The Habs’ 3.87 goals against per games played last season was the worst in the cap era, and I think this team might smash that. Jake Allen, I think you should’ve asked for more money.

Fresh face: Dylan Guenther, who is their best prospect currently signed and noticeable right away for his high work rate and offensive talent. He’s a bold offensive player who likes taking chances, but you wonder if it’s better for his development to stay away from a team that is going to lose a lot of games. To be fair, not many people will see them lose in a 5,000-seat arena anyway.

Fresh face: Filip Roos, an undrafted defenseman who played 50 games for third-place Skelleftea in the Swedish League last season. The Blackhawks pounced on him early, signing Roos to an ELC in April. The bar isn’t set very high – they just claimed Jarred Tinordi off waivers and he’s slotted on their second pairing for the season opener – but these are the players the Hawks should be focusing on as they exit the Toews-Kane era.