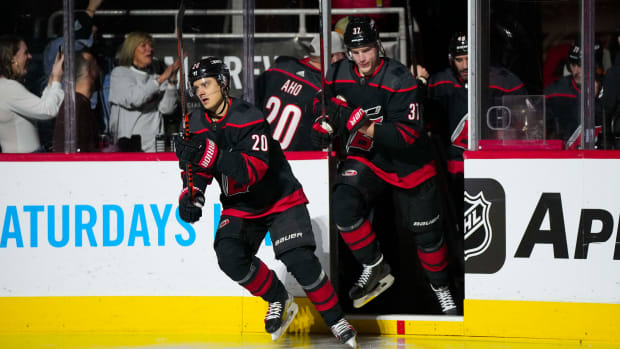 This is what the top eight looked like at the end of the calendar 2021 based purely on points percentage:

Of the 16 teams listed, 14 of them made the playoffs with the Stars and Kings replacing the Knights and Ducks. That means the standings were pretty much set from then on, with only playoff seeding yet to be determined.

This season, entering the final week of calendar 2022, the top eight seeds look like this:

In last season’s final Power Rankings (April 27), 15 of the top 16 made the playoffs. By no means is this list definitive, but it reinforces the notion that by the second half of the season, we have a pretty good idea of which teams will make it and which won’t. Note the Power Rankings rank teams regardless of division or conference, which means the top 16 may not be equally represented, but it should be an accurate representation of the league’s hierarchy.

Of the top 16 teams on the list but sitting outside the current playoff picture in the East, the Sabres seem to have the talent to make a late charge and backdoor their way into a playoff position. The Islanders and Wings are also in contention, but both teams also face questions about competency and consistency. If there was one team that could potentially drop out, it’s the Devils right now, given their string of losses lately and a goaltending situation that’s on shakier ground. Perhaps they should start up the “Fire Lindy!” chants again.

Of the teams on the outside looking in the West, other than the Kraken and Oilers who are currently in a playoff position but outside the top 16 on the Power Rankings – they’re 18th and 17th, respectively – the Flames would be the most obvious choice to make the cut. The Canucks and Blues may be in the hunt, and both teams have crawled from the depths of the league to make the playoffs – in the Blues’ case, they somehow won it all – but they’ll need incredible second-half performances to do so.

Here are this week’s power rankings with some help from moneypuck.com’s Playoff Odds calculator, not including Tuesday’s results.

Playoff odds: 99.1%. The Canes have now won nine in a row, and they’ve lost only once (!) over the past month, which was an overtime loss against the Ducks, of all teams. Antti Raanta guided them to a 3-0-0 record over the past week, including starting back-to-back games, and he wasn’t even that sharp, which shows you just how good the Canes really are. By the way, Max Pacioretty looks like he’s returning soon.

Playoff odds: 99.9%. They’re still the best team in the league but relinquish the top spot this week, no thanks to a shootout loss against the Sens where they went 0-for-3. The Bruins have been the most consistent team this season, ranking in the top three since late October.

Playoff odds: 99.2%. The annual panic in the first two months of the season in Leafsland has long since been forgotten. They’ve won three straight, including an impressive 4-1 win against Tampa, and gone 7-2-1 in their past 10.

Playoff odds: 92.3%. Jake Oettinger has allowed two goals or less in six of his past seven starts, the only blemish coming against the Oilers. No one had the Stars winning the Central, which has been a lot weaker than expected.

Playoff odds: 88.2%. Friday’s game against the Sabres was postponed, so the Lightning played just one game last week, an ugly 7-4 loss the night after a loss to the Leafs. The luster of being the two-time champs has kind of worn off, and they’re not the juggernaut they once were.

Playoff odds: 86.7%. When you can get solid goaltending from both of your goalies, winning games becomes a lot easier. Bill Guerin has made some head-scratching moves, but it all ends up working pretty well for him. You don’t have to read much into it, but since acquiring Ryan Reaves, the Wild are 10-4-0, fifth-best in the league.

Playoff odds: 95.5%. The Devils are a near-lock to make the playoffs which poo-poos whatever I said about them in the introduction. However, they have lost eight of their past 11, and in their most recent games pulled Vitek Vanecek for Mackenzie Blackwood, started Blackwood, and then pulled Blackwood for Vanecek.

Playoff odds: 90.1%. Injuries are a factor, but the Jets have now lost three in a row and six of their past nine. The offense just isn’t there, and Rick Bowness has gone the nuclear option stacking Mark Scheifele with Pierre-Luc Dubois and Kyle Connor, but you can only do so much with no quality scoring depth.

Playoff odds: 87.6%. What a year-end run by the Caps, who have lost once in their past 11 games and, thanks largely to Charlie Lindgren, have allowed more than two goals just twice during that span. The Devils have three games and two points in hand, but the Caps’ upcoming schedule is soft like Charmin: Montreal, Nashville, Columbus twice and Philadelphia twice. No one should be surprised if the Caps end up catching the Devils.

Playoff odds: 38.5%. After Tuesday’s win against the Pens, the Isles are just one point out of a wild-card spot and two points out of the top three in the Metro, so their playoff odds will have moved up. They’ve won their past two games by a 10-2 score but overall, still have lost five of their past eight.

Playoff odds: 75.0%. The Pens can probably make the playoffs, but the Metro is an absolute bloodbath. Second place and sixth place are separated by just four points, and the Pens are slipping a little bit with three losses in their past four.

Playoff odds: 29.2%. Due to unco-operative weather, the Sabres have not played since Dec. 19 and may not play until after Dec. 29 if the Wings can’t fly into Buffalo. You may be still able to find them at your local pub, though.

Playoff odds: 48.7%. After flirting with .500, the Rangers rattled off seven straight wins, but now have lost two of their past three, both of them to division rivals. The good news is that was the best stretch the Rangers have played this season; the bad news is that they still don’t look as good as they did last season.

Playoff odds: 91.7%. Their odds seem awfully high, considering the beating their roster continues to take. Gabe Landeskog and Bowen Byram are not close to returning, Pavel Francouz is out and they just lost 6-3 to the friggin’ Coyotes. When healthy, the Avs are a force, but staying healthy seems to be impossible this season.

Playoff odds: 75.7%. Pheonix Copley is single-handedly saving the Kings’ season. They’ve won five of their past six thanks to him, and sit second in the Pacific, even though they had arguably the worst goaltending in the league.

Playoff odds: 72.1%. An emphatic win against the Flames thanks to Stuart Skinner’s incredible performance, but the Oilers should not be relying on him to win games.

Playoff odds: 76.6%. Yes, probably a little low for the second-best team in the Pacific by points percentage, but they’ve also lost six of their past nine and since Dec. 1 have allowed the ninth-most goals per game. Their goaltending and lack of structure sometimes make them an unconvincing playoff team, and if they do make the cut, they should thank the Pacific for stinking.

Playoff odds: 88.4%. The good news is that Jacob Markstrom, Jonathan Huberdeau and the offense are looking much better. The bad news is they still have not managed to win more than three games in a row this season.

Playoff odds: 8.0%. Pierre Dorion makes some bold proclamations that are hard to walk back. He said “the rebuild is done,” but at what point is it really done? The Sens have a collection of young talent but too often scramble to put together consistent performances, and they’ve had five separate streaks of wins or losses lasting at least three games.

Playoff odds: 5.3%. They snapped a six-game slide with a win against Tampa, Jakub Vrana’s returning soon, and Robby Fabbri could join the team in January. It’ll be interesting to see the Wings at full strength but, please, can we pair Moritz Seider with someone else other than Ben Chiarot?!

Playoff odds: 23.9%. It’s actually just painful to watch Paul Maurice furrow his brow trying to figure out what’s wrong and Sergei Bobrovsky flail at pucks. Nothing’s in sync for this team, who have lost seven of their past 10. The Panthers have never made the playoffs three seasons in a row.

Playoff odds: 3.8%. Management probably believes their playoff odds are much higher, which explains why they’re so often out of sync with their fanbase. The Canucks have won three straight, but ironically, winning games may not be in their best long-term interests. Bo Horvat is going to command $9 million per season, and the Canucks will fail to both re-sign him or trade him at the deadline, as is tradition.

Playoff odds: 9.0%. Three straight losses, 15 goals allowed and so far away from their Cup-winning identity as a stout, structured, even-strength beast. Part of it is the alarming rate of Ryan O’Reilly’s declining play. Is it an injury? Systems? Something else? He’s minus-26 through 35 games and winning far fewer faceoffs than usual.

Playoff odds: 3.5%. Low playoff odds, but a huge fun factor. That win against the Avs was impressive, but really, they’ve just continued to exceed expectations under Andre Tourigny. They’re 5-3-1 since the end of their gruelling 14-game road trip that ended up with an 8-2 loss to the Oilers.

Playoff odds: 1.7%. The Habs haven’t been able to string together two wins since Nov. 25, losing nine of their past 13, and it makes a lot of sense if you look at their roster right now with five rookie defensemen. The Habs are one of the few franchises at the bottom of the list where the record does not indicate the optimism of the fanbase.

Playoff odds: 16.1%. Look, 15 playoff appearances in 25 seasons are pretty good, but this team is dying a slow death this season, and it’s just painful to watch. Sometimes, a guy will stick around long enough to see some success if they avoid any big mistakes, and that sounds like David Poile. A set of fresh eyes might breathe some fresh air into this team stuck in purgatory.

Playoff odds: 4.0%. They’ve lost four of their past five, and aside from Timo Meier and Erik Karlsson, they barely resemble a hockey team most nights. It shouldn’t be hard to figure out what the right path is from here on out for Mike Grier.

Playoff odds: 0%. Mathematically, the bottom four teams all have a chance to make the playoffs. So, there’s a chance.

Playoff odds: 0.1%. Moneypuck was feeling a little generous, I guess.

Playoff odds: 0%. They’ve lost six in a row. They have two goalies named Elvis (Merzlikins) and Jet (Greaves, and I think they might have more success forming a band.