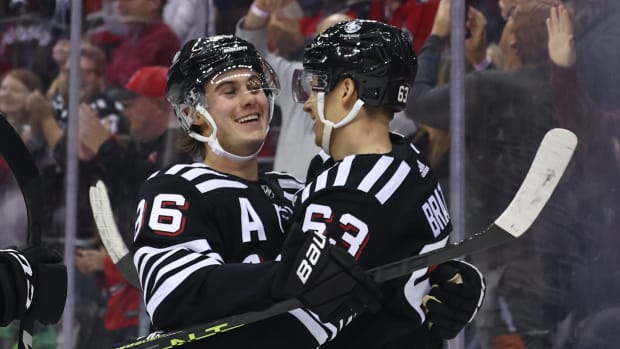 With a league-leading 21 wins, the Devils are the No. 1 ranked team for the second week in a row, joining the Bruins and Avs to be the only teams to hold down the top spot for multiple weeks.

It’s become a three-headed race at the top with the Knights joining the fray, who move into the second spot this week thanks to a shootout win in Boston.

The Leafs are the only team to drop out of last week’s top five but not necessarily through any fault of their own. The Jets had more convincing wins and Toronto’s overtime loss to the Lightning certainly knocked them down a peg, but they bounced back and shut out the Stars thanks to Matt Murray’s 44 saves.

The biggest drops this week include the injury-riddled Avs, the very inconsistent Caps and the Blues, who thankfully just ended a four-game losing streak but have lost six of their past eight. I for one, however, would like to see what Jordan Binnington is like in a full-scale meltdown.

The competition was not stiff (Flyers, Hawks), but no one can deny that their season so far has been mighty impressive, and all the stats back up the notion that they’re legitimately good. Their cap situation also ensures that they can be competitive for the next few years. With six impending UFAs, they have more than $35 million in projected cap space next season.

Reilly Smith’s shootout winner ended the Bruins’ unbeaten streak at home in an emotional return for the normally stoic Bruce Cassidy, so the Knights slip into the second spot this week.

A revenge game is in the works on Sunday when the Bruins visit Las Vegas, and they can conserve their energy despite playing on the road Wednesday in Colorado and Friday in Arizona.

They just won’t go away. An overtime win against the Leafs was yet another dagger into their hearts, and the return of Anthony Cirelli should give them a huge boost. The Lightning are not in the elite tier this season – too much depth lost and Andrei Vasilevskiy hasn’t been Vezina-caliber – but no one would dare cross them off as a contender.

It’s one of those things where a significant loss ends up bringing everyone together. An overtime loss to the Lightning aside, the Leafs have actually been excellent, and all things considered, they’ve managed their goalie situation very well.

The Hurricanes are scoring again, which is great because it’s about time. Their analytics – both possession and expected goals – are top-notch, and once again, they’ve found excellent goaltending from the unlikeliest of sources.

There’s no denying the Stars are an excellent team, and the Peter DeBoer bump is real, but they had two uncharacteristic losses this past week. Jake Oettinger got a rare pull in a 6-5 shootout loss, and then the team failed to capitalize on any of their 44 shots against the Leafs. Jason Robertson has been dynamite, but little brother Nick gets the last laugh in that one.

It’s hard to tell if the Isles are a dark horse or a real contender. After reeling off four wins in a row, they’ve lost three of their past four with their only win coming against the awful Hawks. There have only been two seasons in the cap era where the Isles have had two centers who scored at a near point-per-game pace: 2017-18 with Mathew Barzal (1.04 P/GP) and John Tavares (1.02), and this year with Barzal (1.04) and Brock Nelson (0.96).

Like the Leafs, they’re getting results despite missing a top player. Their depth is still somewhat concerning – Eric and Marc Staal were serviceable players last decade, not this one – but that Matthew Tkachuk trade looks like a pretty good win right now with the way he’s been playing.

Too low? Perhaps, but watch the Kraken play and it’s a bit of a wonder how they’ve managed to rattle off so many wins. Their team shooting percentage has come down after scoring just three goals in their past two games, both losses.

The middle of the pack feels right for the Wings, even though their record seems pretty impressive. Who would’ve guessed their best defenseman this season would be Filip Hronek?

Oof. Their injury list reads like an all-star team with three forwards from their top six at the beginning of the season missing from the lineup, and that’s not including captain Gabriel Landeskog. The early prognosis is Nathan MacKinnon will miss about four weeks. One name that’s intriguing: 2021 first-round pick Oskar Olausson, who played only 7:02 in his NHL debut but may get another crack at it now. Also, we’ll see just how good Mikko Rantanen is having to carry this team.

The Pens are hot again with three straight wins despite having one of the worst power plays in the league and with Kasperi Kapanen – of all people – scoring a hat trick. Sidney Crosby is aging like fine wine, and Kris Letang is already skating days after suffering a stroke.

That’s four straight wins for the Wild, which also happens to describe how they did it: a minor scare against the Coyotes, a comeback win against the Oilers and then back-to-back shootout wins despite having travel in between.

Dan Vladar has won two straight games and started five of their seven games. Is this how the Flames’ season is saved? Or will they have to get another player from the Canucks again?!

Has any other team squandered more talent than the Oilers? In the post-Gretzky era, the Oilers rank a paltry 28th in points percentage even though they’ve had 16 top-10 picks, including four No. 1 picks.

The Kings should be a lot better than their record suggests. Their .880 team save percentage is the lowest in the league, according to hockey-reference.com, which is tied with the Kraken last season and the Flyers the season before that. It’s historically bad.

You get the feeling the Sabres are one hot streak away from making the playoffs. It’s going to have to happen at the right time, but it’s interesting that they have to win more than three games in a row this season, which they’ve only done once (!) since the 2019-20 season. The Peterka-Cozens-Quinn line has also been low-key excellent lately.

They’re going to sneak into the playoffs again, aren’t they? The Preds practically created sports purgatory.

The Canucks remain one of the most fascinating clubs in the league, and their dysfunction has gone from Bluth-level comedy to something more akin to Waystar Royco, where it’s become self-destructive and hard to watch.

We should’ve seen that Shane Wright revenge game coming a mile away. First, the Habs blow a 4-0 lead after one period, and then Wright gets called up after scoring four goals in five games with Coachella Valley.

The Rangers have all the pieces but many times look absolutely listless. Gerard Gallant has never lasted more than three full seasons as the head coach with any club.

Just when you think the Sens are turning the corner, they score just two goals against a team with bad goaltending and watch their own starter implode. It’s always one step forward and then two steps back with the Sens.

Losing six of your past seven will certainly drop you down the power rankings like a rock, and Binnington hasn’t won a game in two weeks. It wouldn’t be surprising if the Blues turned to Thomas Greiss for an extended period, literally putting Binnington’s childish antics in a timeout.

This feels like a lost season for the Caps, who elected not to make any significant changes to their roster aside from signing Darcy Kuemper, who is now taking a backseat to Charlie Lindgren. With “only” 13 goals and a minus-14 rating in 27 games, this is shaping up to be one of Alex Ovechkin’s worst seasons.

Give credit to the Flyers; they play hard but don’t win many games. John Tortorella must’ve known this coming in, and so should everyone else except GM Chuck Fletcher with one glance at their roster, but kudos for not rolling over for the defending champs.

Whether it’s Elvis Merzlikins or Joonas Korpisalo in net, it doesn’t matter. They can’t score consistently, they don’t defend particularly well and their special teams are certainly special in the most derogatory sense of the word.

The Coyotes have not ranked in the bottom three for seven weeks in a row. This is the part of the program where we start passing out participation medals.

The most interesting story to come out of Anaheim this year is that they make the rookies carry around Settlers of Catan. They certainly play like hockey comes second.

Things perked up for a little while, but there’s no doubt this team is bound for the lottery.

The Sharks are the only team to lose all of their games over the past week, and all in regulation. I think they took the nickname of playing in the ‘Shark Tank’ a little too literally.