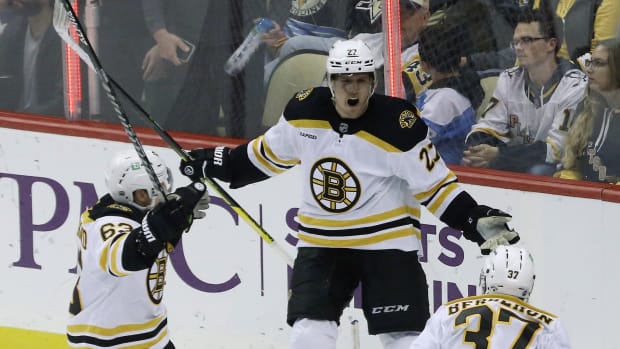 It’s been five weeks into the season and already we have a fourth different team in the top spot with the Bruins, thanks to a league-best 9-1-0 record and plus-19 goal differential. They’re thriving under Jim Montgomery even though they still aren’t playing with a healthy roster, and they never ranked higher than fourth last season.

The Flames and Avalanche both drop out of the top five with their losing streaks, while the Devils and Sabres enter the top 10 for the first time this season. It’s a huge turnaround from when they finished 27th and 19th, respectively, in last year’s final rankings. Is it premature? Perhaps, but the Devils and Sabres have been consistently good, and the Devils have a strong case to push higher with their strong possession analytics. It’s been a meteoric rise after being ranked in the bottom third in the pre-season power rankings.

Other big movers include the Stars and Islanders moving into the top 16, while the Leafs, Penguins and Blues take huge tumbles with their recent struggles.

Jim Montgomery’s got the B’s on an incredible run, and their most impressive win came Tuesday against the Pens after losing Jeremy Swayman and Derek Forbort to injury and overcoming a three-goal deficit to win in overtime. Charlie McAvoy has even yet to play a game this season, but his return is imminent.

There’s always the odd stinker, but the Canes remain one of the league’s most consistent teams. They’ve allowed their opponents to score more than three goals just twice this season, both of which were losses.

A reminder that Logan Thompson was undrafted and spent a year playing Canadian university hockey and climbed up from the ECHL and that Adin Hill cost them a fourth-round pick. When the Knights aren’t so obsessed with going after big names, they tend to make good decisions. Chandler Stephenson was also a great pickup, and the “Misfits Line” has stayed intact since their inaugural season. This team is very balanced and well-coached, which was their recipe in 2018 as well.

A bit of a roller coaster with four straight losses and then three straight wins. Igor Shesterkin has been responsible for all six of their wins this season and has yet to lose in regulation. The only slight worry is their offense, which ranks 22nd with 2.91 goals per game, but when you have Shesterkin in net, that’s all you need most nights.

That’s now five straight wins with a Campbell/Skinner rotation but watch the games and sometimes you wonder if the team playing in front of them is even the same. Neither has managed to win two games in a row, which is slightly concerning.

They played just two games since last week, but it was bad enough to drop them from the top spot. They lost to their hated rival blowing a one-goal lead twice, and then blew a two-goal lead against the Kraken, whom they swept last season.

Well, it only took almost 30 years since the trapping teams in the mid-’90s for the Devils to finally play an exciting brand of hockey. Flush with talent and speed at basically every position, the Devils are outshooting their opponents by an average of nearly 18 shots per game. They’re not just blindly throwing pucks on net, either; their 131 high-danger shot attempts at 5-on-5 rank second in the league behind only Vegas (138). Credit to them for taking advantage of a very soft early-season schedule.

Slow to get going and have missed Gabriel Landeskog all season. The good news is Alexandar Georgiev seems to be a reliable starter, and note four of their five losses have been by just one goal and they’ve played only three games at home. It’s been a weird schedule with three back-to-backs already, and they’ll play just two games over the next eight days, making it difficult to find their rhythm, but as defending champions, they do deserve some benefit of the doubt.

They’ve won five of their past six, which is what happens when you give Steven Stamkos and their power play a league-high 27 opportunities during that span. Note their wins have been nail biters with three wins decided by one goal and another one decided by two goals but with one empty netter. The Lightning’s current 3.10 GA/GP represents a 10-year high.

The Sabres’ long-term bets so far in Tage Thompson and Mattias Samuelsson have looked pretty good, and they’ll have Rasmus Dahlin for another season at a bargain for $6 million cap hit. At 4.11 GF/GP, it’s their highest-scoring squad since they won at least 50 games in back-to-back seasons in the first two years of the cap era.

A big sigh of relief with Scott Wedgewood earning his first win of the season in Jake Oettinger’s absence. The latter has been the best goalie in the league and the Stars will be hard-pressed to win without him, and it’s a difficult stretch coming up with six of their next seven games on the road.

Spencer Knight started… two consecutive games?! It must be the heat, or the craze over their new reverse retros to affect this revolutionary thinking. Alas, Knight couldn’t win his second straight despite being an easy matchup against the Coyotes.

Their plus-11 goal differential really stands out because they were minus-6 last season, and three of the wins during their four-game streak were against the Rangers, Canes and Avs. Lane Lambert has them playing a freer offensive style, but they can be a very inconsistent bunch.

It’s remarkable the Caps are over .500 despite missing TJ Oshie, Tom Wilson and John Carlson, and may not have Nicklas Backstrom, Carl Hagelin and Connor Brown all season. Only one regular (Evgeny Kuznetsov) has yet to score a goal and the Darcy Kuemper-Charlie Lindgren tandem is giving them a chance every night.

Tuesday’s loss against the Bruins stung because it was their fifth straight and their second straight since Jake Guentzel returned to the lineup. This is a problem because if a healthy Pens lineup can’t win games consistently, there’s zero chance their injury-prone lineup will hold up in the long run.

Cal Petersen and Jonathan Quick are more paupers than kings, rated as one of the worst tandems in the league ranking 57th and 62nd, respectively, out of 67 in total goals saved above average at 5-on-5. A reminder the Kings are paying $10.8 million cap hits for this tandem, the second-highest cost in the league, second only to the Panthers.

The Leafs struggled last October as well, going 4-4-1 with a minus-8 goal differential. But the panic does seem a little more real this time because an unspoken ultimatum had been laid down for GM Kyle Dubas and Brendan Shanahan. The Leafs went 12-2-0 last November, including 6-0-0 on the road.

Marc-Andre Fleury has been better, but his overall numbers are still ugly and his last four opponents were Chicago, Ottawa and Montreal (twice). On another note, though Joel Eriksson Ek is the de facto No. 1 center, I’m glad to see that the Minnesota tradition of miscasting No. 1 centers is alive and well with Freddie Gaudreau after the Victor Rask debacle.

I caught flak for ranking the Sens at 16 last week, but ho-hum they’ve lost three in a row since. They’re back at the bottom of the Atlantic – an admittedly tough division – but no threats of relocation and the rink are more than half full, so that’s new.

It has not been an easy schedule and they’ve faced only one team (Arizona) that has no playoff or Cup aspirations. Connor Hellebuyck’s play has improved, but note that the Jets still bleed shots and he might end up leading the league in saves for the fifth straight season.

Three straight wins then five straight losses? Tough to figure out who the Blues really are being so streaky. Jordan Kyrou, Ryan O’Reilly and Torey Krug have the league’s three worst plus-minus with a combined minus-34 (!) entering Tuesday’s games, and note that since their Cup title in 2019, their underlying possession metrics have been in the bottom third ever since.

Carter Hart continues to be great, which is good, but it also looks like this team has hit a bit of a wall after the initial John Tortorella bump. They’ve lost three of their past four with only seven goals scored.

It was a promising start, but their goaltending woes are starting to pop up again; neither Ville Husso nor Alex Nedeljkovic have managed to win consecutive games. They’ve lost five of their past seven with 28 goals allowed in the losses and their defense doesn’t look like it has improved very much.

It’s easy to see why Luke Richardson was so highly regarded as a potential head coach. The Hawks are streaky but surprisingly competitive, and it’s pretty amazing the turnaround in Max Domi’s play; he’s an early candidate for comeback player of the year after signing a one-year, show-me contract.

Their offense is much better but, uh, their goalies still stink like a bad day at the Pike Place Market. Fun fact: no goalie in Kraken history has a save percentage higher than .900. Chris Driedger comes closest at .899 and Joey Daccord is the worst at .861.

They’re as fun as they are unpredictable, looking like giant killers one night and a lottery team in others. At the very least, Martin St. Louis is worth the price of admission because he’s not afraid to do things differently, including playing six forwards at once or scratching $15 million worth of forwards in Jonathan Drouin, Evgenii Dadonov and Mike Hoffman. Does Quebec get equalization payments for those?

If you can’t average 15,000 fans per game, why not just spread it out over three games? Unlike the franchise itself – a hockey team in the desert – Mullett Arena is actually a fun gimmick? On the ice, the team’s gotten into a groove with two losses for every win, which puts them on pace for 27 wins. Progress!

Miller’s $56-million contract doesn’t kick in until next season, but they’ve already moved him to the left wing and the fanbase is already ready to fire him into the sun. Acquiring Jack Studnicka and Ethan Bear feels like a precursor to a bigger move to come if they don’t turn it around.

One of the most disappointing teams and losers in seven of their past eight. That big regression from Filip Forsberg and Matt Duchene? It’s happening right before our eyes, going from a combined 18.7 shooting percentage last season to 8.8 percent this season. No biggie, they’re just paying them $16.5 million for the next four seasons.

So generous of the Ducks to provide free additional entertainment with their wins because none of them have come in regulation, and Jakob Silfverberg was even kind enough to provide additional drama scoring the game-tying goal into his own net in last night’s game against the Sharks. Parity is alive and well in the NHL.

Those dreaded 7:30 p.m. local time starts for the Sharks aside, Erik Karlsson has been really fun to watch this season. He scored his first career hat trick against the Ducks and has been one of the lone bright spots for a franchise that’s likely headed toward a long, painful rebuild.

When Johnny Gaudreau said he hated the cannon, we didn’t think he was serious about not ever scoring again. If going 0-for-25 on the power play wasn’t embarrassing enough, note it’s also the second-fewest opportunities in the league.