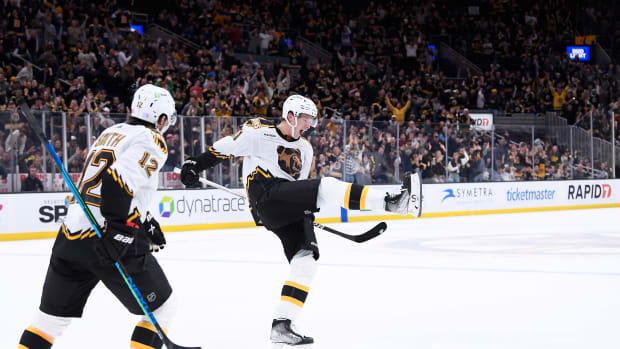 It’ll be American Thanksgiving in a little over two weeks, and it’s a key date in hockey because if you’re in playoff position by that time, your odds of making the cut are roughly 75 percent. Last season, only three teams – Ducks, Jets and Golden Knights – in the top 16 of the American Thanksgiving edition of the Power Rankings missed the playoffs, so even the playoff odds rang pretty true in this column.

With a perfect home record and the best goal differential in the league at plus-23, the Bruins retain top spot for the second straight week, becoming just the second team to do so after the Avalanche this season. However, the Knights and Devils are hot on their heels; the Devils move into the top five for the first time this season following a perfect 3-0-0 week, and could even be the top team next week with a soft schedule coming up facing the Sens, Coyotes and Habs.

Given the losing streaks some teams are going through, the Oilers, Rangers and Flames all tumble out of the top 10, with the Penguins, Senators and Blues fall further into the bottom third. Meanwhile, the Isles, Leafs, Jets, Flyers, Wings and Kraken all move way up.

This week’s Power Rankings features some of the biggest surprises and disappointments from each team.

Biggest surprise… pick one. Whether it’s Hampus Lindholm’s point-per-game pace, David Krejci’s triumphant return or Nick Foligno’s resurgence, the Bruins have been excellent because everyone’s been pulling their weight and they remain unbeaten on home ice.

The tandem of Logan Thompson and Adin Hill has been far better than expected, and it was supposed to be the weakest part of their lineup. According to naturalstattrick.com, Thompson and Hill have saved a combined 5.38 goals above average at 5-on-5. Last season with Thompson, Laurent Brossoit and Robin Lehner, they were a combined -1.47.

Everything about this team has been a pleasant surprise, but the most staggering stat is their puck possession metrics. They’re outshooting their opponents by an average of 13 (!) shots per game and have dominated puck possession in both Corsi and expected goals.

Martin Necas deserves a ton of credit – he’s taken a huge step. Will his production slow down at some point? Probably, considering his individual 5-on-5 CF% is at 62.43 percent and his IPP – individual points percentage, which indicates whether or not Necas had a direct hand in a scoring play while he was on the ice – remains at 100 percent.

The Avs have withstood a bad schedule with four back-to-backs already, including the most recent one in Finland, and also injuries to key players. Their depth has been surprisingly good, but it’s going to get further tested with Valeri Nichushkin’s injury, putting pressure on Martin Kaut and Alex Newhook to take on more responsibility.

The Isles are on an absolute tear, and the only loss in their past eight games was a Saturday matinee in Detroit. What’s most surprising is that their offensive numbers seem quite sustainable, which means Lane Lambert’s adjustments are working.

Their current goaltending situation isn’t all that surprising, so let’s turn to Nick Robertson, who’s playing bottom-six minutes and drawing in and out of the lineup but really shouldn’t. They need scoring help, and Robertson’s their best candidate to do so. Michael Bunting and Alex Kerfoot have combined for three goals this season.

It’s a really mixed bag for the Jets despite their solid record. On one hand, missing the playoffs was a blessing in disguise because it gave Connor Hellebuyck more rest over the summer, and he’s been excellent this season, but their offense has sputtered with Kyle Connor scoring just two goals in 12 games.

The most surprising development has been the Stars’ scoring depth with Jamie Benn and Tyler Seguin combining for 21 points, and their prospects are starting to trickle in with Ty Dellandrea and Wyatt Johnston.

It’s the same story in Edmonton every year – the supporting cast just isn’t good enough, and it’s going to be even harder after Evander Kane suffered a wrist injury after he was cut by a skate Tuesday night. Evan Bouchard doesn’t play much under Jay Woodcroft and has just five assists with a minus-5 rating, and Kailer Yamamoto and Dylan Holloway have a combined zero goals in 23 games.

Depth scoring was a big disappointment to start the season, but that has since rectified itself. The thing about winning two Cups is that it buys you a lot of the benefit of the doubt, so there’s no panic with Andrei Vasilevskiy, but the defense in front of him needs to improve.

The Rangers have a reputation for being really bad at developing young forwards, and part of that is Gerard Gallant’s preference for veterans, but after a promising start, both Alexis Lafreniere and Kaapo Kakko have been underwhelming with 11 points combined. The playoffs sowed the seeds for a potential breakout season, but it looks like the hype was still premature.

Moritz Seider may be disappointing from a point production and fantasy perspective, but Filip Zadina is on the verge of being labelled a bust. He’s out for at least a month with a lower-body injury, but the 22-year-old has scored just 25 goals in 169 games with a career 7.3 shooting percentage – not what you’d expect from a scorer.

What’s surprising is how the Kraken are handling Shane Wright. While they have a few options, they are also wasting valuable development time, and it’s unclear if the Kraken’s goal is to make the playoffs or continue to draft and build out a young core and prospect pipeline.

Aleksander Barkov, Anton Lundell and Sam Bennett have a combined 4.1 shooting percentage, and when your top three centers are slumping, it’s really hard to win games. The law of averages says that they’ll snap out of their funk sooner than later, but American Thanksgiving is quickly approaching.

A promising start has faded from memory with six straight losses, and most disappointing has been the performance of their top players. Jonathan Huberdeau and Andrew Mangiapange have combined for three goals and 10 points.

Rasmus Dahlin was expected to be good, but he’s vaulted into the elite tier with 16 points in 12 games. We all know Owen Power, but a healthy Mattias Samuelsson and the continuing development of Jacob Bryson also bodes really well for their blueline.

Admittedly, I did not think Darcy Kuemper would be so good, and it’s a testament to the Caps’ depth and coaching that they’re still in the thick of things despite missing so many key players. Dylan Strome is looking like one of the best bargain signings with 12 points in 14 games.

Goaltending has been the biggest disappointment, and it wasn’t supposed to be this bad. Cal Petersen and Jonathan Quick have been one of the weakest tandems in the league.

The Wild’s roster is in flux because of their cap penalties, a defensive corps that has no clear leader and a smattering of young forwards who have yet to figure out their role in the NHL and often playing higher in the lineup than they should. However, Calen Addison has been a bright spot with seven points in 11 games to lead their blueline.

The Habs have been fun to watch this season, but Kirby Dach stands out the most. Playing on the right wing opposite Cole Caufield, Dach is thriving in an offensive role with 10 points in 13 games. At the time, it felt like a high price to pay for Dach, but GM Kent Hughes’ instincts proved right when he thought there was still plenty of time to develop and help him reach his potential.

At what point do the Coyotes give up on Barrett Hayton? The 22-year-old is still in the very early stages of his career, but he has just two assists in 12 games, and for a center touted for his two-way game, his underlying metrics aren’t very good. He was a top pick in the John Chayka era and the Coyotes are replenishing their prospect pool very quickly, meaning there’s a chance Hayton gets squeezed out.

Mike Sullivan is desperately shuffling his lines to stop the Pens’ seven-game skid, but what can you do when you lack quality depth? Kasperi Kapanen has been one of their most disappointing acquisitions in recent years, and watching John Marino excel with the Devils must hurt.

Bo Horvat is on pace for 75 goals, and it’s important because the Canucks are cap-strapped and may not have enough space to extend their captain, who will be a UFA this season. This team is at major crossroads, and they won’t be able to push up the rankings if they’re getting pulled in different directions.

A lot of things needed to go right for Roman Josi to replicate last season’s performance, but even by most standards, his production has been mediocre with seven points and a minus-9 rating in 12 games. The Preds sneak into the playoffs every season, but the music looks like it’s going to stop this season.

At this rate, the Blackhawks are going to get a really good haul for Max Domi. Either that, or Domi will get a nice extension so they have some resemblance of a hockey team next season when, presumably, both Jonathan Toews and Patrick Kane will be playing elsewhere.

Putting up the Sens for sale was not a surprise, but Ryan Reynolds emerging as a prospective buyer certainly is. If Reynolds’ bid is successful and Pierre Dorion remains at the helm, it could be the most contrasting and funniest combo since Arnold Schwarzenegger and Tom Arnold in True Lies.

Ryan O’Reilly has only two points in 11 games, a minus-12 rating and he’s been struggling to win half his faceoffs, an aspect of the game he usually dominates. While he’s never been a top-tier offensive player, O’Reilly’s sudden drop in performance is a little alarming because he’s supposed to be the even-keeled veteran whom coaches can rely on.

He’s played just eight games and currently injured, but Jamie Drysdale didn’t show a lot in his brief stint with zero points, eight shots and a minus-3 rating. The Ducks had envisioned him as a big part of their future core, but the presence of Kevin Shattenkirk and the addition of John Klingberg made it tough to get minutes.

The Sharks might have the comeback player of the year on their hands in Erik Karlsson, who is averaging 25 minutes per game and has scored 19 points in 14 games, 13 of which have come at even strength.

The biggest surprise has been how uncompetitive the Jackets have been, and they’ve always managed to punch above their weight. They’re 2-for-33 on the power play when many believed Johnny Gaudreau and Patrik Laine could give them a huge lift.