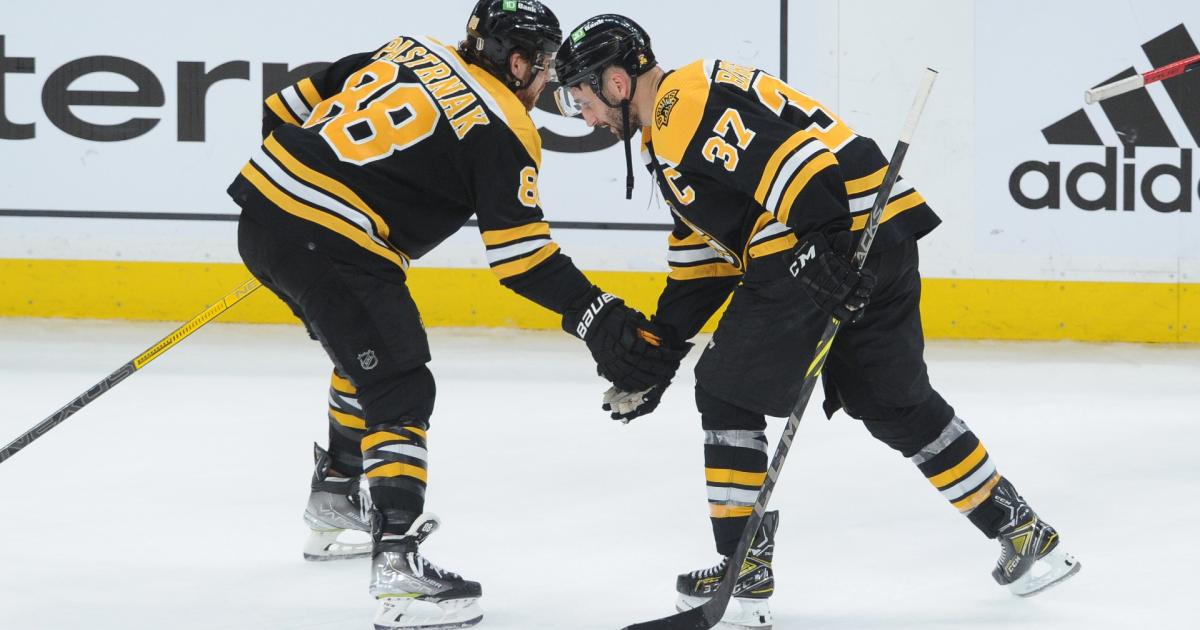 As the NHL season approaches the All-Star break and soon the trade deadline, we are starting to very faintly get a picture of what the postseason is going to look like.

It’s getting to be decision-making time soon for front offices. Are they sellers, buyers, a bit of both or neither? Luckily for general managers, there is still a month to be played before the NHL trade deadline.

Teams like the Bruins, Hurricanes and Devils are maintaining their position atop the standings by consistently getting wins. The Oilers, Islanders and Penguins are examples of clubs yo-yo-ing up and down the rankings, and then there are the bottom feeders who have their eyes on their own, different prize — Connor Bedard.

The Avalanche and Capitals are continuing to get key pieces back from the injured list. Meanwhile, the Canadiens and Senators both recently took blows to their respective forward group.

The Sporting News gives its most recent NHL power rankings as we pass the halfway point in the season.

Boston has been at the top of the standings for the entire season, currently sitting with more than 10 points of space between them and the second-place Hurricanes. The Bruins are on pace to break the NHL’s single-season win record of 62 and point record of 131. Something special is brewing in Beantown.

The only teams in the league that have not hit double digits in regulation losses yet — are the Bruins and the Hurricanes. Carolina is about as well-oiled of a machine as you will find in today’s NHL. Adding Max Pacioretty to that lineup gave them a bonafide sniper, but he re-tore the same Achilles that kept him out for half of this season. We’ll see how that changes GM Don Waddell’s trade deadline.

The Devils refuse to go away. Just when people began to doubt their dominance, New Jersey ripped off five wins in a row and has won six out of their last seven. The Devils are legit and have a chance at potentially winning the Metro Division, which they have never done since the division re-alignment in 2013.

Like them or not, the Maple Leafs are a dang good team this year. The duo of Ilya Samsonov and Matt Murray have held down the fort in net and the star forwards have been producing. Like every year, the question with Toronto will be how the regular-season success translates into the playoffs.

Ho hum, just another season of success in Tampa Bay. Losing Ryan McDonagh and Ondrej Palat has proved to be a non-issue for the Lightning — so far. Steven Stamkos continues to turn back the clock and Nikita Kucherov is very quietly on pace to hit 100 points again.

The Rick Bowness effect has been real in Winnipeg. Connor Hellebuyck is a Vezina candidate with his stellar play in net, Josh Morrissey has emerged as a favorite for the Norris and Pierre-Luc Dubois finally seems to be clicking in Winnipeg.

While the Stars aren’t an overly deep team, they are no longer solely relying on their first line to win them games. Jake Oettinger has flourished into a borderline elite goaltender and Jason Robertson continues to rise to stardom. Dallas is another team that has benefited heavily from a coaching change, with Peter Deboer succeeding in his first season down in Texas.

Speaking of coaching changes, the Golden Knights are another team to see immediate improvement under a new bench boss. While tons of credit should go to Bruce Cassidy, the team hasn’t dealt with nearly as many injuries and Logan Thompson has given the team an answer in net.

The Rangers’ formula from last year has been evident again this year. The team has relied heavily on Igor Shesterkin and the power play to generate wins. The 5-on-5 play is still concerning, but New York is finding ways to win.

The Kraken have been a pleasant surprise this year. Yes, they are in a weak Pacific Division, but they are legit. Seattle is the only team to beat Boston at home in regulation. The goaltending is a problem, as Philipp Grubauer has lost the starting job to Martin Jones, who is winning games despite sub-par stats.

Pheonix Copley has been the Kings’ savior this season. With Jonathan Quick and Cal Petersen both struggling immensely, Copley has swooped in and gone 13-3-0 after taking over the crease. The Kings’ defense is still an issue, but Copley has stopped the bleeding for now.

The Capitals haven’t played with a fully healthy roster at any point this season. The constant lineup changes haven’t helped, as the team has been in and out of a groove. Yet, they have been able to stick around in a deep Metro Division.

The Oilers are starting to find a groove as of late. The defense has improved recently and the team is riding a six-game winning streak. With Connor McDavid and Leon Draisaitl, Edmonton can be good, but with better goaltending and defensive play, this team could be dangerous again.

Minnesota has rebounded from a tough start but is still playing catch-up to the Jets and Stars in the division. While Marc-Andre Fleury has been fine as the starter, backup Filip Gustavsson is putting up incredible numbers this year. It hasn’t happened yet, but Gustavsson could get more starts down the road.

The Avalanche are finally getting somewhat healthy and are getting more wins as a result. Colorado is on a five-game winning streak, but still outside of a playoff spot. However, all this team needs to do is make the dance, because a fully healthy Avalanche squad is one of the best in the league.

What in the world is going on in Pittsburgh this year? As soon as it looks like the Penguins have turned a corner, they drop a bunch of games. And it’s not just that the Pens are losing, they are blowing leads left and right. The Pens are in the thick of the playoff race but have not been impressive.

While MacKenzie Weegar has been excellent on Calgary’s back end, Jonathan Huberdeau has not found his fit yet with the team. In addition, Jacob Markstrom has regressed from his Vezina-contending season last year and the Flames no longer look like the contenders they were expected to be.

There’s no denying that the 2022-23 season has not gone as planned for the Panthers. But Florida has started to figure things out as of late, going 7-2-1 in its last 10 games. The lack of depth all around is still concerning, so it will be interesting to see how GM Bill Zito handles the upcoming trade deadline.

The Islanders’ playoff hopes are slipping fast. New York has lost four in a row and is 2-5-3 in its last 10 games. Playing in a very competitive Metro Division does not help, and it looks like the Isles will be the odd team out of the playoffs.

The Sabres are FUN! That does not mean they are necessarily really good, but every game with Buffalo competing in it is bound to be entertaining. The offense scores at the same rate as the Bruins do, while the defense allows nearly just as many goals. It’s fun, let’s enjoy it and maybe the Sabres make a push for a wild-card spot.

Try as he might, Juuse Saros can only do so much for Nashville. The Predators’ offense remains an issue, ranking as one of the lowest-producing units in the league. Something will have to click soon for the Preds to get into the postseason.

The Blues have been one of the most disappointing teams this year and things have not gotten easier with the injuries to Vladimir Tarasenko and Ryan O’Reilly. St. Louis is shaping up to be a seller at the deadline, which will only push them down further if guys like Tarasenko and O’Reilly are moved.

Detroit has been asking a ton of Ville Husso as of late, with Alex Nedeljkovic not providing adequate enough results in his role as the backup goalie. The Red Wings are still in the hunt, but it’s looking more like the beginning of the year was an anomaly.

The Flyers are slowly starting to enter into no man’s land in the standings. They’re not good enough to make the playoffs, yet they haven’t been bad enough to keep them at the bottom of the league. If the team continues this up-and-down trend, the Flyers are going to find themselves out of the postseason and out of a top-five draft pick.

The playoffs don’t look likely for Ottawa, who have not had the high-flying offense some expected when they got Alex DeBrincat and Claude Giroux in the offseason. To make matters worse, Josh Norris came back early from his shoulder injury, played in three games and then was shut down for the year.

What’s a surefire way to put yourself in the Connor Bedard sweepstakes? Lose your leading goal scorer for the year. The Canadiens are only going to go down from here after it was announced that Cole Caufield would miss the rest of the season with a shoulder injury.

The Canucks’ front office did Bruce Boudreau dirty by dragging out his time in Vancouver when it was known he was going to be replaced. Now Rick Tocchet is at the helm, but is he really the guy to turn things around? If it does happen, it won’t be this year.

MORE: Why did the Canucks fire Bruce Boudreau?

It’s been a rough season in San Jose. The Sharks had one three-game win streak back in November. That may have been the peak of their season.

The Blackhawks are starting to do that thing that they don’t want to do — win games. Chicago has won six out of their last eight and have come crawling out of the bottom of the standings. If Patrick Kane and Jonathan Toews get moved, Chicago will likely creep right back to where they started.

After starting off the new year with an eight-game losing streak, the Coyotes finally got their first wins of 2023 last week. With two matchups against the Ducks coming up this week, it’s a true test to see who is in more on the Bedard tanking.

The Ducks would have been in the last spot, however, they just beat the Blue Jackets last week, marking only the fifth time they have won a game in regulation this year. Do you know how hard it is to only win five games in regulation when you’ve played in 47 games?

The Blue Jackets have the worst record in the league and let the Ducks beat them at home in regulation. Yeah, that will put you last in the power rankings.