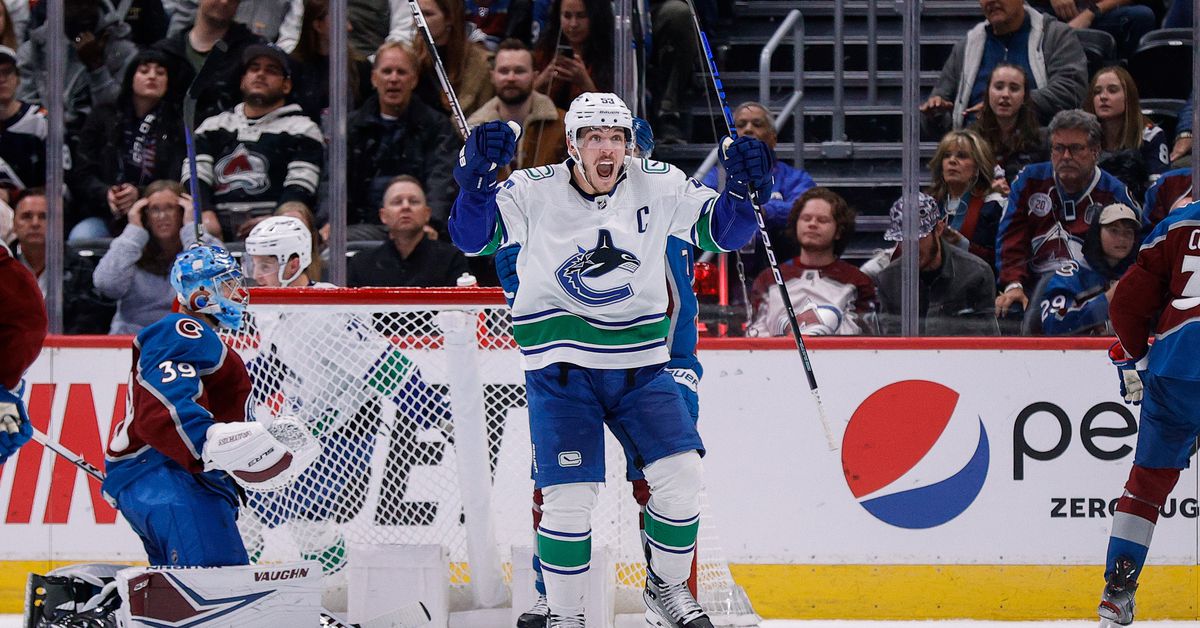 Just when it looked like head coach Bruce Boudreau would finally be put out of his misery, the team turned things around again … well, kind of. Vancouver rallied back again, pulling off a 5-4 win over the Buffalo Sabres on Nov. 15 and a 4-1 win over the Los Angeles Kings on Nov. 18.

Things looked like they were back on track, until they weren’t.

Vancouver seemed to have the game in hand on Monday, when the team scored three goals in the first seven minutes of the third period to take a 4-2 lead over the Vegas Golden Knights. All the Canucks had to do was lock things down and it would be three wins in a row. However, Vancouver imploded much as it has throughout this season. The team allowed Vegas to score three goals in response and Vancouver lost 5-4 in regulation.

While the 4-3 win over the defending Stanley Cup champions, the Colorado Avalanche, on Wednesday feels like a confidence-building victory, it’s clear this Canucks team is lacking something.

Sportsnet explored the idea after the loss to Vegas with the headline “After Another Blown Lead, Canucks’ Problem Isn’t Scoring Goals – It’s Winning.” That’s a tough problem to have because no matter how talented you are, if your team doesn’t have that unexplainable “it,” you’re destined to fail.

By trading wins and losses while trying to figure things out, sadly for Canucks fans, the team is in No Man’s Land. Vancouver is not good enough to win it all and yet, still too good to fail. Boudreau continues to do his job of trying to find a way to win, while management appears ready to blow things up because the core might be rotten.

The trade rumors are swirling. Earlier this week, the talk around Tyler Meyers seemed to heat up. Several people reported that there was almost a deal to send Meyers to the Ottawa Senators in exchange for Nikita Zaitsev. Both players have modified no movement clauses and one or both of them reportedly nixed that idea.

Talks about Bo Horvat possibly headed to Colorado are also swirling. The Avalanche made a small trade on Wednesday, leading to more speculation, but right now, it looks like it’s all talk.

The rumor is that except for two or three key players, any and all of the Canucks are on the table for trade talks. It makes sense — the theory is, if you’re in a playoff position by American Thanksgiving (yesterday), then you have a more than 70 percent chance of making the playoffs when it really counts. The Canucks are out — and so are most of the other Pacific Division teams.

The Ducks are so far out of the playoff race that the team is vying for Connor Bedard instead. Anaheim sits eighth in the Pacific Division and this week was a true reflection of the entire season so far.

Anaheim lost a pair of games against the St. Louis Blues — 6-2 on Nov. 19 and 3-1 on Nov. 21 — but then returned to Southern California to beat the New York Rangers 3-2 on Wednesday. It was the Ducks’ first regulation win all season. All season.

Goaltender John Gibson stood on his head for the win. He stopped 41 shots, including a 17-shot barrage in the third period. It was a rare display for Gibson, who has been only human this season. He’s sporting a 4.00 goals against average and a .895 save percentage, much lower than where he was at this time last season when he was pretty much carrying the Ducks on his back.

If the playoffs started today, the Flames would just barely make it in, taking up the first Wild Card spot. That’s right, a team that showed so much promise at the start of the season is now fourth in the Pacific Division.

The Flames had a good week to maintain the team’s spot in the rankings. Calgary beat the Florida Panthers 5-4 in a shootout on Nov. 19. Adam Ruzicka netted two goals for the Flames.

On Monday, the Flames beat the Philadelphia Flyers 5-2. Two of those goals were empty netters in the waning seconds of the third period. A short trip later, the team was in Pittsburgh to play the Penguins on Wednesday. The hard-fought goaltending duel featured 38 saves from Dan Vladar. Unfortunately, the Flames lost in the shootout, but managed to snag five of a possible six points this week.

Despite having the top two offensive scoring threats in the league, the Oilers would be out of the playoffs if the postseason were to start today. Edmonton sits at fifth in the Pacific Division and tenth in the Western Conference heading into American Thanksgiving.

The week started out well for the Oilers with a 4-3 overtime win against the Golden Knights on Nov. 19. The impressive win over the division leader was made possible by none other than Connor McDavid.

But then Edmonton hit the road and lost the next two. A visit to New Jersey led to the Oilers becoming another victim of the Devils’ win streak. Edmonton lost 5-2 on Monday.

On Wednesday, the Oilers ran into Ilya Sorokin and the New York Islanders. Sorokin stopped all 50 shots he faced to shutout McDavid, Leon Draisaitl and the Oilers. Final score was 3-0 in favor of the Islanders.

Despite being held off the scoreboard, McDavid still leads the league with 35 points. Draisaitl is a close second. He’s tied with the Dallas Stars’ Jason Robertson with 31 points.

Los Angeles looks likely to make the playoffs if the old Thanksgiving adage holds true, but this week did not do the Kings any favors.

LA lost all three of its games, starting with a 4-1 loss to the Canucks on Nov. 18, followed by a 3-2 overtime loss to the Seattle Kraken the next night. Then, the Kings hosted the Rangers on Tuesday and lost 5-3. Chris Kreider scored twice to fuel New York’s comeback win.

Bad news for the Kings: Cal Petersen, the presumed successor to Jonathan Quick in net, still has not proven he’s ready to take the reins. Petersen was in net for the losses to the Kraken and the Rangers, posting a .897 and .833 save percentage, respectively. Those are not great numbers if you’re supposed to be the starting goaltender of the future for a playoff-bound team.

Although he did make this impressive save against the Rangers:

The surprise of the season in the Pacific Division has to be the Kraken, who currently sit comfortably in second place in the division and are playing like a playoff contender.

Seattle won both games this week, first beating the Kings 3-2 in overtime. Jordan Eberle scored the game-winner in overtime by starting a two-on-one and then finished it off himself.

As outlined above, the Canucks are a strange study. There’s no need to rehash the chaos that is Vancouver, so, I’ll leave you with the third period game winner from Ethan Bear:

The Golden Knights continue to score in droves and maintain the team’s position at the top of the Pacific Division and second overall in the league behind the Bruins. Vegas lost to the Oilers 4-3 in overtime on Nov. 19, but then defeated the Canucks 5-4 on Monday and the Senators 4-1 on Wednesday.

Jack Eichel leads the team with 11 goals and 26 points, while netminder Logan Thompson is having a phenomenal rookie season with 2.30 goals against average and a .925 save percentage. Thompson is 11-3 this season.