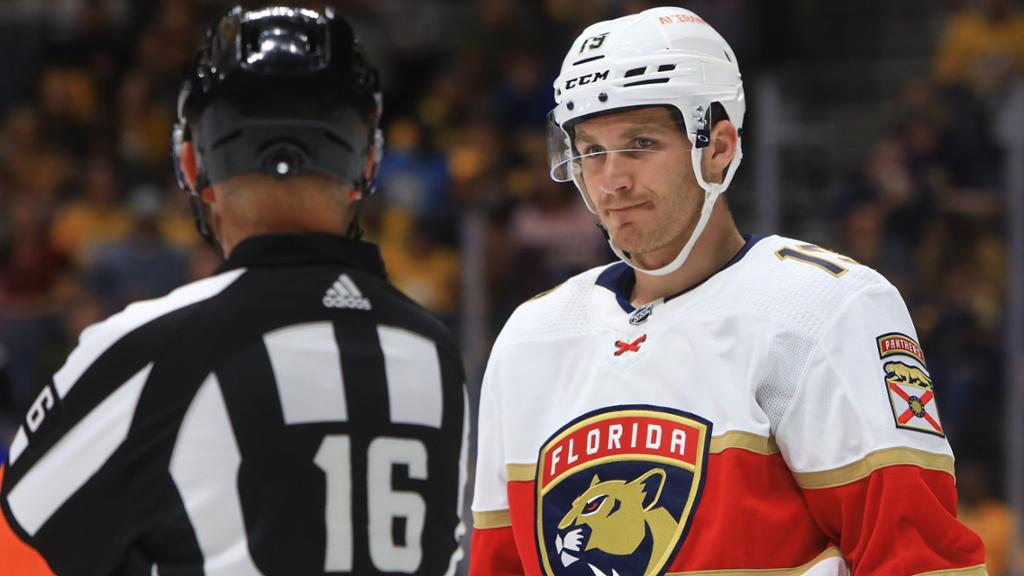 All eyes on Tkachuk debut

The Matthew Tkachuk era begins with the Florida Panthers when they open their season at the New York Islanders on Thursday (7:30 p.m. ET; MSGSN, BSFL, ESPN+, SN NOW). There’s going to be tremendous pressure on the Panthers, the Presidents’ Trophy winners last season who were swept by the Tampa Bay Lightning in the best-of-7 Eastern Conference Second Round. Can Florida improve? Will Tkachuk’s sandpaper presence and big-time scoring ability turn the Panthers into a serious Stanley Cup contender? After the trade that altered two teams — Tkachuk to Florida from the Calgary Flames for forward Jonathan Huberdeau and defenseman MacKenzie Weegar — it’s time to see what the forward, coming off a 104-point (42 goals, 62 assists) season, can bring to the Panthers. — Amalie Benjamin, staff writer

While Tkachuk debuts with the Panthers, the Flames begin their new era with Huberdeau, Weegar and center Nazem Kadri when they host the Colorado Avalanche at Scotiabank Saddledome (9:30 p.m. ET; SN1, ALT, ESPN+, SN NOW). Kadri, of course, helped the Avalanche win the Stanley Cup last season and left to sign a seven-year, $49 million contract with the Flames on Aug. 18. He joins Huberdeau, who signed an eight-year, $84 million contract, and Weegar, who signed an eight-year, $50 million deal, as part of Calgary’s long-term core. After finishing first in the Pacific Division last season, the Flames appear positioned to make a Cup run of their own. A win against the reigning champions would be a great way to start their season. — Tom Gulitti, staff writer

Battle of goalies in Music City

Goaltending will be the draw when the Nashville Predators host the Dallas Stars at Bridgestone Arena (8:30 p.m. ET; ESPN+, HULU, SN NOW). Juuse Saros of the Predators was a finalist for the Vezina Trophy, finishing third behind Igor Shesterkin of the New York Rangers and Jacob Markstrom of the Flames, after going 38-25-3 with a 2.64 goals-against average, .918 save percentage and four shutouts. Saros won his first game this season, making 30 saves in a 4-1 victory against the San Jose Sharks at the NHL Global Series in Prague last Friday. Jake Oettinger was 30-15-1 with a 2.53 GAA, .915 save percentage and one shutout for the Stars last season and opened some eyes in the Western Conference First Round of the Stanley Cup Playoffs with a 1.81 GAA and .954 save percentage in a seven-game loss to Calgary. Aside from the head-to-head goalie battle, which is worth the price of admission alone, the Stars and Predators are expected to battle tooth and nail in the Central Division throughout the season, so this an immediate measuring-stick game for each of them. — Shawn P. Roarke, senior director of editorial

Sidney Crosby, Evgeni Malkin and Kris Letang begin their 17th season as Penguins teammates, extending the NHL record for the longest run with one team by three players. The Coyotes open with a six-game road trip before playing their first game at Mullett Arena in Tempe, Arizona, on Oct. 28.

Forwards Claude Giroux, who signed a three-year contract, and Alex DeBrincat, acquired in a trade with the Chicago Blackhawks, will debut for the Senators, who have their sights set on qualifying for the playoffs for the first time since 2017. After playing his first eight NHL games at the end of last season, 19-year-old defenseman Owen Power, the No. 1 pick in the 2021 NHL Draft, begins his first full season with the Sabres.

In addition to Tkachuk’s Panthers debut, this will be Lane Lambert’s first game as coach of the Islanders after replacing Barry Trotz. New York opens this season at home after playing its first 13 games on the road last season while construction of UBS Arena was completed.

Goalie Ilya Samsonov‘s debut for Toronto, which signed him to a one-year contract July 13, coincidentally comes against Washington, which decided not to make him a qualifying offer as a restricted free agent after last season. The Maple Leafs play their home opener after starting their season with a 4-3 loss at Montreal Canadiens on Wednesday. The Capitals also lost their opener, 5-2 at home to the Bruins on Wednesday.

Wild goalie Marc-Andre Fleury begins his 19th season needing 32 wins to pass Patrick Roy (551) for second in NHL history. The Rangers look to build on their 3-1 home win against the Lightning in their season opener Tuesday.

The Stars play their first game under coach Peter DeBoer, who replaced Rick Bowness (now coach of the Winnipeg Jets). The Predators play their home opener after winning back-to-back games against the Sharks at the NHL Global Series. Nashville’s David Poile is one win from becoming the fifth general manager to reach 900 with one team and nine from being the first in NHL history to reach 1,500.

The Avalanche have a quick turnaround after raising their Stanley Cup banner and opening with a 5-2 win against the Blackhawks on Wednesday. The Flames will look to win their season opener for the first time since 2009-10 (0-10-2). Kadri will be the first Stanley Cup winner to debut with a new team against the team he won the championship with since Carolina Hurricanes forward Cory Stillman against the Lightning on Oct. 5, 2005.

The Golden Knights play their home opener after beginning with a 4-3 victory at the Los Angeles Kings on Tuesday. The Blackhawks continue a season-opening three-game road trip.

The Kraken (5-4 overtime loss at the Anaheim Ducks on Wednesday) and Kings will each try to rebound from defeats in their season openers. Los Angeles defenseman Drew Doughty, forward Anze Kopitar and goalie Jonathan Quick started their 15th season playing together.