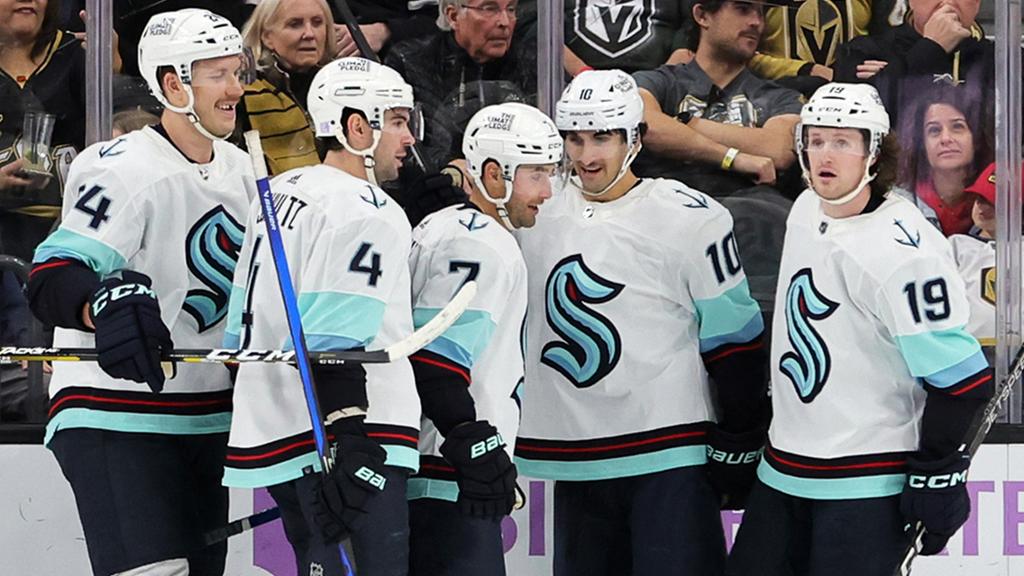 Welcome to the NHL On Tap. Three NHL.com writers will share what they are most looking forward to on the schedule each day. Today, their choices from five games Sunday.

The Seattle Kraken are 20 games into their season, have won four straight and have taken 17 points in their past 10 games. At 12-5-3, they sit in second place in the Pacific Division, a place few imagined after their difficult inaugural NHL season. There are many reasons for the Kraken’s success, including the point-per-game offense of new acquisition Andre Burakovsky; the forward leads Seattle in scoring with 20 points (seven goals, 13 assists). But rookie center Matty Beniers is the player to watch with the Kraken visiting the Anaheim Ducks at Honda Center (8 p.m. ET; BSSC, ROOT-NW, ESPN+, SN NOW). The 20-year-old has 15 points (six goals, nine assists) in 20 games, third on the Kraken in scoring and tops among NHL rookies. It will be interesting to see if he can out-do Trevor Zegras, the uber-talented 21-year-old center for the Ducks (6-14-1), who had 23 goals as a rookie last season and has 17 points (eight goals, nine assists) in 21 games this season — Shawn P. Roarke, senior director of editorial

The Minnesota Wild have been up and down this season, but Kirill Kaprizov has been steadily producing again. The 25-year-old forward is on an eight-game point streak (11 points; four goals, seven assists), tying an NHL career high he set and tied last season. He’ll try to set a new League career mark when the Wild (9-9-2) host the Arizona Coyotes (7-9-3) at Xcel Energy Center (2 p.m. ET; NHLN, BSWI, BSNX, BSAZX, SN NOW). Kaprizov, who won the Calder Trophy as the NHL’s top rookie in 2020-21, leads the Wild in goals (12) and points (24). He also leads Minnesota on the power play in goals (seven) and points (12). If the Wild want to climb higher in the Central Division they’ll need more consistency, but Kaprizov has certainly been doing his part. — Tracey Myers, staff writer

Just when you think the Winnipeg Jets might start to slide, they turn on the, well, jets. But Winnipeg continues to find ways to get wins, even if it isn’t always pretty. The Jets look to stay on their flight path against the Chicago Blackhawks at United Center (7 p.m. ET; NHLN, NBCSCH, TSN3, SN NOW) and are 4-2-0 in their past six games and 6-0-1 in overtime this season. They lost 6-1 at the Wild on Wednesday following a 4-3 overtime win against the Carolina Hurricanes on Tuesday, in a game where they let a 3-0 lead slip away in the final five minutes of regulation. But defenseman Josh Morrissey‘s goal won it for them. Winnipeg followed a similar script in a 5-4 win at the Dallas Stars on Friday, when Stars forward Jason Robertson scored twice in the final 2:12 of regulation to send the game into overtime. But Morrissey scored the game-winner again. The Blackhawks (6-10-4) have lost six in a row (0-5-1). — Dan Rosen, senior writer

The Blackhawks (6-10-4) have not won since a 3-2 victory at the Ducks on Nov. 12. Four of Winnipeg’s seven wins in November have been in overtime. Forward Blake Wheeler became the Jets/Atlanta Thrashers all-time leader in games played (844) Friday, passing Bryan Little (843). Winnipeg (12-6-1) is 6-2-0 against Central Division opponents this season.

The Ducks (6-14-1), 1-4-0 in their past five games and 2-7-0 in their past nine, are coming off a 5-1 loss to the Ottawa Senators on Friday and their power play is 0-for-11 in their past three games. Zegras has one goal in his past 10 games. The Kraken (12-5-3) aim for their fifth consecutive road win. Forward Jordan Eberle has eight points (five goals, three assists) in his past seven games.

The Canucks (8-10-3) have won two straight and four of five, scoring at least four goals in each of those victories, including a 5-1 win at the Vegas Golden Knights on Saturday, when their power play was 3-for-5 and center Bo Horvat scored his team-leading 17th goal. Horvat has scored a goals in three straight games. Center J.T. Miller had a goal and two assists against the Golden Knights, and has nine points (four goals, five assists) in a seven-game point streak. The Sharks are 1-4-0 in their past five games, allowing 22 goals in those four defeats, including at least five goals in three of them.

Each team is coming off a win Friday that ended a three-game losing streak. The Kings (12-9-2) won 5-2 at the San Jose Sharks, and the Senators (7-12-1) won 5-1 at the Anaheim Ducks. Ottawa forward Brady Tkachuk scored against Anaheim and needs two goals to reach 100 in the NHL. He has 98 goals in 297 games, including eight in 20 games this season.