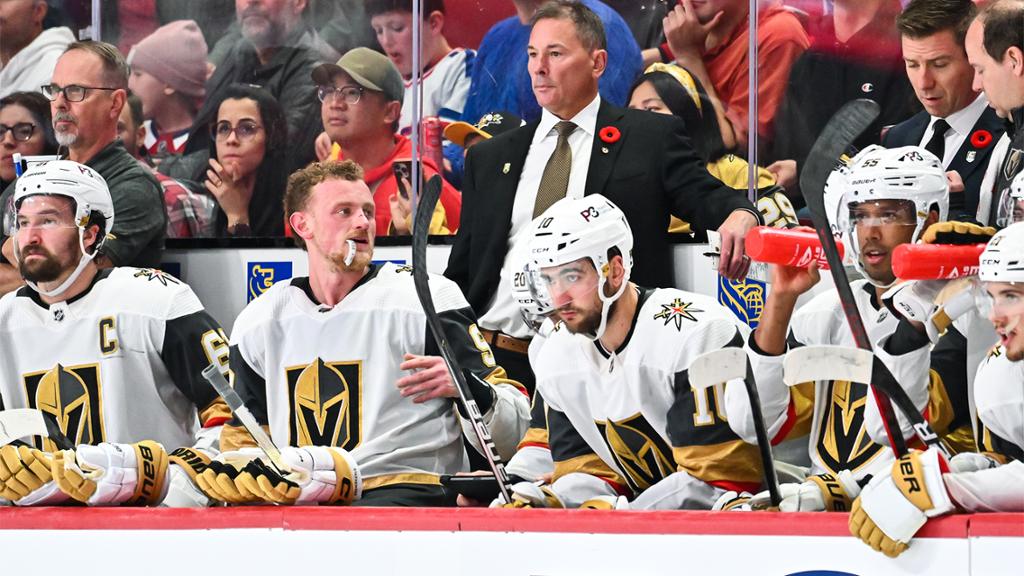 Welcome to the NHL On Tap. Three NHL.com writers will share what they are most looking forward to on the schedule each day. Today, their choices from six games Tuesday.

There are so many storylines in the game between the Boston Bruins (20-3-0) and Vegas Golden Knights on Monday at TD Garden (7 p.m. ET; TVAS, NESN, ATTSN-RM, ESPN+). Not only is Bruce Cassidy returning to Boston, where he coached for six seasons and reached Game 7 of the Stanley Cup Final in 2019 before losing to the St. Louis Blues, but the Bruins are still on their historic run of 14 consecutive home wins, an NHL record to start a season. Cassidy admitted Sunday that he took a few minutes on the home bench at TD Garden to look around and ponder the banner he wasn’t able to add to the rafters before he was fired by the Bruins on June 6. But he could take a measure of revenge, if the Golden Knights (18-7-1) are able to win Monday and end Boston’s home winning streak. It’s also a clash between two of the top three teams in the NHL — only the New Jersey Devils have more points in the Eastern Conference than the Bruins and the Golden Knights lead the West — in what could even be a Stanley Cup Final preview. — Amalie Benjamin, staff writer

Two teams expected to contend and perhaps go far in the Stanley Cup Playoffs would not qualify if the season ended today. Of course, the season does not end today, which leaves the St. Louis Blues and New York Rangers time to figure it out beginning at Madison Square Garden (7 p.m. ET; NHLN, MSG, BSMW, SN NOW). The Blues (11-13-0) have lost three in a row and five of six (1-5-0). Goalie Jordan Binnington has lost five consecutive starts (4.84 goals-against average, .841 save percentage) and was pulled in the second period of a 6-2 loss to the Pittsburgh Penguins on Saturday, and it won’t get easier for St. Louis with 13 games this month and three sets of back to backs. The Rangers (11-10-5) dropped home games to the Ottawa Senators on Friday and Chicago Blackhawks on Saturday — ending Chicago’s eight-game losing streak — and have lost five of six (1-4-1) and four straight at the Garden (0-3-1). Crazy things have happened – the Blues were last in the NHL on Jan. 2, 2019 and won the Stanley Cup – but St. Louis and New York are each in a crisis that could get worse if either of them fall too far out of the race by the NHL All-Star break, or sooner. — Jon Lane, staff writer

Connor McDavid will look to extend his point streak to six games when the Edmonton Oilers (14-11-0) host the Washington Capitals at Rogers Place (8:30 p.m. ET; SN, NBCSWA, ESPN+, SN NOW). McDavid had two goals and two assists in a 5-3 win against the Montreal Canadiens on Saturday. It was his fourth straight multipoint game, and the Oilers captain has five goals and seven assists in his past five games. Capitals captain Alex Ovechkin has eight points (four goals, four assists) in his past six games, and is tied with Jaromir Jagr for the most game-opening goals in NHL history (135). Ovechkin has 793 career NHL goals, eight behind Gordie Howe (801) for second in NHL history. — Mike G. Morreale, staff writer

Forward Artturi Lehkonen is questionable for Colorado (13-8-1) after sustaining an upper-body injury in the first period of a 5-1 loss at the Boston Bruins on Saturday. The Flyers (8-12-5), who will play the fourth of a five-game homestand, are 1-9-3 in their past 13 games.

Pavel Buchnevich will play his 93rd game for the Blues since he was acquired in a trade with the Rangers on July 23, 2021, for Sammy Blais and a second-round pick in the 2022 NHL Draft. He’s scored 38 goals with St. Louis, second to Vladimir Tarasenko‘s 39 since making his debut. New York center Mika Zibanejad has eight power-play goals, tied for fourth-most in the NHL with Bo Horvat (Vancouver Canucks).

Center Jack Eichel will be a game-time decision for the Golden Knights after he left in the third period of Saturday’s 4-1 win at the Detroit Red Wings with an apparent lower-body injury. Defenseman Alex Pietrangelo will miss his fourth straight game with a personal issue. The Bruins have won three straight and 10 of 11 games and lead the NHL in both goals against (2.13) and goals for (4.00).

John Carlson has scored six goals in his past nine games for Washington, which is 1-2-1 thus far on a six-game road trip. Leon Draisaitl has 11 points (six goals, five assists) during a five-game point streak that includes three straight multipoint games for Edmonton.

Forward Andrew Mangiapane has four points (three goals, one assists) in his past three games for the Flames (11-10-3), who have won two of their previous three. Forward Christian Fischer has a goal in two straight games for the Coyotes (7-12-3), who are 1-5-3 in their past nine.