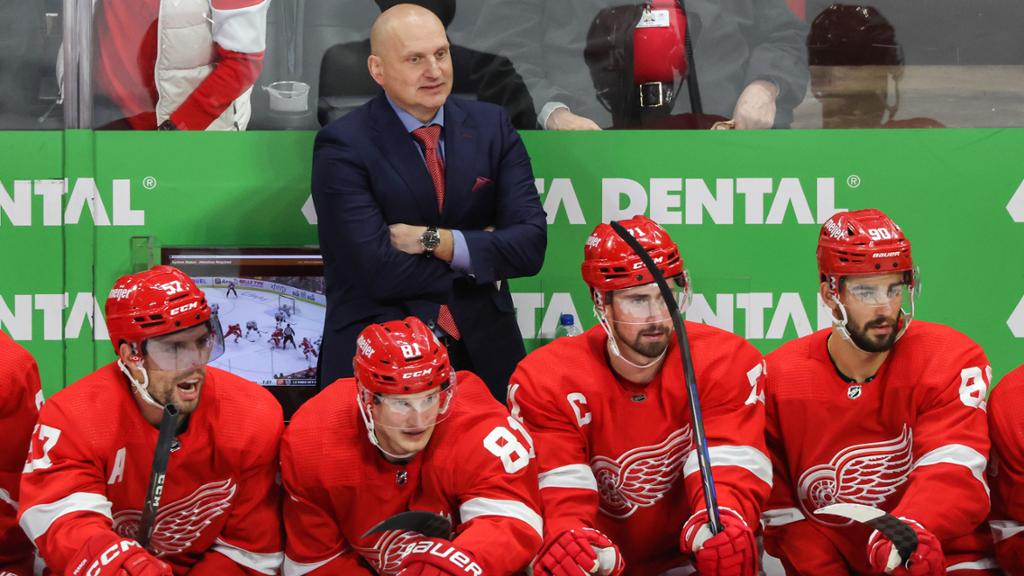 Welcome to the NHL On Tap. Three NHL.com writers will share what they are most looking forward to on the schedule each day. Today, their choices from the five games Sunday.

It’s been a tough start for the San Jose Sharks, who have lost six of their first seven games (1-6-0) after a 2-1 loss to the New Jersey Devils on Saturday. A lack of offense has been the biggest issue. Outside of their 3-2 overtime win against the New York Rangers on Thursday, the Sharks have scored two or fewer goals in their other six games. They’ll try to generate more offense when they visit the Philadelphia Flyers (7 p.m. ET; NBCSP, NBCSCA, ESPN+, SN NOW) and it won’t be easy. The Flyers (4-1-0) are allowing 2.20 goals per game. San Jose forward Kevin Labanc, who missed all but 21 games with a shoulder injury last season, scored his first goal of the season Saturday and perhaps that can get him going at least. — Tracey Myers, staff writer

The Seattle Kraken (2-2-2) visit the Chicago Blackhawks (2 p.m. ET; NBCSCH, ROOT-NW, ESPN+, SN NOW) coming off a 3-2 win against the Stanley Cup champion Colorado Avalanche on Friday, one coach Dave Hakstol called “a rock solid 60 minutes.” Seattle took a 2-0 lead two minutes into the second period and refused to fold after Colorado scored a shorthanded goal to tie it 2-2 at 6:58 of the third and goalie Philipp Grubauer left with a lower-body injury at 10:17. The Blackhawks (2-2-0) survived losing goalie Petr Mrazek (groin strain) after the second period to defeat the Red Wings 4-3 in overtime of their home opener Friday. It was their second consecutive multigoal comeback victory. Like the Kraken, the Blackhawks are trying to gain respect with a mentality Chicago forward Andreas Athanasiou said is “Put your nose down, go out there and work.” Expect a tight game between two teams not planning to go away easily. — Jon Lane, staff writer

Goalie Martin Jones is expected to start for Seattle and Joey Daccord was recalled from Coachella Valley of the American Hockey League on Saturday with Grubauer day to day. Alex Stalock will start for the Blackhawks. Mrazek was placed on injured reserve retroactive to Oct. 21. Coach Luke Richardson said Saturday the prognosis is encouraging.

The Ducks end a five-game road trip against Eastern Conference opponents. They’re 0-3-1 on the trip, coming off a 2-1 shootout loss to the Boston Bruins on Thursday. Forward Troy Terry leads Anaheim with six points (three goals, three assists) in five games this season. The Red Wings have lost two straight in overtime.

So far, so good for Johnny Gaudreau with the Blue Jackets (2-4-0). The forward has a five-game point streak and leads Columbus with seven points (four goals, three assists). The Blue Jackets have not scored a power-play goal this season (0-for-14) and are coming off a 6-3 loss to the Pittsburgh Penguins on Saturday. The Rangers (3-1-1) have a three-game point streak at home (2-0-1) to start a season for the first time since 2009-10 (3-0-0). Artemi Panarin‘s five-game point streak is the longest season-opening run by a Rangers player since Brad Richards (five in 2011-12). His 11 points (three goals, eight assists) are tied for most after the first five games with Rod Gilbert in 1971-72.

The Islanders (2-3-0) are coming off a 5-3 loss to the Tampa Bay Lightning on Saturday. They are 18-for-18 on the penalty kill and 1-for-15 on the power play this season. Matthew Tkachuk is the first Panthers player with at least one point in each of the first five games to start a season and leads Florida (3-1-1) in goals (three), assists (five), points (eight) and shots on goal (24). He scored in a 3-1 season-opening win at the Islanders on Oct. 13.

Sharks forward Oskar Lindblom returns to Philadelphia for the first time after five seasons with the Flyers. Lindblom was diagnosed with Ewing’s sarcoma, a form of bone cancer, Dec. 10, 2019. The Flyers defeated the Nashville Predators 3-1 on Saturday and have allowed two goals or fewer in each of their wins.