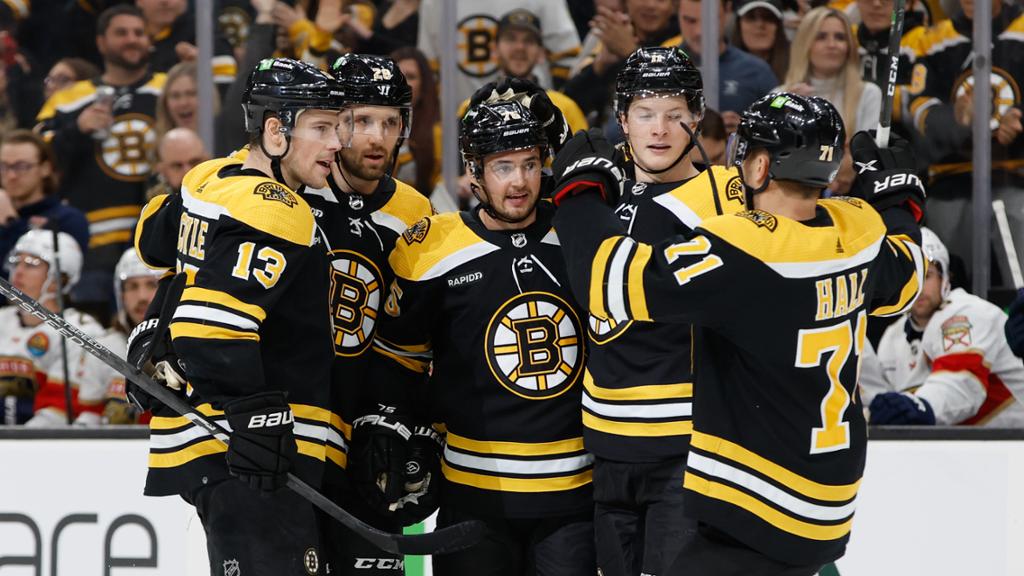 Two of the hottest teams in the NHL face off when the Winnipeg Jets visit the Boston Bruins at TD Garden on Thursday (7 p.m. ET; NESN, TSN3, ESPN+, SN NOW). The Bruins (25-4-2), who are 4-0-1 in their past five games, can also extend their home point streak to 20 games; they are 17-0-2. Everything has been clicking for Boston, which has the most points in the League (52), the biggest goal differential (plus-54) and ranks in the top three in goals for, goals against, power-play and penalty-killing percentage. The Jets (21-10-1), who missed the Stanley Cup Playoffs last season and are one point back of the Dallas Stars for first in the Central Division, have won three of four and are 7-3-0 in their past 10 games. — David Satriano, staff writer

Video: [email protected]: Bergeron snipes the puck for a goal in 3rd

In an interesting scheduling quirk, the New York Islanders and New York Rangers will have their final of three regular season meetings on Thursday despite there being more than three months remaining in the 2022-23 season. The Islanders will be looking to sweep the season series from the Rangers when the two teams clash at what is sure to be a raucous Madison Square Garden (7 p.m. ET; MSG, MSGSN, ESPN+, SN NOW). The Islanders (18-13-2) have allowed three goals in their two previous games against the Rangers, a 3-0 victory on Oct. 26 and a 4-3 win on Nov. 8. The Rangers (18-11-5) had their seven-game win streak end with a 3-2 loss to the Pittsburgh Penguins on Tuesday although coach Gerard Gallant said he thought his team “played great” despite the defeat. — Mike Zeisberger, staff writer

Jeff Carter is poised to play his 1,200th NHL game and is one assist shy of 400 when the Penguins host the Carolina Hurricanes (7 p.m. ET; SN, TVAS, ATTSN-PT, BSSO, ESPN+). Selected in the first round (No. 11) of the 2003 NHL Draft by the Philadelphia Flyers, Carter has 821 points (422 goals, 399 assists) with the Flyers, Penguins, Columbus Blue Jackets and Los Angeles Kings. He won the Stanley Cup twice with the Kings (2012, 2014). The Penguins (19-9-4) look to pay back the Hurricanes for ending their seven-game win streak with a 3-2 victory in Raleigh on Dec. 18. The Hurricanes (20-6-6) will try to extend their six-game win and 12-game point streaks (10-0-2). Carolina won their sixth straight with a 2-1 victory against the New Jersey Devils on Tuesday when rookie goalie Pyotr Kochetekov made 37 saves. Pittsburgh has won eight of their last nine following their 3-2 win against the New York Rangers at hom Tuesday. Penguins forward Evgeni Malkin had a goal that extended his point streak to nine games (three goals, 10 assists). — William Douglas, staff writer

Video: [email protected]: Carter puts it in the net for OT win

The Flyers (11-15-7) come to Toronto on the heels of a 5-3 win against the Columbus Blue Jackets on Tuesday and have won two of three. Flyers forward James van Riemsdyk, who played for the Maple Leafs from 2012-2017, has seven points (three goals, four assists) in his past five games. Forward Michael Bunting has scored in four of his past five games for the Maple Leafs (20-7-6) and recorded his 100th NHL point in Toronto’s 4-1 victory against the Tampa Bay Lightning on Tuesday.

This is the third of a four games between the teams this season; Carolina won each of the first two games by a 3-2 score. Hurricanes goalie Pyotr Kochetekov has won five starts in a row and is 8-0-2 in his past 10 games (nine starts). Sidney Crosby has seven points (three goals, four assists) in his past five games, including a goal and an assist in Pittsburgh’s 3-2 win against the New York Rangers on Tuesday.

The Islanders are 1-1-2 heading to Madison Square Garden for the finale of their five-game road trip after a 1-0 shootout loss at the Colorado Avalanche on Monday. The offensive catalyst for the Rangers of late has been forward Vincent Trocheck, who has nine points (two goals, seven assists) in a five-game point streak.

The Capitals (17-13-4) are 7-1-0 in their past eight and will be seeking to extend their winning streak to three. This will be Washington forward Alex Ovechkin‘s fourth chance to tie Gordie Howe for second on the all-time NHL goal list with 801; he’s gone without a goal the past three games. Forward Drake Batherson has a nine-game point streak (six goals, seven assists) for the Senators (14-16-2), who’ve lost two in a row after a four-game winning streak.

Jets forward Kyle Connor has a 10-game point streak (seven goals, 10 assists), as does defenseman Josh Morrissey (one goal, 12 assists). Bruins forward David Pastrnak can extend his point streak to 10 games. He has 11 points (seven goals, four assists) in his past nine games and leads Boston in goals (21), assists (22) and points (43).

Seattle (18-10-3), which will look to extend its winning streak to three games, has been led by the line of Andre Burakovsky, Jordan Eberle and Matty Beniers, who have combined for 77 points (28 goals, 49 assists). The Canucks (13-15-3) have lost six of their past eight home games and have not won in regulation at Rogers Arena since they defeated the Los Angeles Kings 4-1 on Nov. 18.

Forward Elias Lindholm has been hot with eight points (two goals, six assists) in his past three games for the Flames (15-12-6), who have just two regulation losses in the past 10 games and will be looking to extend their winning streak to three. The Kings (18-12-5) are looking to win their fourth in a row, having outscored the opposition 10-5 in their past three.