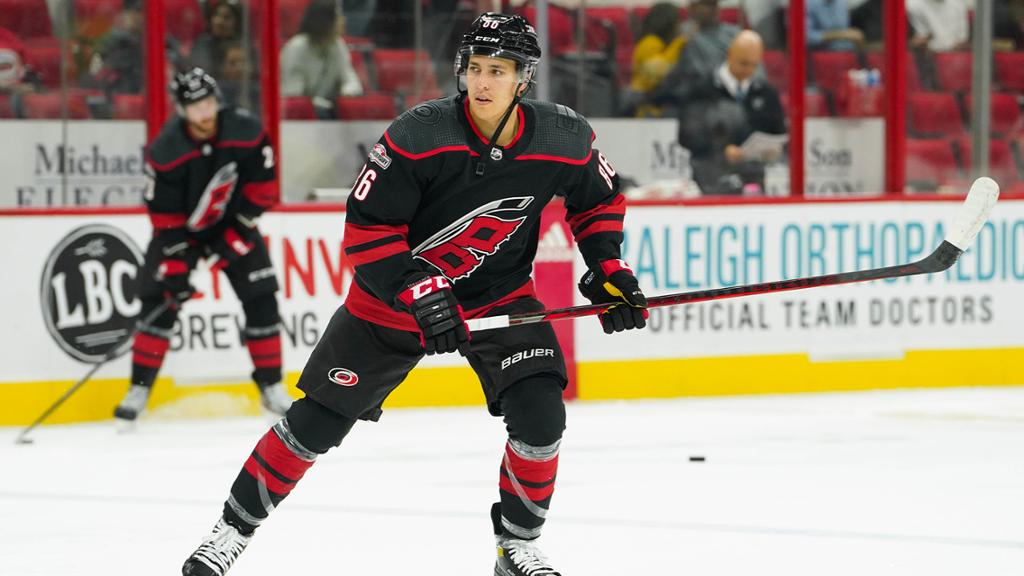 The forward has missed the past eight games with an upper-body injury. He hasn’t played since Nov. 10, when he had two assists in a 7-2 win against the Edmonton Oilers.

“Now that he’s out there, you can at least think that it’s coming,” Carolina coach Rod Brind’Amour said. “We just want to make sure we don’t have a setback. I would hope [he plays], but we’ll see.”

Teravainen has seven assists in 14 games. The Hurricanes are 2-2-4 during his absence.

Goalie Frederik Andersen, who has missed 10 games with a lower-body injury, continued to skate on his own but will not be on the road trip. He last played in a 3-1 loss against the Toronto Maple Leafs on Nov. 6.

“Until you see guys out there practicing, there’s no point in bringing guys,” Brind’Amour said. “They get better work and better treatment done here.” — Kurt Dusterberg

Nathan Bastian is getting further evaluation on his injured shoulder Monday, but the forward is expected to miss some time, Devils coach Lindy Ruff said.

Ruff said the Devils do not have a timeline yet on how long Bastian will be out. He was injured during the first period of a 5-1 win against the Washington Capitals on Saturday and will miss his first game Monday, when New Jersey plays the New York Rangers at Madison Square Garden (7 p.m. ET; NHLN, MSG, MSGSN, ESPN+, SN NOW).

“We don’t know what it’s going to exactly be so I’m not going to put anything out there,” Ruff said.

Alexander Holtz will replace Bastian against the Rangers. The forward was recalled from Utica of the American Hockey League on Monday.

Holtz has one goal in four games with the Devils this season. They sent him to Utica on Nov. 22 and he had four points (two goals, two assists) in three games.

“We know he’s got a great shooting skill so we’ll use him on our second power play,” Ruff said of Holtz. “We’re hoping he gained some confidence down there, feels good after playing three games.” — Dan Rosen

Cam Atkinson practiced for the first time this season but is not ready to play, Flyers coach John Tortorella said.

The forward has been week to week since Sept. 25 with an upper-body injury.

Tortorella said it was good to see Atkinson with the group because of the skill and energy he brings.

“Cam’s a great pro, an important player to this organization,” Tortorella said. “To get some different blood in the lineup, a quality National Hockey League player, it would be a big boost for us.”

“It’s tough because you want to be out there and help the team,” Atkinson said. “Definitely getting closer and I’m going to help the team as much as I can.”

Konecny was placed on injured reserve Monday, and defenseman Egor Zamula was recalled from Lehigh Valley of the American Hockey League. Tortorella said Zamula will play Tuesday, possibly in place of defenseman Tony DeAngelo, who did not practice Monday. Tortorella said DeAngelo was “just banged up.” — Adam Kimelman

James Reimer was placed on injured reserve with a lower-body injury.

The goalie last played in a 5-2 loss to the Los Angeles Kings on Friday. He did not play in a 4-3 overtime loss to the Vancouver Canucks on Sunday, with Kaapo Kahkonen starting and Aaron Dell recalled from San Jose of the AHL to be the backup.

Forward Jeffrey Viel was recalled from San Jose of the AHL and could make his season debut when the Sharks begin a four-game road trip at the Montreal Canadiens on Tuesday (7 p.m. ET; TSN2, RDS, NBCSCA, ESPN+, SN NOW).

Alex Galchenyuk agreed to a one-year contract. Financial terms were not released.

The forward was with the Avalanche on a professional tryout contract during training camp but was released Sept. 28. He then signed a PTO with Colorado of the AHL on Nov. 9 and had seven points (three goals, four assists) in seven games.

The defenseman did not have a point and averaged 15:22 of ice time in eight games. He had attended Bruins training camp on a professional tryout and signed a one-year, $1 million contract Oct. 12.