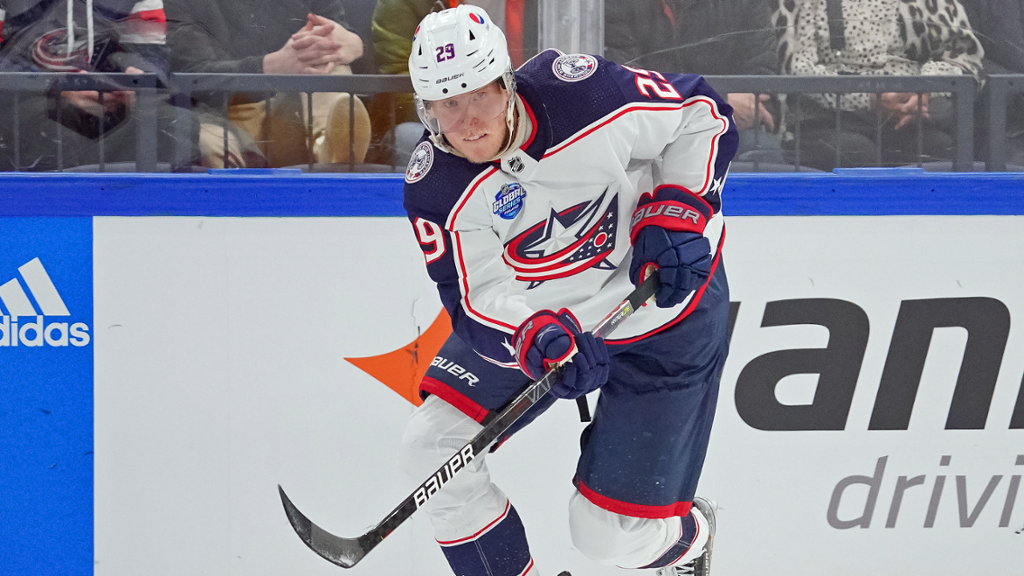 Patrik Laine returned from injury for the Blue Jackets and scored twice in a 4-1 win against the Winnipeg Jets at Canada Life Centre in Winnipeg on Friday.

He injured his ankle Nov. 12 against the New York Islanders and missed seven games before being removed from injured reserve Thursday. Laine, who also missed six games from Oct. 14-23 with an elbow injury, has six points (four goals, two assists) in nine games.

“I had a really good summer and really good camp and felt like we got some things going with our line, and been out twice already,” Laine said. “So, it’s definitely frustrating for me. But like I’ve said before, crying about it is not going to help. I’ve just got to work myself back. I’m happy to be playing tonight and just get back to rhythm and hopefully have a good rest of the season.”

Jets coach Rick Bowness said he knows Laine has the ability to change the game.

The Blue Jackets also said Friday that forward Jakub Voracek is out indefinitely with a concussion, and defenseman Jake Bean will be out 4-6 months after having shoulder surgery recently.

Voracek hasn’t played since he was injured in a 6-3 loss to the Colorado Avalanche on Nov. 4 as part of the 2022 NHL Global Series in Finland. Bean has missed six games since a 5-4 overtime win against the Philadelphia Flyers on Nov. 15. — Craig Merz

Calle Jarnkrok will miss at least two weeks for the Maple Leafs with a groin injury.

The forward was injured in a 3-1 win against the San Jose Sharks on Wednesday. He played 9:04 before leaving in the second period.

“He’s going to be at least two weeks and we’ll kind of take it from there,” coach Sheldon Keefe said. “He won’t travel with us here, we’ll see where he’s at once we return and that will give us a better sense maybe of what it looks like beyond that.”

TJ Brodie will travel with the Maple Leafs on the road trip but is not expected to play. The defenseman has missed the past 10 games with an oblique injury.

“He’s progressing well,” Keefe said. “Not necessarily expecting him to play on this trip but we do have a practice day in Dallas and obviously morning skates, I think we will see him more involved in regular team activities.”

Brodie has two assists in 15 games this season. — Dave McCarthy

The forward has missed the past 10 games with an upper-body injury and his status is to be determined for Carolina’s game against the Los Angeles Kings on Saturday (10:30 p.m. ET; BSW, BSSO, ESPN+, SN NOW).

Teravainen has seven assists in 14 games this season.

Cal Petersen was loaned to Ontario of the American Hockey League on Thursday after clearing waivers.

The 28-year-old goalie is 5-3-2 with a 3.75 goals-against average and .868 save percentage in 10 games (nine starts) this season. He allowed four goals on 16 shots in a 9-8 overtime loss to the Seattle Kraken on Tuesday after replacing Jonathan Quick in the second period.

“I think the idea here is Cal can go down to the American League and play in games and get that structure that we believe in, and come back up and help us,” Kings general manager Rob Blake said.

Pheonix Copley was recalled from the AHL and served as Quick’s backup against the Arizona Coyotes. Quick made 18 saves in a 5-3 win.

Petersen is in the first season of a three-year, $15 million contract extension he signed Sept. 22, 2021.

Los Angeles entered Thursday 27th in the NHL in goals-against average (3.60) and last in save percentage (.879).

“It’s obviously a sign or a signal of performance,” coach Todd McLellan said. “And one guy bears the brunt of it, and he plays a big part in it, but we’re all responsible for goals-against average and save percentage. And we haven’t done a sufficient enough job of protecting our goaltenders and helping them up. You can’t play perfect and they have to make a big save every now and then, but we still can do a better job of insulating them.”

Petersen allowed at least three goals in nine of his 10 games.

“I felt sorry for him because, you know, maybe he hasn’t performed to the best of his ability, and he would be the first probably to say that,” defenseman Drew Doughty said. “But at the same time, we haven’t played well in front of him. … And, yeah, it was a little shocking, but I have full confidence that Cal is going to play well when he gets down there and when he comes back, he’s going to really help us.” — Dan Greenspan

Brendan Gallagher did not play for the Canadiens against the Calgary Flames on Thursday because of a lower-body injury.

The forward is day to day remains with the team on its road trip, which continues at the Edmonton Oilers on Saturday, the Vancouver Canucks on Monday and Seattle on Tuesday.

Alex Pietrangelo did not play for the Golden Knights in a 4-3 loss to the Pittsburgh Penguins on Thursday.

The defenseman also missed a 3-2 shootout win against the Columbus Blue Jackets on Monday because of personal reasons, but could return at the Detroit Red Wings on Saturday.

Kyle Palmieri was placed on injured reserve Thursday, retroactive to Nov. 21, because of an undisclosed injury.

The forward has missed the past four games and has nine points (six goals, three assists) in 20 games this season.

Forward Cal Clutterbuck is day to day with an upper-body injury sustained in a 3-1 loss to the Flyers on Tuesday. He has three points (two goals, one assist) in 22 games this season and is fifth in the NHL in hits (85).

Forwards Cole Bardreau and Hudson Fasching were recalled from Bridgeport of the AHL on Thursday. Bardreau was in the lineup for the Islanders when lost 4-1 to the Nashville Predators on Friday, his first NHL game since Feb. 13, 2020. Fasching played 11 games with the Coyotes last season.