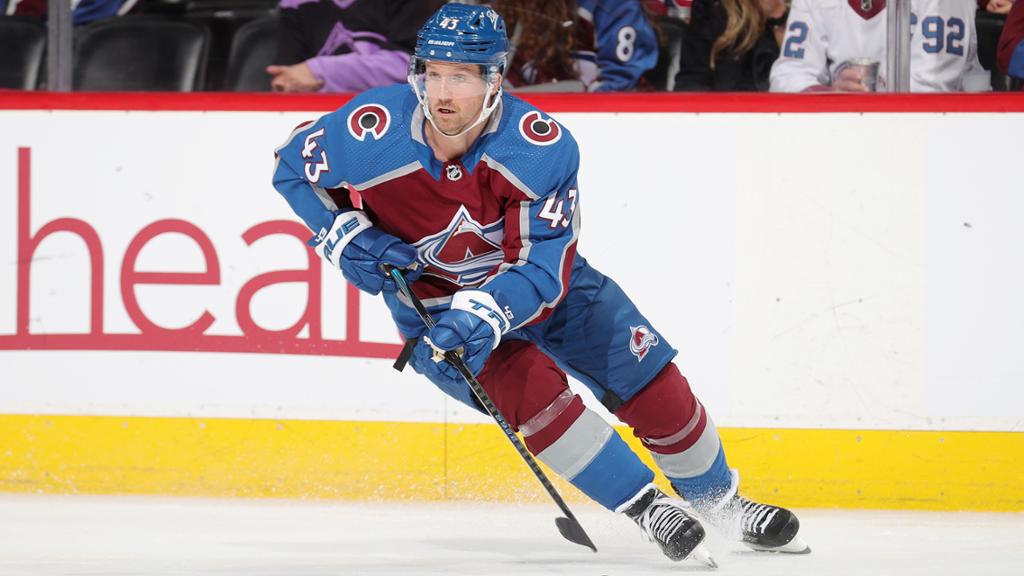 The forward has missed the first 36 games of the season after having abductor surgery in November.

“Extremely happy, excited,” Helm said. “A little nervous but happy. It’s been a long road. Looking forward to getting in.

“It was kind of a question at the end of the year. Got the surgery done. I expected things to be healed up a lot quicker than they did. A couple of setbacks, just things that didn’t pan out the way we expected.”

Helm had seven goals and eight assists in 68 games last season. He scored two goals, including a game-winner, and had three assists in 20 Stanley Cup Playoff games en route to winning the Stanley Cup.

“He’s been out a long time, so I’m not expecting miracles,” Avalanche coach Jared Bednar said. “We know what he can do. We’ll give him some limited minutes and get him back into this thing.”

Helm signed a one-year contract with the Avalanche on July 13.

Bednar also said that captain Gabriel Landeskog, who has also missed the first 36 games of the season following knee surgery, is “nowhere close” to returning. There’s no update on Bowen Byram, a defenseman who’s been out with a lower-body injury since Nov. 4.

Josh Manson (lower body) will start skating Tuesday, Bednar said. The defenseman has been out since Dec. 1. — Ryan Boulding

Patrik Laine is out of NHL COVID-19 protocol and practiced with the Blue Jackets.

The forward has missed three games. He took line rushes with Johnny Gaudreau and Kent Johnson.

Kirill Marchenko was moved to the third line to the right of left wing Eric Robinson and center Cole Sillinger, with Carson Meyer the apparent healthy scratch for the game at the Ottawa Senators on Tuesday (7 p.m. ET; TSN5, RDS2, BSOH, ESPN+, SN NOW).

Nick Blankenburg practiced in full. Though the defenseman will not play against the Senators, Larsen said his return is likely in the near future. Blankenburg has been out since Nov. 10 with an ankle injury. His projected recovery timeline was 6-8 weeks.

Goalie Daniil Tarasov wasn’t on the ice. He missed a 4-1 win at the Chicago Blackhawks on Saturday with an upper-body injury.

T.J. Oshie could play for the Capitals when they host the Buffalo Sabres on Tuesday (7 p.m. ET; SNE, SNP, NBCSWA+, MSG-B, ESPN+, SN NOW) after missing the past six games with an upper-body injury.

The forward who was injured against the Toronto Maple Leafs on Dec. 17, was a full participant at practice Monday, including working with the first power-play unit, but coach Peter Laviolette wasn’t ready to commit to the forward playing against the Sabres.

“Probably have a better idea in the morning just see how things go at the skate today,” Laviolette said. “Probably if conversations go well, he’s probably a little bit ahead of others, but we’ll see after the practice today … If he was ready, we wanted to get him the reps on the power play to make sure he’s ready.”

Though forwards Tom Wilson (left ACL surgery) and Nicklas Backstrom (left hip resurfacing surgery) also were full participants, Laviolette said they “still have a bit” to go before they are ready to each make their season debut.

Backstrom returned to practice after being in NHL COVID-19 protocol last week.

“Nothing wrong, no setbacks, just working their way back,” Laviolette said. — Tom Gulitti

The defensemen missed four games with a neck injury sustained in a 4-1 win against the Tampa Bay Lightning on Dec. 20. He practiced Monday on a pair with Timothy Liljegren.

“Just looking for him to get back to playing the way he was,” Toronto coach Sheldon Keefe said. “He’d been playing really well and playing lots for us. We’re getting healthy back there now but still wanting guys to find their game again and show the progress they’ve made.

“In Rasmus’ case before he was injured, he was taking on a lot because of the other injuries we had. Others have come in and done a job since he’s been injured and that’s a really good sign for our depth.”

Morgan Rielly will be on a pair with TJ Brodie and Mark Giordano will skate with Justin Holl. Conor Timmins is expected to come out of the lineup. — Dave McCarthy