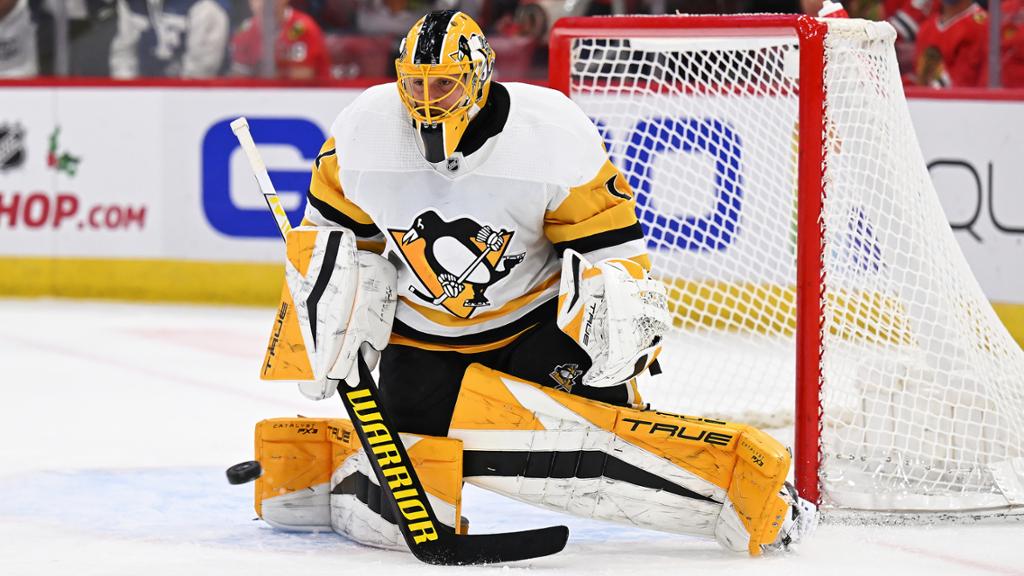 Casey DeSmith is being evaluated for an upper-body injury.

The goalie did not practice with the Penguins on Tuesday after making 29 saves in a 5-3 win against the Chicago Blackhawks on Sunday. Pittsburgh had a scheduled day off Monday.

Mike Chiasson, the emergency backup, served as the second goalie opposite Tristan Jarry.

Jarry, considered the No. 1 goalie, could start against the Calgary Flames on Wednesday (7 p.m. ET; SN1, TVAS, ATTSN-PT, ESPN+, SN NOW). He made 32 saves in a 3-0 win against the Winnipeg Jets on Saturday.

The forward has eight points (five goals, three assists) in 16 games this season.

Joel Armia will return after missing three games with a xx-injury. He has no points in seven games this season.

Seth Jones could return for the Blackhawks when they play the Dallas Stars on Wednesday (8:30 p.m. ET; BSSWX, NBCSCH+, ESPN+, SN NOW).

The defenseman has missed 10 games since injuring his right thumb in a 4-3 overtime loss to the Buffalo Sabres on Oct. 29. He has four assists in eight games this season.

“That’s the plan as of now,” Jones said of playing Wednesday. “I’ve been getting an X-ray once a week, so the doc liked what he saw. It’s been three-and-a-half weeks. There’s a reason we said 3-4 (weeks), so we’re kind of right on schedule.”

“I think he seemed fine out there today, you know, excited to get back,” he said. “I’m sure he wants to (play) because he lives [in Texas or is] from there. I think we just got to double-check. Today was his first full practice with us, but he looked fine. I think he has a new splint to get used to or kind of a protection thing. If he’s good to go tomorrow morning, I’m sure he’ll be in.” — Tracey Myers

Ilya Samsonov will travel with the Maple Leafs on their upcoming four-game road trip which begins Wednesday at the Minnesota Wild but is not expected to play this week.

The goalie has missed seven games since sustaining a knee injury Nov. 5 in a 2-1 win against the Boston Bruins.

Samsonov did not participate in the morning skate Monday prior to a 3-2 overtime loss to the New York Islanders but practiced Tuesday. He has skated with the Maple Leafs at times in practice and morning skates since sustaining the injury.

“He seems like he is taking a step positively,” Toronto coach Sheldon Keefe said Monday. “We kept him off the ice today, but he is going to come on the road and travel with us. At this point anyway, that’s more so to stay in rhythm with our group. Not expecting him to be available for us this week.”

TJ Brodie will not be on the road trip. The defenseman has not played since Nov. 11 in a 4-2 win against the Pittsburgh Penguins, missing the past four games with an oblique injury.

“Brodie is not progressing as quickly as [the medical staff] would like,” Keefe said. “He will not travel with us.”

Brodie has two assists in 15 games this season. — Dave McCarthy

Forward T.J. Oshie (lower body) went through a full practice with the Capitals for the second straight day, but defenseman Dmitry Orlov (lower body) did not practice Monday after being a full participant in practice Sunday.

Coach Peter Laviolette wasn’t prepared to say Monday if either player will play in Washington’s next game against the Philadelphia Flyers on Wednesday (7:30 p.m. ET; TNT, SN NOW).

“I’m going to stay away from confirming anything with these guys,” Laviolette said. “We’re still trying to push these guys to get them back to where they need to be. So, I’d rather stay away from commenting one way or the other until we know for sure.”

Laviolette wouldn’t say if there is concern about Orlov missing practice with the Capitals not scheduled to practice Tuesday.

“No, they’re both in the same boat,” he said. “They’re working every day to get back. So, it’s today he’s not out there.” — Tom Gulitti