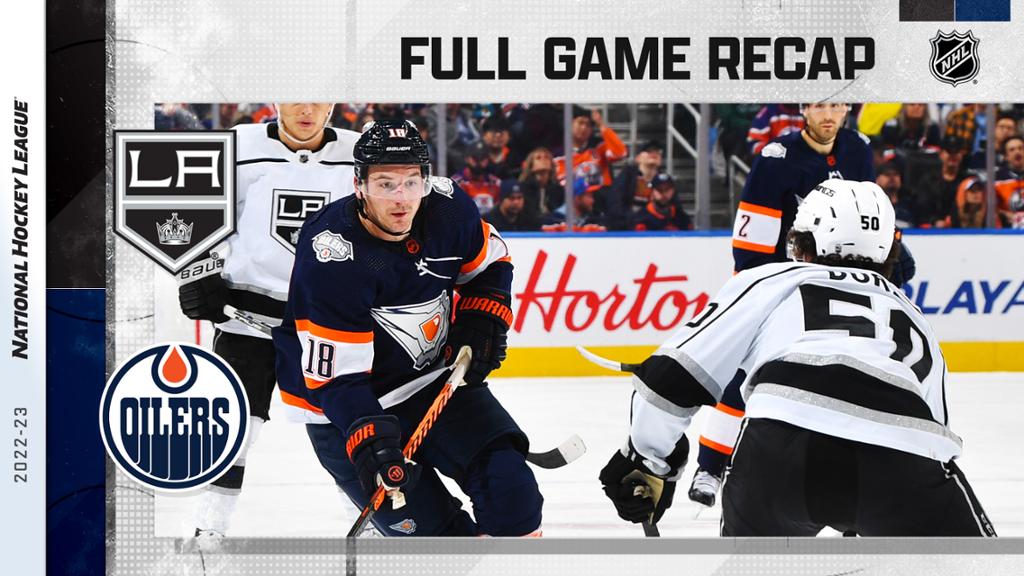 Trevor Moore got his first NHL hat trick in the Los Angeles Kings’ 3-1 win against the Edmonton Oilers at Rogers Place in Edmonton on Wednesday.

It was Moore’s first multigoal game of the season and third in the NHL. He had two goals this season before Wednesday’s game.

“It was kind of funny, I didn’t feel like I had my best tonight,” Moore said. “It was just kind of one of those games where the puck finds you, or I should say my linemates found me, so it was good to get those bounces out there.”

Viktor Arvidsson passed 300 NHL points with three assists for the Kings (11-7-1), who are 5-1-0 in their past six games and 7-2-1 in their past 10. Phillip Danault had an assist, giving him five points (one goal, three assists) during a three-game point streak.

“If you try to work hard every night and try to bring it, you’re going to get rewarded,” Moore said of Danault and Arvidsson.

Zach Hyman scored for the Oilers (9-8-0), who are 2-5-0 in their past seven following a five-game winning streak. Stuart Skinner made 29 saves.

It was the first time Los Angeles and Edmonton played since the Oilers defeated the Kings in Game 7 of the 2022 Western Conference First Round.

“We know these guys well, and that kind of game script just fit right into their game,” Oilers captain Connor McDavid said.

“Going up against two of the best players in the world was fun, and it’s a challenge,” Arvidsson said. “I think we embraced it really well and worked hard and got rewarded.”

Moore put the Kings up 1-0 at 4:23 of the first period on a one-timer from the high slot off Danault’s pass. Arvidsson had the secondary assist.

Arvidsson prevented McDavid from tying the game at 9:42 by knocking down a backhand shot before it could go into an open goal.

“That’s why you don’t quit coming back. You never know what can happen, but good for ‘Arvy,’ Los Angeles coach Todd McLellan said.

Hyman tied it 1-1 at 12:47 of the second period on a backhand shot from just outside the crease after Ryan Murray kept Blake Lizotte‘s attempt to clear the puck in the zone.

Moore gave the Kings a 2-1 lead at 17:12 on a shot from the right circle off Arvidsson’s pass through the slot after a power play expired.

He completed the hat trick when he scored into an empty net with 53 seconds left in the third period for the 3-1 final.

“He’s been there all year for us, offensively. Just hasn’t gone in a lot for him. I haven’t looked lately, but I know he was leading us in shots on goal, which means he is around the net a lot,” McLellan said of Moore.

The Kings outshot the Oilers 13-6 in the first period while blocking 16 shots.

“I think it’s definitely something that we’ve talked about is just starting on time,” Hyman said. “The shot clock can sometimes be deceiving, I think, but you know when you’re down 10-0 on the shot clock, whatever the case may be, it means the other team’s got the puck a lot.”

Los Angeles had 29 blocked shots to eight for Edmonton.

“Kind of from the first minute, it felt like they were getting in front of everything. Credit to them, they did a lot well tonight defensively,” McDavid said.

NOTES: Moore is the first California-born player to get a hat trick for a California-based NHL team. His previous two multigoal games in the NHL were against the Vegas Golden Knights on April 14, 2021, and at the Pittsburgh Penguins on Jan. 3. … The Kings are 8-1-0 when leading after the second period. … This was the second time the Oilers failed to score at least two goals; they were shut out by the St. Louis Blues 2-0 on Oct. 22. … Arvidsson became the ninth player from the 2014 NHL Draft with 300 points. He has 150 goals and 151 assists in 468 games.