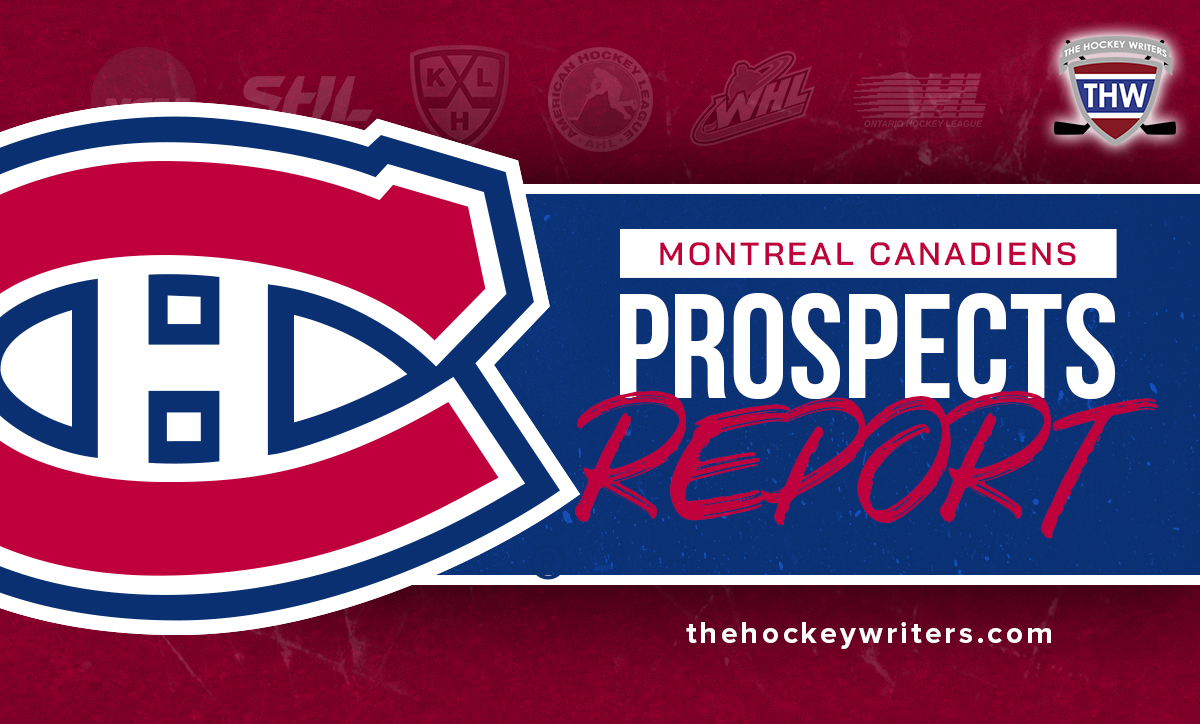 The Montreal Canadiens still has a varied portfolio of prospects paying at different levels across several leagues around the globe. One of those leagues is the Ontario Hockey League (OHL), which traditionally has provided NHL teams with quality prospects, and the Canadiens are taking advantage of this league’s talent as well. Past reports have looked at two top prospects selected in 2022, Owen Beck and Filip Mesar. Now we look to the other prospects who may be flying under the radar but have earned our attention.

Skating mechanics, filling his frame, and adding strength, are all standard points that NHL prospects need to build upon before making the leap to professional hockey. For Logan Mailloux of the OHL London Knights, he has all of those to work on, but the bigger concern is his defensive play. He will need to work on his positioning and decision-making. He has had issues with keying on his responsibilities in his zone and making the right choices on when or when not to jump up into the offensive play. All of this shouldn’t be a surprise for a young man who has played only 31 games in the two seasons prior to this year, due to the pandemic shutdowns, injuries, and suspensions. Despite this, he is still one of the top prospects at that position, behind only Justin Barron in the prospect pool of right-handed defenders.

Offensively, Mailloux has taken a step forward, becoming a point-per-game defenseman with eight points (four goals and four assists) in eight games. This is one point off of his total of last season, where he scored nine points in 12 games played. A full injury free season would go a long way in helping the 19-year-old defenseman getting the experience needed to improve his game.

The Canadiens’ 2022 Third round pick Vincenz Rohrer is off to a strong start to the 2022-23 OHL season. In the first 13 games played, he has scored five goals and 18 points and is on pace to nearly double his point totals from last season of 48 points. Also, he now is a key component of the Ottawa 67’s top line, a team that is considered a powerhouse in the OHL as they sit at the top of the league standings with a 12-1 record.

Despite playing a physical style of hockey, attacking the puck, and winning one-on-one battles using his low center of gravity to gain possession, he plays incredibly disciplined hockey. His ability to read a play and react appropriately demonstrates his high hockey IQ, which may be his best attribute and one that attracted general manager (GM) Kent Hughes and the Habs to him. He can play at a high pace that fits into the Canadiens’ long-term plans and is still on track to become a top-nine NHL forward.

As an OHL rookie in his draft year, Cedrick Guindon was an offensive leader with 30 goals and 59 points for an Owen Sound Attack squad in transition from rebuild to contender. Despite that, Guindon slid down draft lists, likely due to his size, at 5-foot-10, 170 pounds, he was seen as undersized. Eventually, the Canadiens selected him in the fourth round of the 2022 Draft. The Habs may have unearthed a diamond in the rough, as his play early on in the 2022-23 season shows he could have gone a lot earlier.

The 18-year-old left winger now holds a team lead in points with five goals and 13 assists for 18 points in 14 games this season and is on pace for a 90-point season, and with his dominant play, possibly could also earn an invite to Team Canada’s World Junior Championships Selection Camp. His aggressive style in attacking the puck on the forecheck and consistently being well-positioned defensively demonstrate his hockey IQ. Like Rohrer, Guindon’s best attribute is his IQ and ability to play at a high pace. He has played an incredibly disciplined style, having not been penalized so far this season. His aggressive puck pursuit style, and ability to play at pace and do so with discipline will make him invaluable to Owen Sound through the season, and it’s a style that translates well to the professional ranks.

Daniil Sobolev was the Canadiens’ 2021 fifth-round pick. His offensive game wasn’t a reason for his selection, his one goal and two points in 12 games played demonstrates that. His defensive game is the major reason the former GM, Marc Bergevin, selected him. Sobolev will need to improve on his skating, but he plays an “old-school” style of physical defense, boxing out the crease, making the simple clearing plays, closing gaps on the puck carrier quickly, and being willing to defend a teammate with fisticuffs if required. The jury is still out on if the 6-foot, 209-pound defender can translate his game to the professional ranks.

That does it for this week’s edition of the Canadiens Prospects Report. Stay tuned, as each week we will provide updates on some of the young prospects making their way up the Habs’ depth chart.

Blain is a regular contributor as a THW Writer. For over 7 years he has been a part time journalist and podcaster covering the NHL, the Montreal Canadiens and its affiliates. He has made appearances on various television and radio stations as well as podcasts to discuss the Canadiens, and the NHL. Blain has taken the lessons on integrity, ethics, values and honesty that he has learned as a 29 year veteran of the Canadian Armed Forces and applied them to his work as a journalist with the goal to be a trusted source of information and entertainment.