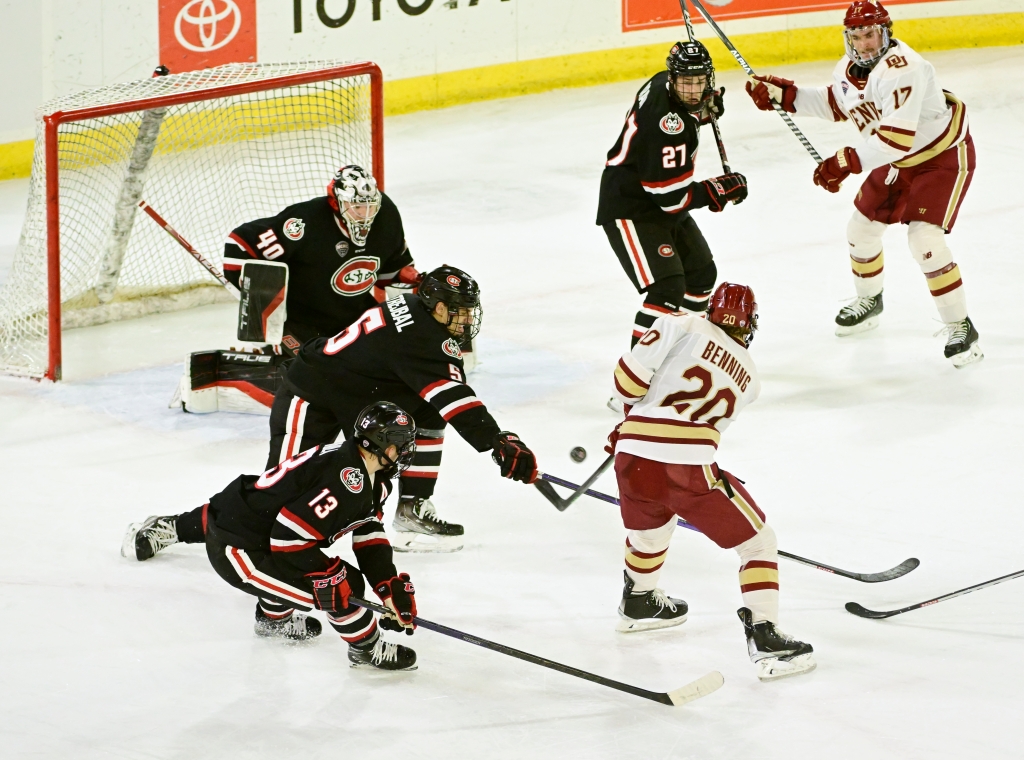 Mike Benning was handed a crucial choice about his hands.

It was a foregone conclusion he would play hockey, growing up in an NHL family in Alberta: “Canada, it’s pretty much all there is up there,” he’ll joke. But he was young enough that his dominant hand was still to be determined.

His father, Brian, was a retired left-handed defenseman who played for five NHL teams. Brian provided the children’s hockey sticks to choose from.

“I don’t remember it,” Benning said, “but my dad tells me, my brother and my sister … ‘OK, you guys can pick what stick you want. Here’s a righty.’ You see the righty and it’s a nice aluminum (stick). And then you’ve got this old, broken lefty.

“So that’s probably how me, my brother and my sister are all righty.”

Benning has been front and center, compiling 10 points in six December games. The 2020 Florida Panthers’ fourth-rounder has seven goals and 19 points this season, maintaining his reputation as one of the best offensive blueliners in NCAA hockey. Last year he was plus-32 with an 18.3% shooting percentage on that menacing right hand.

“He can shoot the puck at a really high level,” DU coach David Carle said. “… As the puck goes in, confidence grows, and then more pucks go in. I think you’re seeing that.”

Carle thinks Denver needs more of that characteristic as a team right now. His focal point emerging from the 20-day hiatus between games is to score at a higher rate. The chances have been there; the finishing, not so much.

The result has been a noticeable uptick in close games. The Pioneers entered the NCAA Tournament last season with an average margin of victory of 3.74 goals. They had only played in four one-score games. “It was a concern of ours going into the tournament,” Carle said.

This season, eight of the first 20 games have been decided by one goal. DU is 7-1 in those games, with four of the last six decided by overtime or late-third-period winners.

“It’s interesting. It’s great that we’re winning those games. … You need to be comfortable in those situations,” Carle said. “But the flip side is you’d like to be able to execute and bear down on some of your chances earlier in the hockey game. Put teams away and extend your lead.”

Wanting to win by more goals is a good problem to have, of course, which sums up the state of DU hockey: Criticisms are nitpicks these days.

The team has been practicing this week without a vital skater. Top Avalanche defensive prospect Sean Behrens is competing at the World Junior Ice Hockey Championships, representing the U.S. in Halifax, Nova Scotia. His temporary absence from DU means more onus on blueline leaders such as Benning and Justin Lee, who was anointed team captain before the season.

Benning skates in the offseason with his brother, Matt, another right-handed defenseman who has played in the NHL since 2016-17 (currently for San Jose). Benning can remember almost a decade ago when he met current Avalanche defenseman Josh Manson, a college teammate of Matt’s at the time.

Their father played in the NHL from 1984-95. Their uncle, Jim, played 10 seasons and then was general manager of the Vancouver Canucks. Their late grandfather Elmer was a longtime scout for the Montreal Canadiens.

“Any time my dad walks in the door, ‘Any hockey news?’ is the first question,” Benning said.

He spent his holiday break at home visiting Matt, who has two young sons of his own. Mike turns 21 Thursday, and already his nephews are next in line: The Bennings begin training their next generation early.

“Little guy got some new skates,” Benning said, “so he was pumped up.”