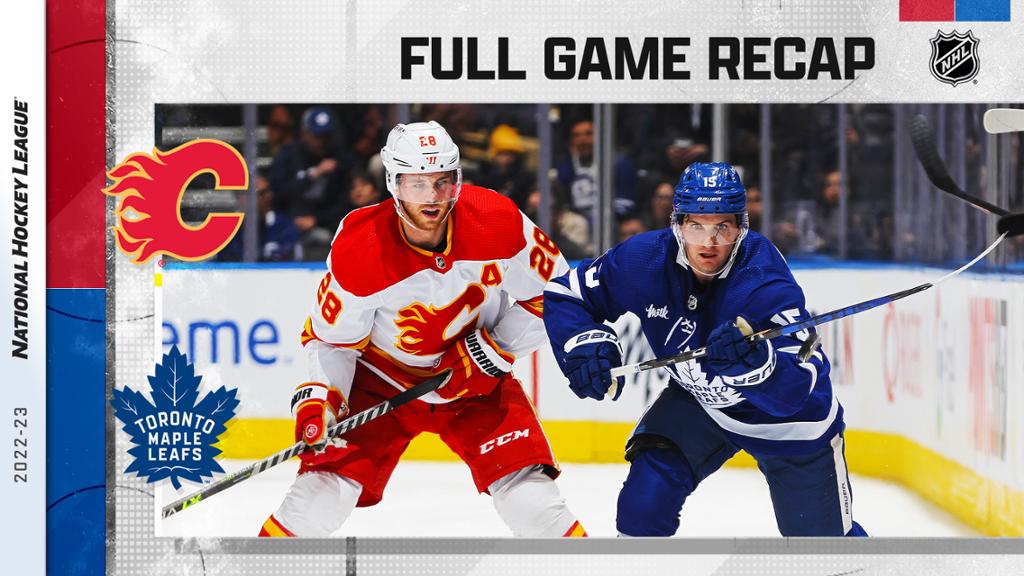 TORONTO — Mitchell Marner extended his point streak to 22 games before scoring 43 seconds into overtime to give the Toronto Maple Leafs a 5-4 win against the Calgary Flames at Scotiabank Arena on Saturday.

Marner, who also had an assist, scored from the left face-off circle on a power play after his initial shot was blocked by Flames defenseman Chris Tanev. He has 30 points (11 goals, 19 assists) during his point streak.

“It was a bit of an ugly one there,” Marner said. “A little bit too much back and forth … but these are the ones sometimes you have to grind through and get two points from. Just great we stayed with it and great night tonight from [the Auston Matthews‘] line just carrying us really and leading the way.”

William Nylander had an NHL career-high five points (two goals, three assists), Matthews had a goal and two assists, and Matt Murray made 22 saves for the Maple Leafs (18-5-6), who have won three straight and extended their point streak to 14 games (11-0-3).

“We’re thrilled we get the win and get two points,” Toronto coach Sheldon Keefe said. “I thought we still did a lot of good things in the game that helped us ensure we get two points.

“I thought we did a lot of things that were not good in the game that made the game a lot harder on ourselves than it needed to be, and it’s been quite some time since that’s been the case. I thought today was not indicative of the type of game we’ve been playing, and as a result, the game was chaotic.”

Noah Hanifin scored twice, Andrew Mangiapane had two assists, and Dan Vladar made 29 saves for the Flames (13-11-4), who are 0-1-1 on a three-game road trip that began with a 3-1 loss to the Columbus Blue Jackets on Friday.

“It was [a] good hockey game,” Calgary coach Darryl Sutter said. “I thought we had a really good effort from our club.”

Hanifin gave Calgary a 4-3 lead at 3:31 of the third period with a power-play goal that trickled through Murray, but Michael Bunting knocked in a rebound after a point shot by Matthews caromed to him off the end boards to tie it 4-4 at 6:10.

Matthews gave Toronto a 1-0 lead at 5:04 of the first period, scoring glove side from the slot on a power play.

The Maple Leafs finished 3-for-6 on the power play. The Flames were 1-for-2.

“Gives them momentum,” Flames forward Jonathan Huberdeau said. “I think we didn’t play bad 5-on-5, but when you give a team like that a lot of power plays they’re going to capitalize on them.”

Video: [email protected]: Kadri rips in shot from the circle for lead

“We battled,” Nylander said. “You’ve got to find ways to win games like this, and it was nice to get one in OT for once.”

Trevor Lewis put the Flames back in front 3-2 at 11:11 of the second period after Mikael Backlund‘s initial shot went off the crossbar.

Nylander again tied it 3-3 at 17:19. He scored from the high slot with a shot that deflected off Tanev, who had the puck stolen from him by Matthews behind the net.

“[Nylander’s] producing at a higher clip,” Keefe said. “He’s been very consistent to start the season here. I think ‘Willy’ can and should be in that top elite tier of players in the League. He’s working his way there.”