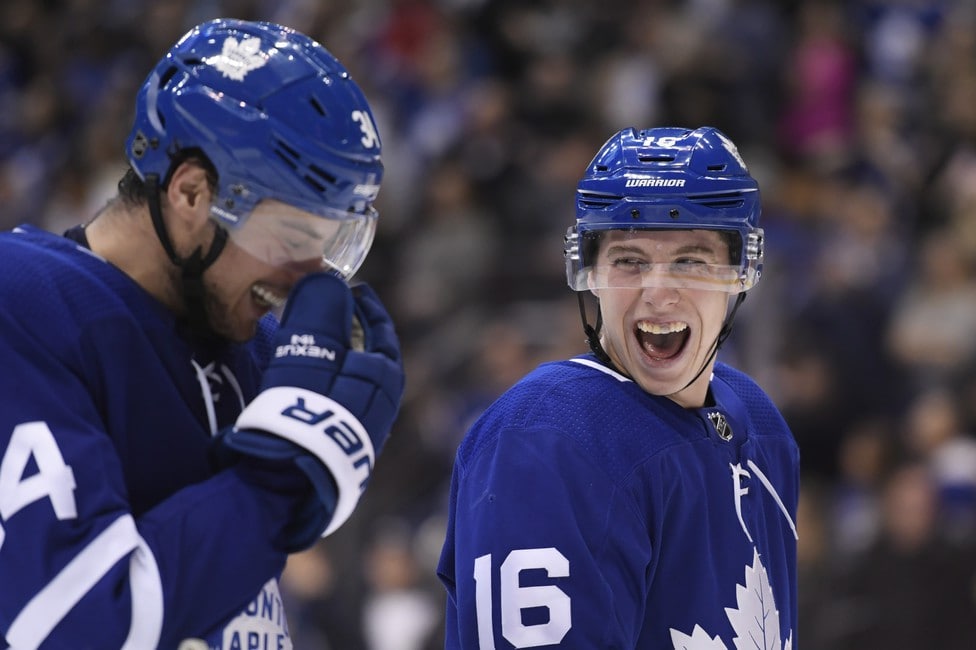 The Maple Leafs went on to beat Carolina 3-1. In fact, the game-winning goal was scored by Tavares after Marner found him alone in front of the net halfway through the third period.

At the time, Keefe spoke as if the change might be temporary – a move designed to counteract the Hurricanes’ game plan for that specific game. As Keefe noted after the game, “it might throw the opposition off a little bit, they had a game plan going in.”

Keefe also noted that switching Marner and Matthews “was more a reflection about how I felt about the game than how I felt about the lines … We were fine but not a lot of things were happening for us offensively … I thought changing up the lines a bit will get the guys’ attention, change the chemistry and it might spark something.”

Keefe and his coaching staff must have reflected further on that decision because the separation of the two Maple Leafs’ stars has now been pro forma. In other words, that’s the way it has become. It’s how the team is rolling.

Marner and Matthews Will Be Productive, Alone or Together

Obviously, both Marner and Matthews will be productive – either together or apart – so the success the team has had cannot all be the result of Keefe’s move in Carolina. Still, that the team has gone 14-1-4 in its last 19 games isn’t a fluke.

A lot of good things happened for the team throughout November. The club has jump-started its five-on-five play. Marner, as every Maple Leafs’ fan knows, is currently engaged in a consecutive game point-scoring streak that’s now up to 22 games. Matthews leads the Maple Leafs with 20 points produced over the past 14 games.

But the secondary impact on others is also being felt. Nylander has 17 goals, which puts him in a tie for ninth place in the NHL with such players as Sidney Crosby, Alex Ovechkin, and Kirill Kaprizov. That’s heady stuff. Nylander is also above a point-a-game pace, with 33 points in 29 games. He’s having a career season.

Tavares is just one point short of a point-a-game pace, with 13 goals and 15 assists in 29 games. Even better, the second line is much improved, as a result of Marner’s increased defensive responsibility. Both top lines have become more stable, more reliable, and more productive.

What the Maple Leafs’ Top Six Should Look Like

Even with the team’s current success, it doesn’t mean that improvements can’t be made. Specifically, finding the best left-winger for the second line remains a work in progress.

The first line works well with Michael Bunting at the left-wing position, Matthews at the center, and Nylander on the right wing. Since returning to the team’s first line, Bunting’s been on an assist binge. He scored his first goal in 12 games against the Calgary Flames, but before that, he had been on a seven-game, nine-assist streak. On the season, his scoring totals are now five goals and 15 assists (for 20 points). That’s not yet last season’s 63-point pace he set, but if he stays on that pace, he’ll get close.

But the second line’s left-wing position remains open. Oddly, perhaps the greatest success came with Calle Jarnkrok in that position. Jarnkrok sees the ice well, has a high hockey IQ, and is solid defensively. When he shoots (which I believe should be more often), he can score the puck well from the top of the face-off circles. He also has strong underlying analytics. His effectiveness as a 200-foot player helps make the second line more defensively effective.

With Jarnkrok now out with an injury, one person I’d love to see take a go at the left wing is Pierre Engvall. The speedy Engvall is an effective defender who could use his size to dig the pucks and to work the boards. Tavares’ net-front presence takes advantage of his great hand/eye coordination. And Marner’s always been solid at orchestrating the play on the ice.

Maple Leafs’ Need to Begin with the End in Mind

There are a number of reasons for keeping Matthews and Marner on separate lines playing five-on-five. First, playing the two together five-on-five has the potential to create more team success – especially during the postseason.

That’s really the issue this team faces. Thus far, it hasn’t won in the postseason. As a result, that should be the team’s starting point for “beginning with the end (postseason success) in mind.” (Stephen Covey’s second habit in his book, The Seven Habits of Highly Successful People.)

As can be seen during recent games, returning Marner and Matthews to the same line during a game can become an in-game, ad hoc decision. Coach Keefe can (and continues to do so) put Marner and Matthews together if he needs an offensive jump or in some offensive zone situations. There are also ample opportunities for Matthews and Marner to play serious minutes together on the power play.

Beginning with the end in mind suggests that splitting up Matthews and Marner could really be beneficial during the postseason. Given the Maple Leafs’ history of regular-season success and postseason failure, that option is at least worth a try; and, the regular season is exactly the time to try it.

The separation gives the team two productive lines and would create more difficult defensive assignments for playoff opponents. Team history shows that a Matthews and Nylander partnership can be strong. Currently, Matthews has lifted Nylander’s production; and, Marner has lifted Tavares’. In the past, Tavares’ had a career season with Marner on his right wing in his first season as a Maple Leafs’ player.

The move might have detrimental impacts on Matthews’ personal goal-scoring totals. That is, with Nylander on his right, Matthews might not hit the 60-goal mark again. He’s become more the passer and Nyander the finisher.

However,  Matthews is good enough to hit 50 goals without Marner feeding him the puck. In addition, the team could benefit in the long run by having two more balanced and productive top lines. That’s especially true during the postseason.