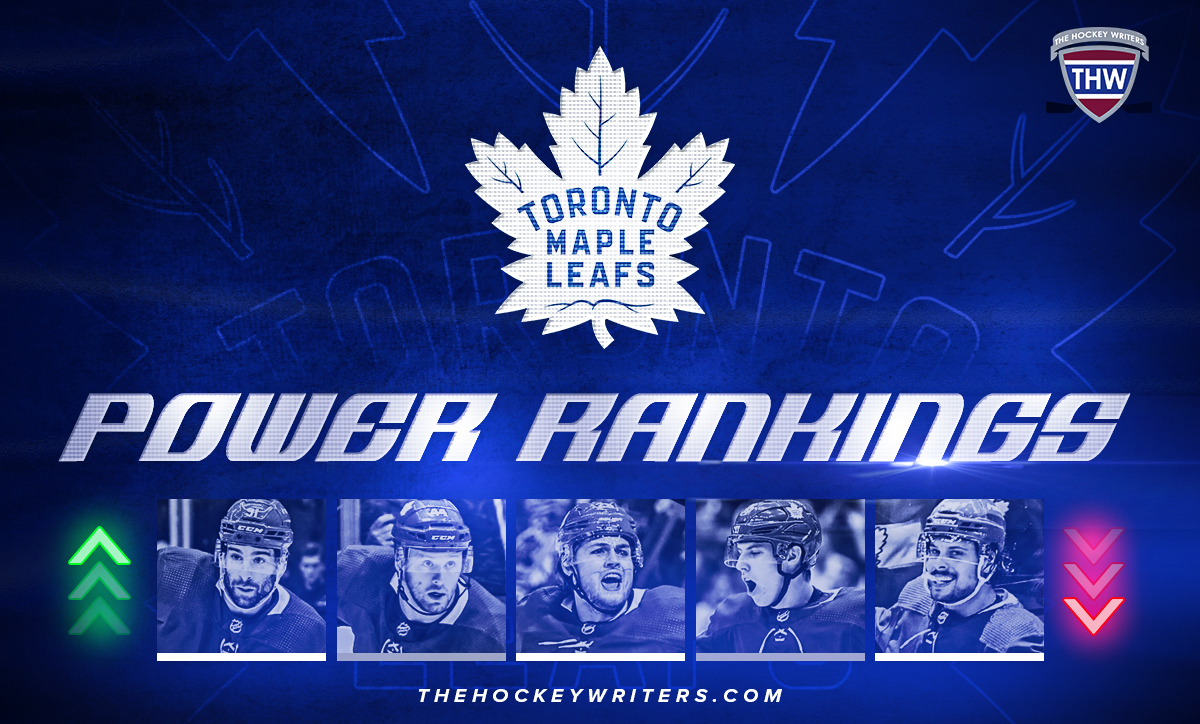 With the rocky start to the season for the Toronto Maple Leafs, there have been a number of players on the team who’ve carried their weight both offensively and defensively and some that have been underwhelming to start the year.

Different players have stepped into different roles and while head coach Sheldon Keefe tosses the lineup in the blender from time to time, there have been a number of standouts recently that seem to be eating up their opportunities for the Maple Leafs.

With that, here’s a look at our most recent venture surrounding the club, a weekly power rankings of the team’s top performers based on what they’ve provided the Maple Leafs.

Washed up and overpaid — that’s what the doubters were saying about John Tavares before the season even started. Fast forward to 20 games into the season and he’s been the most consistent Maple Leafs player to start the year.

He leads the Maple Leafs in goals and sits second on the team in points just one point back of Mitch Marner’s 23. He has 22 points in 20 games and is on pace for a career-year offensively. Most notably, however, might be his opening goal against the Penguins on Nov. 15 which gave the veteran his 400th career NHL goal.

He has four points in his last two games and over the past week has a win-loss record in the circle of 27-20 for a win percentage of 57.4 percent. He’s seen the lowest average ice-time this season of his career at just over 17 minutes per game and has got more involved physically with 11 hits over his last five games.

The production might drop off a bit, but Tavares has come to play this season and that’s quite evident thus far.

He’s had maybe one of the rockier starts to the season and, still, Marner leads the way for the Maple Leafs offensively with 23 points in 20 games to start the year.

The 25-year-old is on a 13-game point streak with three goals and 18 points over that span and has shown that he can play up and down the lineup with Keefe swapping the top two lines over the past few games.

Marner’s averaged just under 22 minutes per game this season which is second on the Maple Leafs behind only Morgan Rielly and while some of his passing decisions have been scrutinized, Marner has continued to produce at a top-end rate.

The one question mark is that following a year in which Marner suggested he wanted to shoot the puck more often, he’s on pace for just 172 shots after 224 last season — an average of just over two shots per game. That’s something he can work on moving forward.

This guy is going to get paid and there’s no question about it. In his 20 games this season, Nylander has made it look super easy getting up and down the ice and becoming the second Maple Leafs player with double-digit goals this season behind only Tavares.

Like Marner, Nylander has been juggled in the lineup a bit with a promotion to Matthews’ wing and it’s come with relatively consistent play. He’s adapted well to the move and continues to be a driving force for the Maple Leafs offence this season.

With 10 goals and 21 points this year, Nylander is also on pace for a career-year and continues to silence the doubters that he’s had early on in his career. He’s currently on a six-game point streak himself with five goals and eight points over that span and he could stay atop the Maple Leafs lineup if Keefe’s top two lines continue to produce at the clip they have.

Following an injury in preseason, Jordie Benn is finally getting his opportunity to suit up for the Maple Leafs with injuries to TJ Brodie, Jake Muzzin and now Rielly and it’s worked out so far for the burly blueliner.

The 35-year-old has suited up for the past five games and had a two-game point streak to start his Maple Leafs career. His first goal with the team came as the game-winner in a 3-2 win against the Canucks, with Benn also tallying an assist on the opening milestone Tavares goal the following contest against the Penguins.

While his skating might not be as graceful, Benn has looked like younger brother Jamie getting involved offensively to start his season. He’s averaged just over 18 minutes per game and has a Corsi For Percentage (CF%) of 50.3 percent while providing some tough defensive play within his own end.

His 18 hits and 13 blocked shots through five games has given the Maple Leafs more time to adjust to life without Muzzin and could force them to stay off the trade market other than their move on Nov. 23 to grab Conor Timmins.

Without him, the Maple Leafs would still be counting on Erik Källgren to tend the net. But returning from an injury early in the season, Matt Murray has impressed in his small sample with the Maple Leafs.

He’s 2-1-1 in four games to start the season with a 2.76 goals against average (GAA) and .913 save percentage (SV%) which are both better than his career averages. His best games this season came against his former club — the Penguins — where he stopped 35 of 37 shots and on Nov. 19 when he stopped 32 of 34 shots against a Buffalo Sabres team that always seems to have the Maple Leafs’ number.

While it’s still a small sample size, Murray has exceeded expectations so far for the Maple Leafs and assuming Ilya Samsonov returns at some point in the next week or so, this tandem could continue to push the boundaries in the Atlantic Division.

All things considered, the Maple Leafs are in a good spot nearing the end of November, but there are still areas of their game that they need to clean up — especially with the mounting injuries. That said, as new players step up, these rankings will change and your favourite Maple Leafs player could find his way into the Maple Leafs power rankings next time around.

Andrew is in his 8th year reporting for The Hockey Writers covering the Toronto Maple Leafs. He began his broadcasting with CBC’s Hockey Night in Canada team as well as being part of their coverage of the 2014 Winter Olympic Games in Sochi. He’s the former play-by-play voice of the London Jr. Knights for Rogers TV and currently hosts the Sticks in the 6ix podcast. You can follow him on Twitter at @AndrewGForbes.