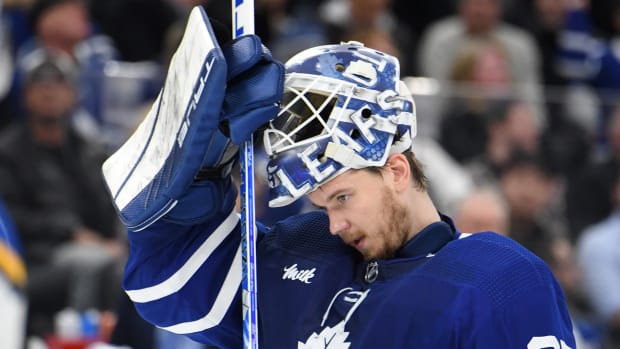 Ilya Samsonov tried to remain positive following his team’s 6-5 shootout loss to the St. Louis Blues on Tuesday. But it’s clear he hasn’t been happy with his game as of late.

“Tough game for me, again,” he said. “Last four games were tough for me. A lot of scores.”

After a hot start out of the gate this season, the Russian goaltender has posted a save percentage of .850 over his last four starts in goal. To his credit, Samsonov’s record is 2-1-1 during that stretch, but that provided little solace for a goaltender who signed a one-year, $1.8 million with the Toronto Maple Leafs this summer to prove himself in the NHL.

“It’s not reality right now. I believe [in] my skill,” Samsonov said after Tuesday’s game. “I believe in my mental spot. I didn’t see a problem with my [game] technically or physically. I feel pretty good today. But again, two bad bounces and maybe luck is show me ass right now. Yeah?

Apart from the game-opening goal in which Samsonov allowed a shorthanded tally at 4:52 of the opening period, Maple Leafs head coach Sheldon Keefe saw no particular issue with his goaltender’s game.

“Aside from that, I don’t know if there’s a lot he can do,” Keefe said of Samsonov. “We talked about it. When we play better as a team, everybody looks better and everybody is better. This is certainly not on the goaltending tonight.”

Samsonov’s teammate Matt Murray has also had his share of difficult starts. However, he has improved as of late. Murray made 26 saves on 28 shots in a 6-2 win against the Colorado Avalanche on Dec. 31 and had 18 saves in 19 shots against the Tampa Bay Lightning on Dec. 20.

The 25-year-old Samsonov is reaching a critical mark in his season. His next start will be crucial to proving to himself and others that his early-season success wasn’t an aberration.

“I know how I’m working with this. I believe [in] my teammates and believe in what I’m doing every day and will look to smile for the future.”