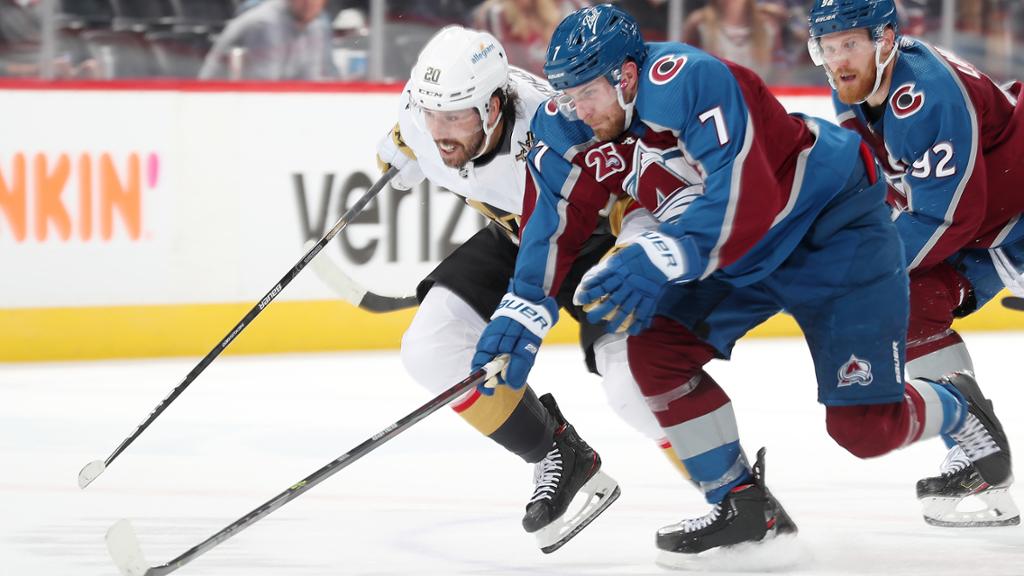 If you were to create a lineup of the players you find underappreciated, what would it look like? — @punmasterrifkin

I’ll give you a starting lineup instead of going deep into a 20-person lineup.

Wood’s speed and his ability to drive the net is a big part of why the New Jersey Devils can roll four lines that all do similar things. They want to play fast and that doesn’t mean by skating, though that helps. It’s about puck movement, getting the puck on and off sticks quickly, and funneling pucks to the scoring areas. Wood, who has 10 points (six goals, four assists) in 19 games, can move the puck quickly and he’s always funneling himself to the scoring areas. He played in three games last season because of a hip injury and the Devils were one of the worst teams in the NHL. He’s played in all 19 games this season and they’re one of the best teams. That’s not a coincidence.

Stephenson continues to play a key role for the Vegas Golden Knights despite remaining under the radar. He can center their first line or their fourth line and his game won’t change. He can play on the wing and his game won’t change. He had 64 points (21 goals, 43 assists) in 79 games last season and he has 19 points (six goals, 13 assists) in 20 games this season, yet when we talk about the Golden Knights he’s maybe the seventh or eighth player that gets mentioned.

All Rust does is win with the Pittsburgh Penguins. He’s a two-time Stanley Cup champion who regularly puts up points and can play on a line with either Sidney Crosby or Evgeni Malkin and adjust accordingly. His game is about speed. Like Stephenson he’s not on the tip of the tongue when you talk about the Penguins, but he’s again been a solid contributor this season with 10 points (five goals, five assists) in 19 games.

Toews and Pesce each is overshadowed on their respective teams but could be No. 1 defensemen on other teams. Toews, with the Colorado Avalanche, helped make Cale Makar a Norris Trophy winner last season. Makar is good enough to do it on his own, but Toews’ ability to handle the puck when Makar is under pressure and be the first man back when Makar is up the ice is a big reason why that pair might be the best in the NHL. Pesce’s calm demeanor is perfect for the Carolina Hurricanes. He won’t blow you away on the score sheet, but he’s a defenseman that does everything well. And he’s not a system defenseman; if given the green light more, Pesce could put up 40 points or more regularly.

Vejmelka’s numbers won’t put him up for any postseason awards, but he gives the Arizona Coyotes NHL-quality goaltending every time he’s in net. He’s played in 12 games, and in his 11 starts he has faced an average of 35.4 shots on goal and has a save percentage of .913. The Coyotes are 5-5-1, respectable all around. Vejmelka came to the Coyotes last season looking to battle for a spot with Tucson of the American Hockey League. This season, he’s playing on a three-year contract. He earned it.

The top 11 goal scorers have 11 or more at just about the quarter-point of the season. Who gets to 50? If we assume Connor McDavid, who else? Of that 11, who doesn’t get to 40? Have to assume Erik Karlsson doesn’t. — @martmonk

This question was sent to me Monday. As of Tuesday, there are 13 players with 11 goals or more.

Connor McDavid will score in the 50s, if not in the 60s, this season. The Edmonton Oilers center has 16 goals in 19 games, off the 50-in-50 pace but certainly 60 in 82 is within reason. Don’t sell the Oilers short on having two 50-goal scorers. Leon Draisaitl scored his 11th in 19 games Monday; the Oilers forward scored 55 goals last season. If he stays healthy, Colorado Avalanche forward Mikko Rantanen can be a 50-goal scorer, especially if he continues to play on a line with center Nathan MacKinnon. He has 11 goals in 17 games. David Pastrnak could do it too. The Boston Bruins right wing is a pure goal scorer and he has 12 in 19 games. I think Jason Robertson can do it too. The Dallas Stars forward has 14 goals in 19 games, a 60-goal pace. The Stars play a more up-tempo game under coach Peter DeBoer, and Robertson, who scored 41 in 74 games last season shooting 18.6 percent, benefits. He is shooting 18.2 percent this season.

Even though he has 15 goals in 19 games, a 64-goal pace, I wonder if regression is coming for Vancouver Canucks center Bo Horvat, who scored a personal NHL-best 31 goals last season, when he shot 16.0 percent and averaged 2.77 shots on goal per game. He’s shooting 22.4 percent this season and is averaging 3.53 shots on goal per game. His shooting percentage is more than nine percentage points higher than his average of 13.1 percent entering the season, and if that comes down so will his odds of scoring 40 despite a terrific start.

I’m also not sold on Carolina Hurricanes forward Andrei Svechnikov getting to 40 even though he has 13 in 19 games. He’s shooting 20.3 percent; he was a career 11.6 percent shooter entering the season. Similarly, Florida Panthers forward Carter Verhaeghe has 11 goals in 19 games, but he’s also shooting above his normal percentage (19.3 percent this season, 15.4 percent career prior to this season) while averaging 3.00 shots on goal per game, up from 1.91 in his first three NHL seasons. It could be one of those seasons for Verhaeghe, but like Svechnikov, the better bet is him scoring in the 30s. It’s the same for Canadiens forward Nick Suzuki, who has 11 goals in 18 games and is shooting a ridiculous 27.5 percent. That will fall; he was a career 11.3-percent shooter entering this season. And John Tavares (11 goals in 20 games) could come close to 40, but my bet is the Toronto Maple Leafs center hits the high 30s.

Karlsson won’t score 40. The San Jose Sharks defenseman is having a resurgent season, worthy so far of winning the Norris Trophy as the best defenseman in the NHL for a third time, but he won’t continue scoring goals at his current pace (11 in 21 games).

Is there any appetite in the NHL to change the offside reviews? I would think the more goals the better, and if the offside doesn’t impact the play or if the defensive team touches the puck in between the offside and the goal, that it should count. — @jreinitzesq

I don’t see the reviews for offside changing unless there is an appetite to change the way the offside rule is applied again. The NHL changed the application of the rule prior to the 2020-21 season to allow for a player to be deemed onside as long as his skate is hovering over the leading edge of the blue line. That change took years to make after many discussions at the general managers level.

Offside reviews take on a life of their own sometimes. But goals shouldn’t count if they’re scored illegally. I often hear people say, “We’re talking about centimeters here.” So what? If you’re a centimeter, an inch, a foot or a yard offside it doesn’t matter to me because you’re still offside. I often hear people say, “What if this happens in overtime of Game 7 of the Stanley Cup Final?” Imagine you’re the team that gives up the Stanley Cup-winning goal on a play where your opponent entered the zone illegally and you didn’t have a chance to challenge that goal. That’s why the offside review initiated by a coach’s challenge is in place, to get it right. We have the technology to do that, or at least come as close as possible, and it should be used.

I’m a big fan of the coach’s challenge. I get that people may not like it because it takes time, but video review is a part of pro sports now and it’s not going to change.

Have the Devils shown you enough yet? — @JonathanNJayne1

Yes. They’re legit. This isn’t a fluke. You don’t fluke your way to 13 straight wins. I wrote about the Devils here.

The best part about this winning streak for the Devils is they have controlled and dominated games. They’re not slipping by teams with overtime and/or shootout wins while getting outshot and outchanced every night. They’ve outscored their opponents 56-24. They’ve outshot their opponents 455-347. They’ve scored first in eight games. They’ve led for 450:34 and trailed for 61:36.

The Devils will lose at some point, but they know their game, they know how well they can play it, and that’s a comfortable blanket to fall back on when adversity inevitably strikes. All that will help them also when they get in the playoffs.