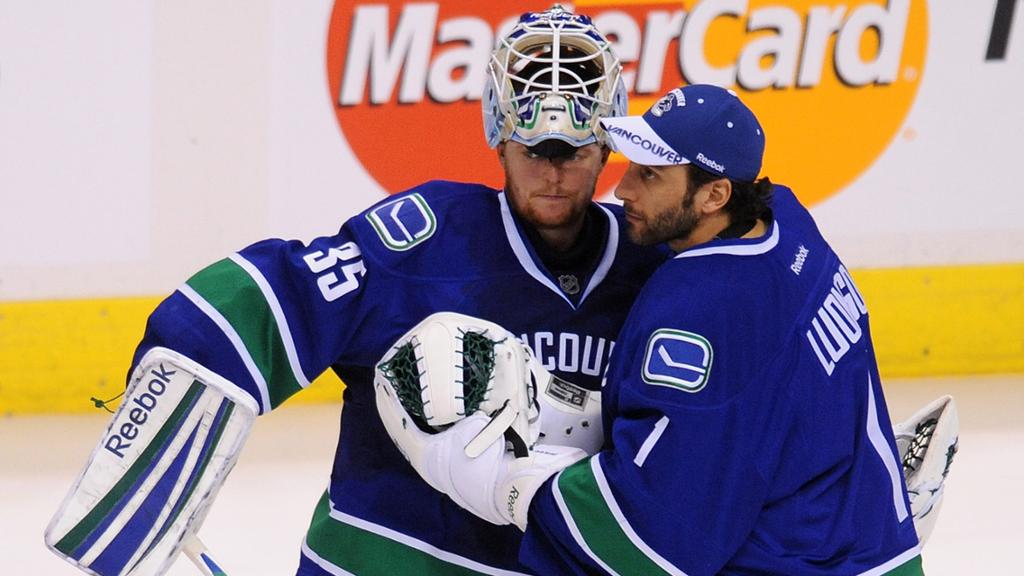 Cory Schneider has a unique perspective on Roberto Luongo’s Hockey Hall of Fame induction Monday. They were Vancouver Canucks goalies from 2008-13 and shared the Jennings Trophy in 2010-11, when Vancouver allowed the fewest goals (180) in the NHL. Luongo was a finalist for the Vezina Trophy that season, voted one of the top three goalies in the NHL for the third time. The Canucks won the Presidents’ Trophy as the NHL’s top regular-season team and came within a win of the Stanley Cup, losing to the Boston Bruins in seven games in the Stanley Cup Final. They won the Presidents’ Trophy again the following season.

Schneider, now playing in the New York Islanders organization, shares his thoughts on Luongo in a special testimonial for NHL.com:

I collected goalie posters growing up, and I had Roberto Luongo on my wall alongside guys like Martin Brodeur, Patrick Roy and Mike Richter. He was one of my favorites.

When the Vancouver Canucks acquired him from the Florida Panthers on June 23, 2006, I thought, “Oh, this is awesome.” I was at Boston College then, and the Canucks had taken me in the first round (No. 26) of the 2004 NHL Draft. Then I thought, “Wait. Roberto Luongo’s ahead of me in the organization, so that’s probably not a good thing for my career.” But as a hockey fan, it was a pretty cool experience.

I’m kind of a small Hall guy. I feel like you really must have separated yourself over an era of hockey to make the Hockey Hall of Fame. Roberto ranks second in games played (1,044), fourth in wins (489) and ninth in shutouts (77) among goalies in NHL history, and he’s tied for sixth in save percentage (.919) among goalies with at least 250 games. The numbers speak for themselves. You don’t have to argue against them; they’re there. I think it shows how well he played for a long period of time.

When you think of him as a person, player and icon, he had a distinct style. Goalies emulated him. I think he defined an era of goaltending for young guys like me. I think the butterfly had become popularized, but I think he really ushered in the next era of proficiency and perfection. He had these long arms and big hands and big feet. He was an immense presence physically at 6-foot-3, 215 pounds. He looked so big in the net.

But he made these incredibly flashy saves. He’d put a little extra mustard on the glove saves, or he’d reach back with his paddle to knock the puck out of the air. For a guy who wasn’t known necessarily for his flexibility, he made pretty incredible contorting saves.

He had that knack. He was a strong positional goalie, so it wasn’t like he was Dominik Hasek, unorthodox, but it spoke to his competitiveness that he did whatever he could to make the save. I remember the play-by-play calls. “Roberto Luongo!” You’d see him on the highlights all the time. That’s what you picture when you think of him playing.

I wouldn’t change a thing in terms of going to Vancouver and playing on those teams and learning from Roberto, because I think it really did help me take the next step in my career. I learned a lot.

It’s easy to be intimidated as a young guy playing with him. I think the hardest part is the guys on the team expect a certain level when he’s in net, and when you come in, you’re expected to replicate that. It’s like, “Hey, we’ve got Roberto here. Don’t screw it up, Cory.” He set the standard. I think when you get used to that or accept that, it pushes you. He worked harder than anybody in practice, so I knew if I ever was going to play, I had to work as hard, if not harder. I think that realization helped push me forward too.

He couldn’t have been nicer off the ice. He was coming into his own in terms handling the media and the pressure of Vancouver, becoming that self-deprecating, sneaky-funny guy everyone’s gotten to know through Twitter over the years, but you could see it in the locker room. He was always gracious to me. He never viewed me as a threat or a nuisance or a waste of time. He was always willing to help me out. We ended up having a great working relationship.

You need 25 games to be eligible for the Jennings, and it looked like I’d be one game short in 2010-11. Roberto came out in the last minute of a game late in the season, because he wanted me to get the Jennings with him. I think that shows how selfless he was, how little he cared about individual accolades. He was more happy for me and the team. I feel like there aren’t many guys of his stature and profile who would have willingly offered to do that. I’ll always be grateful to him.

I started the last game. We had to give up six or fewer to secure the Jennings. He gave me a quick, like, “Don’t screw this up.” He was joking around with me, laughing, then looked at me, like, “But, seriously, don’t give up six goals.” I was like, “Yep. You got it.”