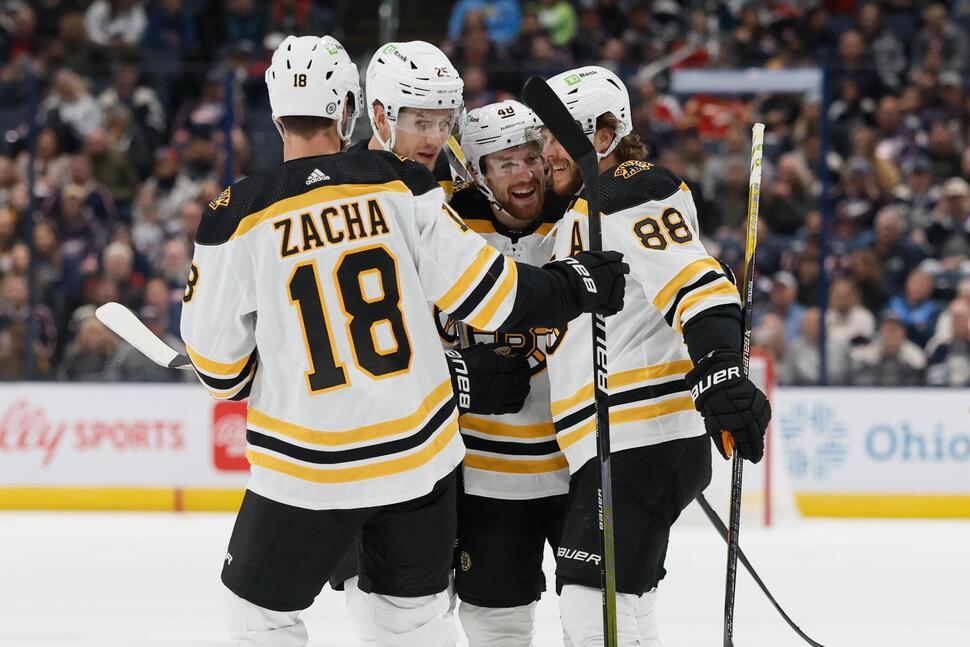 “There are a lot of guys wearing ice bags right now, and that shows you their commitment early on in the year,” Bruins coach Jim Montgomery said. “They are playing hard for each other and we’re getting good results.”

Elvis Merzlikins stopped 25 shots for the Blue Jackets before being replaced in the third period by Daniil Tarasov, who stopped six. Columbus has lost three straight at home and six of its first nine games.

The Bruins struck at 8:43 of the opening period when Grzelcyk rifled his first goal of the season from the top of the left circle over Merzlikins’ glove.

Columbus set a record for futility in the second period with its 22nd power-play without a goal. Coyle added to those woes by notching a short-handed score at 4:30, the second given up by the Blue Jackets this season.

“It’s hard when you’re chasing the game,” Blue Jackets coach Brad Larsen said. “It’s draining. You can see in our guys. Then you start pressing you’re doing things you shouldn’t be doing.”

DeBrusk made it 3-0 after he blocked a shot that led to a breakaway score at 15:07, and Pastrnak added a goal with 26 seconds left in the second period off a wrister from the left circle.

Pastrnak extended his scoring streak to four games and put him atop the NHL leaderboard with 16 points. He is second in the league with seven goals.

“It’s a great start,” Coyle said. “I don’t know if a lot of people expected us to have the record that we have now, but it doesn’t matter. We know what’s in here, and the guys we have, and the guys that can fill in and take on responsibility. It’s a great sign for a team with a few key guys out.”

With his assist on Pastrnak’s goal, Patrice Bergeron extended his points streak to three games (1-2-3). He has nine points in nine games.

The Bruins were without center David Krejci who left Thursday game against Detroit with an upper-body injury and did not return. Brad Marchand, who is being managed in his return from offseason double hip surgery, also did not play. Columbus played without Jake Bean, who was out with an illness and Adam Boqvist, who suffered a broken foot Tuesday and is expected to miss six weeks. Nick Blankenburg is also expected out several weeks with an injured elbow.

David Jiricek, the sixth overall pick in the 2022 draft, made his NHL debut for Columbus, playing 14:38 and recording one shot on goal. At 18 years, 334 days old, he is the second youngest defenseman in Blue Jackets history behind Rostislav Klesla (18 years, 200 days). Before he was called up, the native of Czechia led AHL rookie blueliners in assists and was tied for points (0-4-4). Jiricek is the third pick from the 2022 draft to play in the NHL, joining No. 1 pick Juraj Slafkovsky and No. 4 pick Shane Wright.

The Bruins made a trade in the middle of their Thursday game against Detroit, picking up goalie Michael DiPietro and the rights to defenseman Jonathan Myrenberg from the Vancouver Canucks in exchange for forward Jack Studnicka.

The Blue Jackets went 0 for 3 on power-play, making them 0-for-23 to start the season. That is the franchise record for the longest stretch without a power-play goal.

The game was Columbus’ last at home before they travel to Nokia Arena in Tampere, Finland, and face the Colorado Avalanche Nov. 4 and 5, as part of the 2022 NHL Global Series. Columbus will head to Helsinki following its Sunday contest at New Jersey. The team has several Finns on the club: General Manager Jarmo Kekalainen is a native of Kuopio, Finland and the NHL’s first European-born general manager; winger Patrik Laine is from Tampere; and goaltender Joonas Korpisalo is from Helsinki.

Boston: At Pittsburgh on Tuesday night.

Columbus: At New Jersey on Sunday.

Copyright 2022 The Associated Press. All rights reserved. This material may not be published, broadcast, rewritten or redistributed.