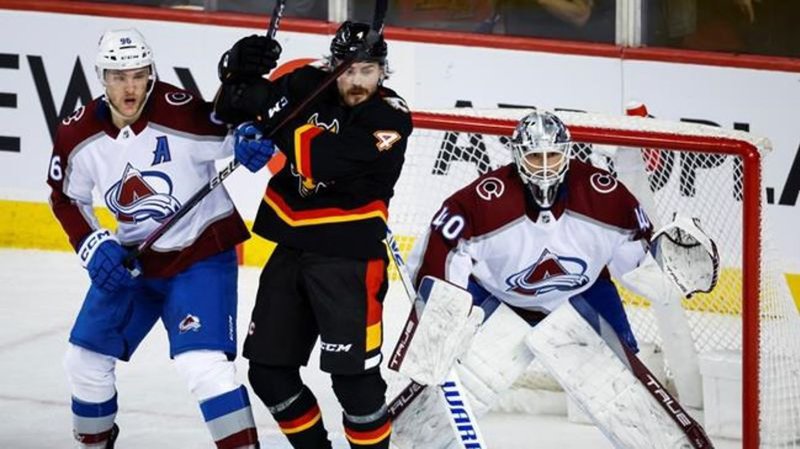 Alexandar Georgiev made 34 stops to earn the victory and improve to 17-11-3.

The Avalanche took control of the game early, jumping out to a 3-0 lead after the opening 20 minutes.

The troubles for the home team began 6:17 into the first period when a defensive zone turnover led to J.T. Compher setting up Rantanen for a one-timer that went inside the goalpost.

Another miscue led to a second goal from the visitors. An errant pass after winning an offensive zone faceoff resulted in a 2-on-1 rush for Colorado in which MacKinnon set up Lehkonen at 11:01.

Less than two minutes later, Lehkonen netted his second of the night and fifth in his last three games. Rantanen’s point shot whistled wide of the Calgary net, but the rebound off the end boards popped out to the other side and Lehkonen buried it over Markstrom as he slid across.

After a scoreless second period, the Flames broke Georgiev’s shutout bid on a power play 2:27 into the third. Toffoli sent a shot inside the goalpost for his 16th of the season.

Calgary had a few chances to draw within one. Blake Coleman was denied on a couple of whacks on a loose puck in a scramble halfway through the third.

On his next shift, Coleman had another dangerous chance as he sliced his way through the Avs defence and in on goal, but was thwarted by Georgiev once again.

Rantanen put the game away with an empty-net goal as 58 seconds remained.

Colorado was without reigning Norris Trophy winner Cale Makar, who was held out of the lineup against his hometown team due to an undisclosed injury. He’s listed as day-to-day. It’s the first game Makar has missed this season as he ends up having his six-game point streak snapped. The 24-year-old leads the NHL in average ice time (27:09).

Rantanen’s opening goal was his 30th of the season, giving him three consecutive 30-plus goal seasons and four for his career. He’s also the fastest to reach 30-goal mark since the franchise relocated to Colorado (43 games). Joe Sakic had done it in 44 games in 1995-96.

Avalanche: Head to Vancouver for a date with the Canucks on Friday.

Flames: Play host to the Tampa Bay Lightning on Saturday.

This report by The Canadian Press was first published Jan. 18, 2023.