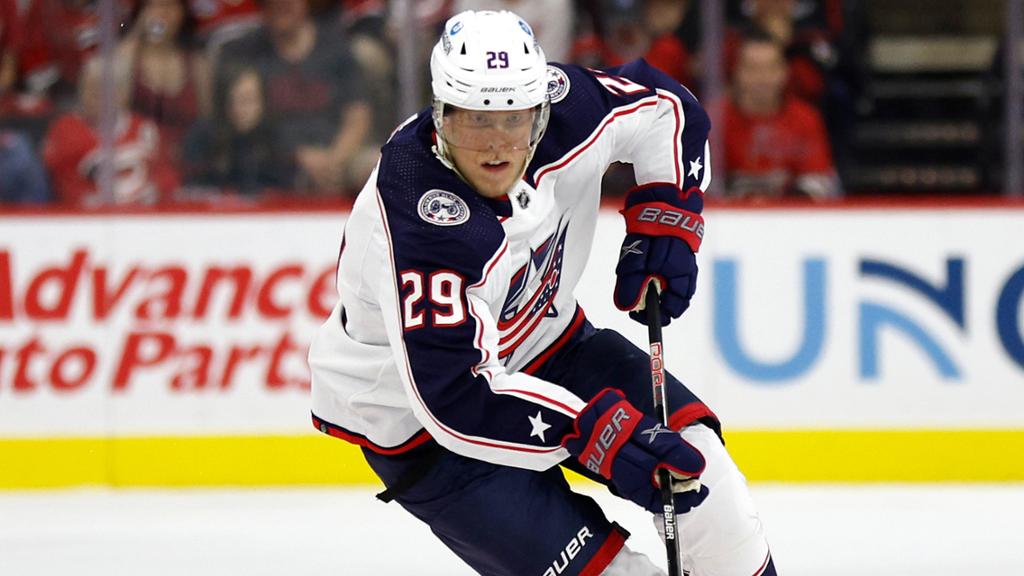 Patrik Laine is expected to be out 3-4 weeks for the Columbus Blue Jackets with an elbow sprain.

The forward was injured in a 4-1 season-opening loss to the Carolina Hurricanes on Wednesday when his right arm appeared to get sandwiched between Hurricanes defenseman Brett Pesce and the end boards, bending awkwardly at the elbow. He finished his shift with 13:15 remaining in the second period, came back to the bench and was examined by a trainer before heading to the dressing room.

Laine scored 11 seconds into the period, had two shots on goal and played 7:49. He was playing on the top line with new teammate Johnny Gaudreau and center Boone Jenner.

“It changes the lineup completely,” Gaudreau said Friday before Columbus lost 5-2 to the Tampa Bay Lightning. “Losing a player of that type of skill level definitely hurts your line, your team. The next guy fills in and being the top line, we need to make sure we produce. It’s tough but we need to get this thing going here. We can’t wait for Patty to come back in three or four weeks.”

Laine was second on Columbus with 26 goals in 56 games last season behind Oliver Bjorkstrand (28) and has 328 points (177 goals, 151 assists) in 408 NHL games with the Blue Jackets and Winnipeg Jets.

The time frame for his recovery means Laine could miss the 2022 NHL Global Series on Nov. 4-5 in his hometown of Tampere, Finland, where the Blue Jackets will play two games against the Colorado Avalanche.

“We need to make sure we are playing hard winning, winning games,” Gaudreau said. “With Patty out of the lineup it definitely hurts us but there are still a lot of really talented and smart players here that are capable of helping us win games.”

Justin Danforth replaced Laine on the top line Friday and assisted on Gaudreau’s goal. He was held without a point Saturday.

“[Danforth] is just a relentless competitor,” Blue Jackets coach Brad Larsen said. “I don’t think he gets enough credit for his offensive ability because of the way he had to get into the lineup. … We’ll see how it goes and we’ll go from there.”

Danforth had 14 points (10 goals, four assists) in 45 games last season as a rookie.

“I came into camp and worked really hard and was ready to play this year and I learned a lot from last year so I think it’s a great opportunity,” he said.

Columbus recalled center Kent Johnson, the No. 5 pick in the 2021 NHL Draft, from Cleveland of the American Hockey League on Thursday. He replaced Laine in the lineup against Tampa Bay, playing on the third line and getting an assist. He did not have a point Saturday.

“Next man up,” Larsen said. “I think ‘KJ’ is excited. That’s what happens, somebody goes out, new opportunity.”