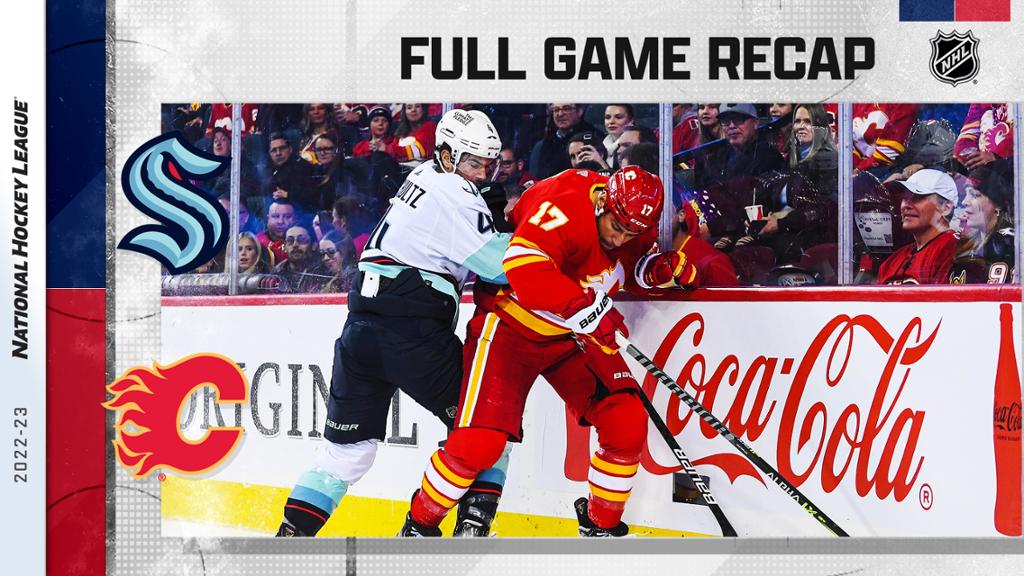 CALGARY — Matty Beniers scored with 6:34 left in the third period, and the Seattle Kraken rallied from a two-goal deficit to defeat the Calgary Flames 5-4 at Scotiabank Saddledome on Tuesday.

Daniel Sprong and Yanni Gourde scored, and Oliver Bjorkstrand had two assists for the Kraken (5-4-2), who have won three of their past four games. Joey Daccord made 36 saves in his first start of the season.

“It was real impressive the way we handled adversity in this game, the ups and downs,” Gourde said. “We trusted the game plan and we stuck to it, and we made it happen.”

Tyler Toffoli had a goal and an assist, Nazem Kadri scored, and Elias Lindholm had two assists for the Flames (5-3-0), who have lost two in a row. Dan Vladar made 21 saves.

“At the end of the day, you have to be accountable,” Kadri said. “You own it, you fix it, you watch the film. You try to improve. That’s the name of the game. That’s how the NHL works. It’s a fast game out there. Not every single time it’s going to go exactly the way you drew it up. You’d like to execute, but we’re going to clean that up and that’s certainly something we’re capable of.”

Beniers scored his first NHL game-winning goal when he took a feed from Jordan Eberle and shot over a sprawling Vladar to make it 5-4 at 13:26 of the third.

“I was fired up,” Beniers said. “I was smiling skating down the ice because you know [Eberle’s] dangerous with the puck, whatever he’s going to do. He ended up making a perfect play and gave me a wide-open net on the back side. That was great.”

His goal came after Sprong made it 4-3 at 8:31 with a one-timer on a power play off a pass from Alex Wennberg, and Gourde tied it 4-4 at 11:26 with a short-handed goal after he stripped Kadri at the Flames blue line and scored on a breakaway.

It was the second straight game Calgary gave up a lead in the third following a 3-2 loss here to the Edmonton Oilers on Saturday.

“We’re not a young group of players. We’re definitely one of the oldest and (most) experienced in the League,” Flames defenseman Nikita Zadorov said. “It’s definitely not acceptable for us. It can happen to young teams, but it cannot happen to us. It’s definitely on all of us. We made individual mental mistakes on the ice in crucial minutes, and it cost us the game.”

Carson Soucy put Seattle up 1-0 at 14:58 of the first period when he shot over Vladar’s glove from just inside the left face-off circle off the rush.

Zadorov tied it 1-1 at 6:28 of the second period after corralling a cross-ice pass from Toffoli, and Kadri scored on a second-chance effort from the edge of the crease at 8:14 to give Calgary a 2-1 lead.

Toffoli put the Flames back in front 3-2 at 1:34 of the third period, and Trevor Lewis shot by Daccord’s blocker from inside the right circle to extend it to 4-2 at 1:51.

“Yeah, it wasn’t great,” Beniers said. “We probably would’ve liked to not give up two goals. I think we took a timeout and we kind of banded back together and were like ‘all right we’ve got this, lets calm down, it’s not over yet, we’ve got 18 minutes left.’ Slowly but surely, we got one, and then ‘Gourdo’ made a great play on the PK [and] got another one and we were able to finish it. It was good.”

NOTES: The win is Seattle’s first against Calgary, which was 4-0-0 last season. … Kraken goalie Christopher Gibson, who signed a one-year, two-way contract Thursday, was recalled before the game from Coachella Valley of the American Hockey League to serve as the backup. Martin Jones is out due to a family matter. … Beniers has five points (four goals, one assist) during a five-game point streak, and leads all rookies with nine points (five goals, four assists). … Flames forward Brett Ritchie has four points (two goals, two assists) during four-game point streak. … Toffoli’s two points give him 400 (197 goals, 203 assists) in 658 NHL games. … Daccord won his first game with Seattle after going 0-4-0 last season in five games (four starts).