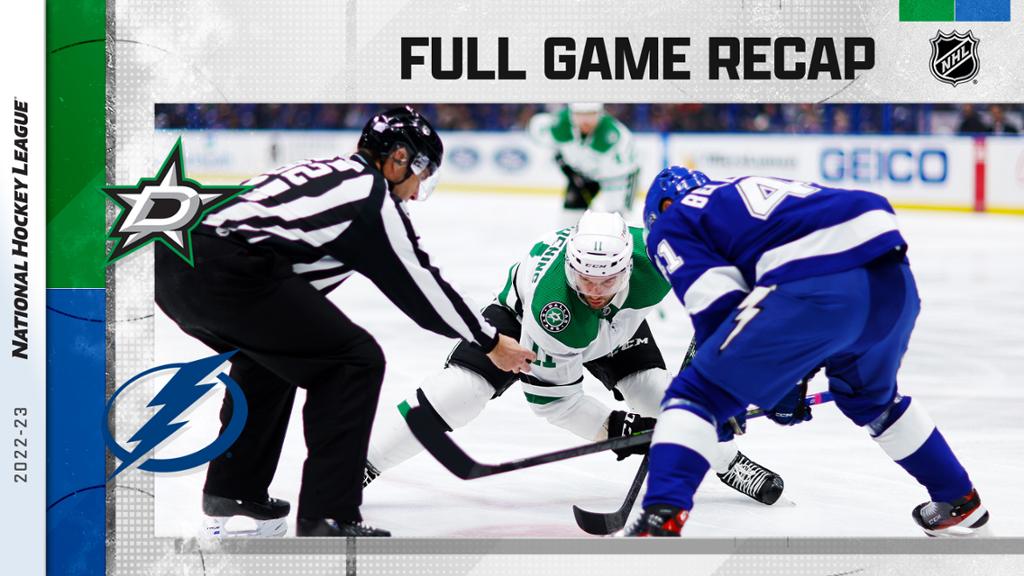 TAMPA — Alex Killorn scored at 3:43 of overtime, and the Tampa Bay Lightning recovered for a 5-4 win against the Dallas Stars at Amalie Arena on Tuesday.

Killorn, who had three points, scored from the slot after a pass by Steven Stamkos for his 500th NHL assist.

“Big goal for our team,” Stamkos said. “To do it on an overtime goal that helps the team win is probably as good as it’s going to get.”

Stamkos, Nicholas Paul, Ross Colton and Ian Cole each had a goal and an assist for the Lightning (9-6-1). Brian Elliott made 28 saves.

“I think we’re still finding ourselves, but with every game guys are getting more comfortable with each other,” Tampa Bay coach Jon Cooper said. “We’re making strides. I thought this was a really good test. Dallas has beaten a lot of good teams.”

Joe Pavelski and Jason Robertson each had a goal and an assist, and Miro Heiskanen had two assists for the Stars (9-5-2). Jake Oettinger made 33 saves.

“Big point on the road against a real good team,” Dallas coach Peter DeBoer said. “They’re not all going to look great or be perfect games. That game went back and forth three or four times, so it was a good point.”

Colton gave Tampa Bay a 1-0 lead at 1:20 of the first period when he stuffed in a rebound of a shot from Vladislav Namestnikov.

Mason Marchment tied it 1-1 with a power-play goal at 14:45 when he redirected a shot from Robertson.

“I just got a little contact on [the puck] and tried to change the angle,” Marchment said. “I thought we battled hard tonight. If we stayed out of the box tonight, we would’ve had a really good chance to win that game.”

Paul put the Lightning ahead 2-1 at 4:47 of the second period when he beat Hintz to the puck and scored from the slot.

“We were pushing through the middle, winning second battles, coming out of the corners and getting looks,” Paul said. “When you get pucks to the net and are winning battles, things open up.”

Robertson gave Dallas a 3-2 lead at 9:57 with a shot from the slot off a pass from Pavelski.

“It was one of our closer games, most of our wins have been by a lot,” Roberson said. “It’s our second game of the year in overtime. We had a lot of chances in overtime, but you can’t get beaten up the ice.”

Cole’s first goal with the Lightning gave them a 4-3 lead at 3:55 of the third period when he slipped the puck past Oettinger from close range.

“I saw [Victor Hedman] winding up for a [one timer], so I figured I wasn’t getting the puck up high,” Cole said. “Just had a little bit of space, he kind of slid, I saw guys coming to the far post … [I] just tried to tuck it quick, and it worked.”

Radek Faksa tied it 4-4 with a short-handed goal at 15:18 after Mikhail Sergachev turned the puck over in the defensive zone.

“We were resilient, went down 4-3 late in the third and there wasn’t any panic on the bench,” DeBoer said. “Guys were sticking with it. We needed someone to step up with a big goal and Radek did.”

“For a guy that a lot of people think is just a shooter, I’ll rub that in their face a little bit,” Stamkos said. “I’ve played for a long time and played with some really amazing players. I’ve had a lot of great memories in this league, and hopefully many more.”

NOTES: Stars center Ty Dellandrea left the game at 4:44 of the third period after taking a one-timer off his knee. DeBoer said he was getting X-rays. … Lightning forward Corey Perry had an assist for his first point in 10 games. … Pavelski scored his 430th NHL goal and moved past Bill Guerin for eighth all-time among U.S.-born players. … Stamkos scored his first goal in 11 games.