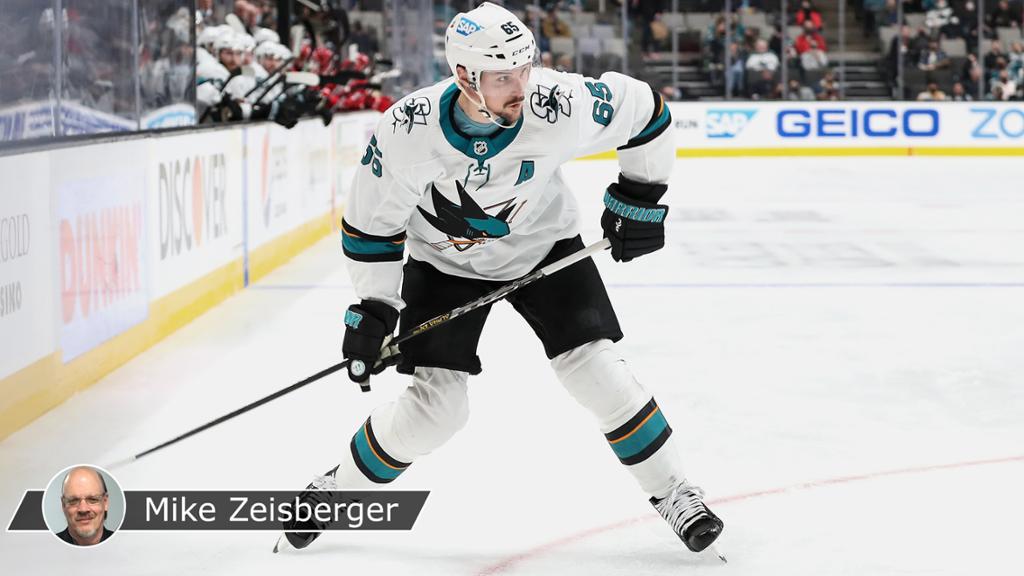 The San Jose Sharks defenseman is on pace for what would be the best statistical season of his NHL career and is among the early frontrunners for the Norris Trophy, the award he won in 2012 and 2015 when voted as the League’s top defenseman. The 32-year-old leads NHL defensemen with 32 points (11 goals, 21 assists) in 26 games and is on pace to finish with 100 points.

What’s been the key to his resurgence? Why has he been able to reach these heights again after struggling (at least by his standards) for the past several seasons?

When asked those questions by NHL.com while walking to the Sharks bus after a 3-1 loss to the Toronto Maple Leafs at Scotiabank Arena on Wednesday, he broke into a wry smile.

It’s the way we’ve all seen him play before, especially during his days with the Ottawa Senators. Karlsson played his first nine NHL seasons in Canada’s capital city, won the Norris Trophy twice and had an NHL career-high 82 points (16 goals, 66 assists) in 2015-16.

“Physically, I’m in a good place where I think I can still do the things I did in my 20s,” Karlsson said.

It’s been a rocky journey back to this point due to a variety of injuries. When asked how he’s been able to overcome them, he chuckled.

“If I knew, I’d would have done it sooner,” he said. “I’ve been feeling good for a while now, and obviously it’s clicking now a little bit more.”

It’s about time, given what he’s been through.

Last season, he had surgery for a muscle tear in his forearm. That came on the heels of a broken thumb in 2020-2021.

In 2017, doctors removed part of his ankle and replaced it with an artificial tendon, a procedure that affected his skating. Keep in mind too that his Achilles tendon had been sliced by the skate of Matt Cooke of the Pittsburgh Penguins in 2013, an accident that left concerns about his ability to skate with the same fluidity again.

With Karlsson one season away from unrestricted free agency, the Senators traded him and forward Francis Perron to the Sharks on Sept. 13, 2018, for forwards Chris Tierney and Rudolfs Balcers, defenseman Dylan DeMelo, the rights to unsigned forward Joshua Norris, a first-round pick in the 2020 NHL Draft (forward Tim Stutzle), a second-round pick in the 2019 draft and two conditional draft picks.

But now healthy, he’s on pace to become the first NHL defenseman to have 100 points in a season since Brian Leetch had 102 with the New York Rangers in 1991-92.

First-year Sharks coach David Quinn understands the beating Karlsson’s body has taken over the years but said he seems to be in prime health these days.

“I think Erik is in a different point in his career,” Quinn said. “He’s 32, and it’s been a frustrating three years for him for a variety of reasons.

“I had a good feeling coming into camp he was in a different mindset, namely because of his health. He was excited about the year, he was taking on new responsibilities, mainly for the way the roster has taken shape here the last three or four months. He’s embraced it, and you’re seeing a Norris Trophy-winning defenseman again.”

Sharks captain Logan Couture has been impressed by what he’s seen.

“Everyone gets injured in this game,” Couture said. “It’s a physical sport. It’s a grueling season.

“He’s worked extremely hard to get himself ready for this season. I don’t know if it’s revenge against anything. I think it’s just a proud player wanting to show himself and teammates that he can be a dominant player in the League, and that’s what he’s doing.”

With the Sharks (8-14-4) in full rebuild mode, first-year general manager Mike Grier has said he’ll listen to trade offers for Karlsson, who has four seasons remaining after this one on a contract that expires when he’s 37 and has a no-trade clause.

Karlsson said he’ll leave the business details to the front office. For the immediate future, he says he’s happy in San Jose. Either way, wherever he ends up playing, his legacy will be determined by his ability to stay healthy.

Can he do that for the remainder of his deal?

“If I had answers to those questions, it’s something that I would have done every year and every summer,” Karlsson said. “It’s a reaction sport. I find that the more you try to control it, the less you do.

“I had a good summer this year. I went back to Sweden, I got to see my family that I haven’t seen in a while. I got to bring my kids there.

“My life in general is just very good right now. I’m in a good routine. Maybe that’s done me good.”