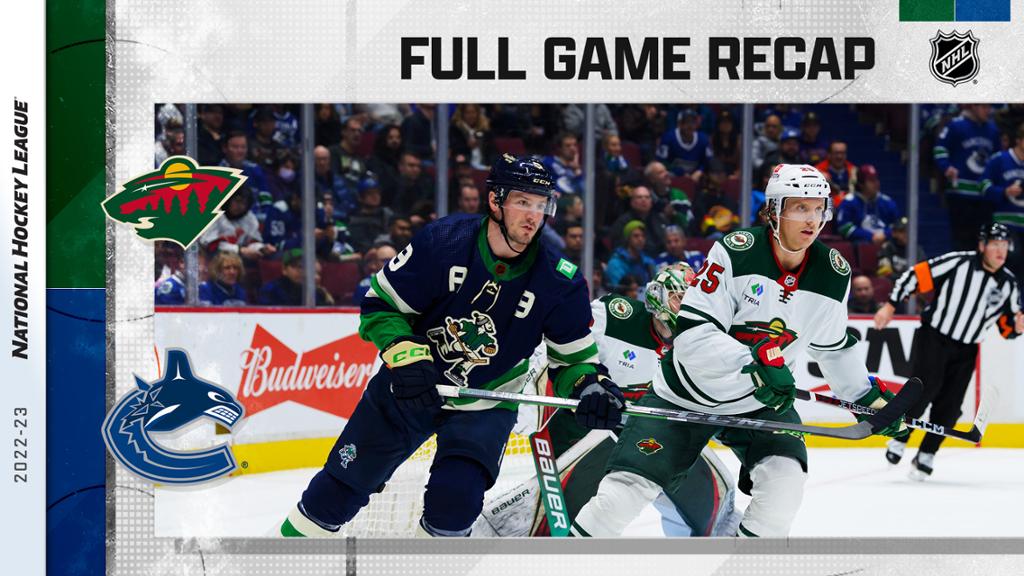 VANCOUVER — Kirill Kaprizov had his Minnesota Wild record point streak end at 14 games in a 3-0 win against the Vancouver Canucks at Rogers Arena on Saturday.

It was the first time since Nov. 8 that Kaprizov failed to get a point, but it didn’t hurt the Wild, who got a goal at even strength, one on the penalty kill and one on the power play to end a two-game skid.

Filip Gustavsson made 35 saves for his first NHL shutout, and Mats Zuccarello had two assists for the Wild (14-11-2), who were coming off a 5-2 loss at the Edmonton Oilers on Friday and playing their third game in four nights.

“A relief,” Gustavsson said. “It’s been close. It was close my first ever game, lost it with five minutes left, and then I had a pretty close one this year with [the] San Jose [Sharks], where I screwed it up a little bit by myself there at the end. So, finally.”

Video: [email protected]: Gustavsson stops all 35 shot in a 3-0 win

Spencer Martin made 30 saves for the Canucks (12-13-3), who were trying to win four straight games for the first time this season.

“Another opportunity we didn’t take advantage of,” coach Bruce Boudreau said. “I don’t know why we came out of the gate slow. We should have been ready to pounce. They played last night and we didn’t and we let them come to us.”

The Wild outshot the Canucks 14-4 in the first period, forcing Martin to make several tough saves before Matt Boldy made it 1-0 on a power play at 16:43. Zuccarello’s shot through traffic bounced off Martin’s left pad to Boldy alone at the bottom of the face-off circle, and he shot into the open net before the goalie could get back across.

“[Zuccarello] found a lane, got it down to the net and it just kind of squirted right to me and I put it in; pretty simple,” Boldy said. “Getting that win was big for us just momentum-wise and kind of getting our heads back in the right space.”

The Canucks outshot the Wild 19-7 in the second period but couldn’t score despite three straight power plays in the second half of the period, with Gustavsson making his best save on a Bo Horvat deflection at 13:38.

Connor Dewar made it 2-0 on a short-handed breakaway at 16:08 after intercepting a cross-ice J.T. Miller pass inside the Wild blue line. Dewar scored on a high, blocker-side slap shot from inside the top of the left face-off circle for his third short-handed goal of the season, tying him for the NHL lead with Reilly Smith of the Vegas Golden Knights.

“He’s really fast out there and shooters shoot,” Gustavsson said. “It looks good.”

It’s the second short-handed breakaway the Canucks surrendered in the period, Martin stopped Joel Eriksson Ek on the first, and the fifth short-handed goal they have surrendered this season, second most in the NHL to the Tampa Bay Lightning (six).

“It was a mistake,” Miller said of his turnover. “They scored on it. It was obviously not good. I’d like to score and get momentum for the team. We didn’t. It was a big moment of the game.”

Sam Steel made it 3-0 at 8:51 of the third period with a high backhand from the right hash mark.

Gustavsson stretched out with his right pad to deny Ilya Mikheyev on a rebound chance in tight at 11:45 to preserve his first shutout in his 37th NHL game.

“I tried to be patient first on that and then the rebound popped out there to the right and usually the pucks kind of stay low on those rebounds, so I just tried to slide there as fast as I could and I was there in time,” Gustavsson said.

It was just the second shutout of the season for the Wild, who had given up 15 goals in the previous three games and failed to keep an opponent under three goals in seven straight games.

“We talked today about how many goals we’ve given up,” Evason said. “It obviously starts with your goaltender. ‘Gus’ played great and then our defense was real good about clearing those pucks, and we blocked a lot of shots too.”

NOTES: Zuccarello has eight points (two goals, six assists) in a six-game point streak. … Wild forward Samuel Walker played 9:54 on 12 shifts in his NHL debut after being called up from Iowa of the American Hockey League on Friday and drew the penalty that led to Boldy’s power-play goal. … Minnesota forward Marcus Foligno played his 700th NHL game. … Horvat played his 600th NHL game.