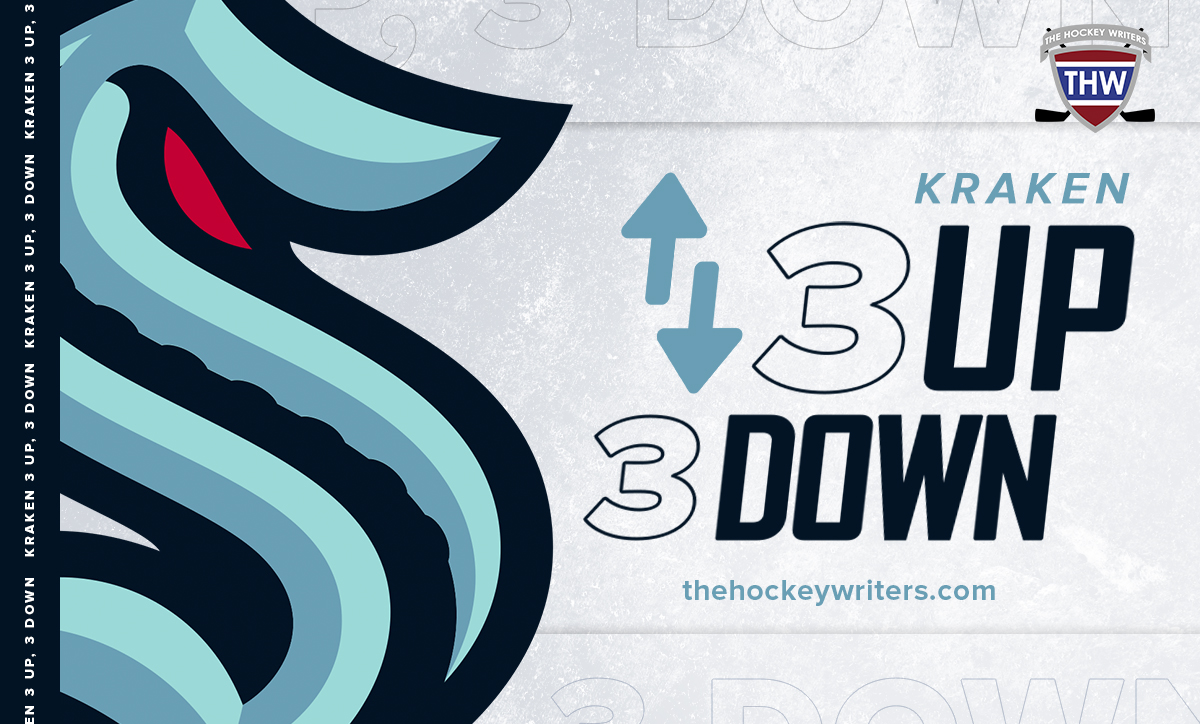 Welcome to this edition of our Seattle Kraken 3 Ups, 3 Downs column. In this series, we look at some of the highs and lows of Seattle’s recent play. From the play of prospects to storylines surrounding the NHL franchise, The Hockey Writers is your go-to place for all things Kraken.

The Kraken have started the season strong, but that doesn’t mean everything is peachy in Seattle. In this edition, we look at the Shane Wright situation and a trend that should make the Kraken organization nervous. That being said, there are plenty of positives, including the recent emergence of an unexpected goaltender and which bottom-six players are stepping up.

Plus One: The Emergence of Martin Jones

In the absence of Philipp Grubauer, Martin Jones has stepped up and has been a major factor in the Kraken’s 8-5-3 start. In 35 games with the Philadelphia Flyers last season, he finished with a 12-18-3 record, a .900% save percentage (SV%), a goals-against average (GAA) of 3.42 and zero shutouts. Through his first 12 games this season, he already has seven wins, a shutout and carries a .909% SV% and a GAA of 2.38. The move back to the West Coast has done wonders as he looks to have refound his early career form.

Related: Kraken Should Be Concerned With Grubauer’s Early Struggles

There are a few factors that have played into his strong performance, but the main difference is he is facing fewer shots. With the Flyers last season, he faced an average of 32.6 shots per game, while with the Kraken, that number is 23.8. Regardless, he looks more comfortable in the net and has been rock solid when Seattle is holding the lead. His play has been so good that even when Grubauer is back, the Kraken would be wise to give the Jones the bulk of the starts moving forward.

Minus One: The Shane Wright Situation

Kraken fans are probably tired of hearing about Shane Wright, but until Seattle figures out a plan, it will continue to be discussed. At this point, the Kraken have only played the 2022 fourth-round pick seven times in their first 16 games, so it begs the question, why is he still with the team? While some may argue there is value to keeping him in the NHL, actually playing games is arguably better for his development. It is a frustrating situation to watch play out and could affect his career with Seattle in the future.

In short, Wright needs to be playing and given opportunities to succeed. This is a prospect who already missed an entire year of development because of the pandemic, so having him in the press box rather than dominating the Ontario Hockey League (OHL) is baffling. Having him at practice is nice, but it is nowhere close to the lessons he would learn from actually participating in games.

Plus One: Brandon Tanev Steps Up

After missing more than half of last season due to injury, Brandon Tanev has exploded out of the gate with 10 points in 16 games. Not only is he the team leader in even strength points, but he is also top five in shooting percentage, individual expected goals and hits. What might be the most impressive part of his season, though, is that he is having all this success despite averaging just 12:21 of even-strength ice time per game.

Tanev has been fantastic at even strength but also shorthanded. He has played just over 44 minutes shorthanded, and the team has allowed just six goals when he is on the ice. He has also created a high-danger scoring chance and blocked four shots. If he can stay healthy and keep up his strong play all season, he could be in the conversation for team MVP at the end of 2022-23.

Minus One: Kraken’s Faceoff Problems

The Kraken’s Achilles heel so far this season has been winning faceoffs. They are ranked last in the league and have a 43.2 percent win percentage. This is an area they desperately need to improve, whether it be by trade or through dedicated practice time.

This is not a new problem, as the Kraken finished last season below 50 percent, but this season, they have hit a new low. The only center on the team that has a win percentage above 47 percent is Jared McCann, and he has only taken 35 faceoffs total. Overall, Seattle is below 46 percent in every zone and situation, with their worst win percentage coming shorthanded at just 37.6 percent. Something needs to change and quick, otherwise, it could result in not just goals allowed but also losses.

Plus One: Jagger Firkus Dominates

A 2022 second-round draft pick, Jagger Firkus has dominated since being returned to the Western Hockey League (WHL). He has a point in 14 of the 16 games he has played in so far this season and is riding an 11-game point streak. The Moose Jaw Warriors are one of the hottest teams in the WHL, and he has been a major factor in their recent success.

Related: Kraken May Have the Steal of the 2022 Draft in Jagger Firkus

Minus One: Kraken Penalty Kill

After 16 games, the Kraken’s penalty kill is a dismal 75.9 percent. This is the most concerning trend for Seattle, as a bad penalty kill can make or break a team’s season. Last season, no team under 76 percent made the playoffs, so the Kraken need to find a way to be more efficient when down a player if they have postseason aspirations.

There are a few reasons why the Kraken have struggled on the penalty kill, but the main one is goaltending. Their team SV% of 82.19 ranks in the bottom 10 of the league, and both Jones and Grubauer are in the negative when it comes to goals saved above expected. The good news is the team has scored eight shorthanded goals, but they will have a hard time fighting for a playoff spot if their goaltending doesn’t improve on the penalty kill.

The Kraken have a busy end to the month of November as five of their six games come against division rivals. If they can pull off at least eight points over their next six games, including a regulation win over Vegas on the road, it will go a long way in helping to secure their first postseason berth in franchise history. The schedule is only going to get more difficult from here on, so stockpiling points in the first 20 games of their season is a must.