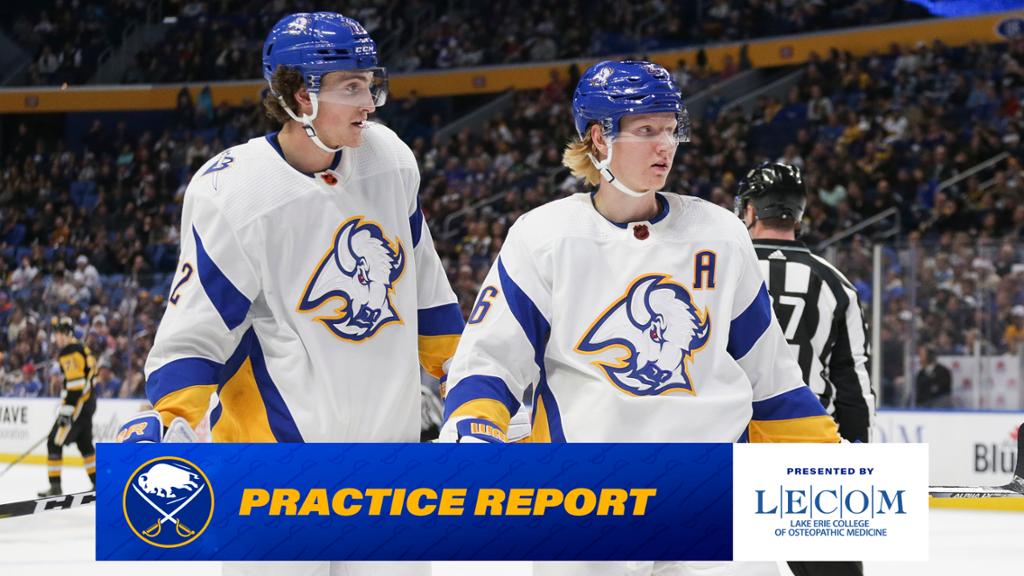 Tyson Jost was briefly teammates with Tage Thompson during the 2017-18 season, when the San Antonio Rampage served as a joint AHL affiliate for the Colorado Avalanche and St. Louis Blues.

Jost and Thompson had both been selected during the first round of the NHL Draft one year prior – Jost to the Avalanche, Thompson to the Blues. Jost only played five games with the Rampage, but it was enough for him to notice the potential his 6-foot-6 teammate, then only 20 years old.

“You could tell he had a ton of skill and a ton of potential,” Jost recalled Monday. “It’s great to see that he’s living up to that and flourishing. Hard worker too, so he’s deserved everything, all the accomplishments that he’s gotten so far. I’m happy for him.”

Jost has seen Thompson’s development up close in the month since he joined the Sabres off waivers from the Minnesota Wild. Thompson was named NHL Second Star of the Week on Monday after tallying seven points in three games, including a five-goal, six-point performance in Columbus on Wednesday.

Thompson ranks third in the NHL with 21 goals and fourth with 41 points.

“There’s no one that plays the game the way that he does,” Jost said. “Just his talent, how he’s built, the reach he has. I think that’s one thing that’s amazing, when he makes a move it’s a 10-foot span just because of how big his wingspan is and his stick.”

While Thompson’s combination of size, skill, and physicality make him unique among the NHL’s forwards, Jost compared his talent to another former teammate with the Avalanche.

“It’s kind of similar to when I was in Colorado and (Nathan) MacKinnon was starting to break out, too,” Jost said. “You see some similarities in that sense. Maybe not in the way they play, but definitely in how they’re projecting in their career.”

Here are more notes from practice at KeyBank Center on Monday.

1. Thompson is the third Sabres player to receive Star of the Week honors this season. Rasmus Dahlin was First Star for the week ending on October 24; Dylan Cozens was named Second Star last week.

“I think it’s definitely nice,” Thompson said. “It speaks to the work that guys have been putting in. When you put work in for a while it’s nice to get that recognition, I guess you could say. I think that’s what we’re working as a team as well.

“We’ve have had a few individuals achieve that now, now it’s time for us to do that as a team, start to win some games and get some recognition from a whole team standpoint.”

“I feel it’s a great barometer of what’s ahead for the group and the team,” he said. “Those players were not able to achieve what they did without other guys being competent around them. They’re separating themselves from their peers around the league with help of their teammates here and I think it’s a good indicator that our collective game is improving when you have three different players in that situation.

“You can’t do that without a team getting better and better and better. That’s what we feel we see. So aside from just the personal accomplishment for each one of those guys, which is really nice, I think it’s a good gauge of the direction we’re going and we’ve talked about that.”

3. Vinnie Hinostroza joined the Sabres for practice after missing the last five games with an injury. He is still considered day to day.

4. Jeff Skinner addressed his three-game suspension, which followed a cross-check on Pittsburgh Penguins forward Jake Guentzel on Friday. Skinner received a match penalty along with a two-minute minor for slashing on the play and was suspended by the NHL Department of Player Safety on Saturday.

“It’s one of those things where it happened, and they made their decision,” he said. “And for me, it’s just move on. Try to get better in practice and get ready for the next game I can play.”

He continued: “I mean, there’s a lot of stuff going on. There’s obviously a lot of bodies in there. Obviously, I wasn’t meaning to catch him as high as I did. Stuff happens in games, and you try and protect yourself as well as you can in scrums and situations like that. So, it’s just the way it goes.”

5. Here’s how the Sabres lined up during practice: