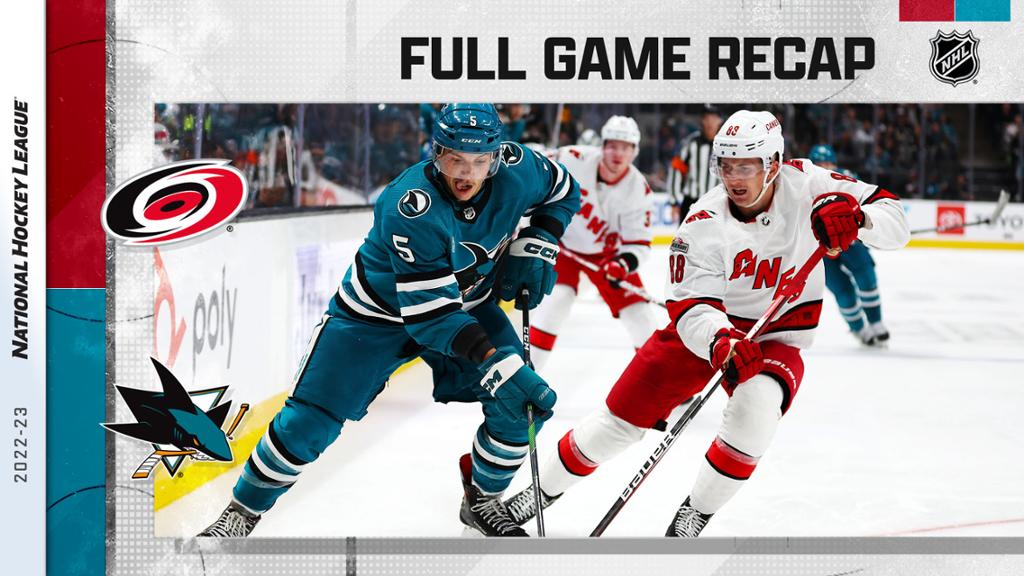 Aho was credited with the goal when Brett Pesce‘s shot from the top of the right circle redirected in off his left skate.

“Just a great play by Pesce taking a little second to look,” Hurricanes coach Rod Brind’Amour said. “I thought we had a lot of play in the O-zone. A lot of close calls.”

Martin Necas also scored for the Hurricanes (2-0-0), who were beginning a five-game road trip. Antti Raanta made 18 saves.

“I think we played pretty well today for the whole 60 minutes,” Raanta said. “Special teams, good PK, and then obviously we got the late goal and then defended really well at the end there. So you take the two points and move forward.”

Evgeny Svechnikov scored for the Sharks (0-3-0), who host the Chicago Blackhawks here on Saturday. James Reimer made 33 saves.

“For the most part, I thought we weathered the storm,” Reimer said. “We worked hard, we battled hard. These guys are giving it their all and they’re grinding. They’re digging in. It’s impressive to see our compete level. So when you play hard and honest, good things will happen. Obviously, we don’t want to be down 0-3 to start, and moral victories aren’t something you can hang your hat on, but at least when you put your head on the pillow tonight, I think a lot of these guys have at least peace because they worked their bags off.”

Svechnikov put the Sharks ahead 1-0 at 17:48 of the first period. He received a pass from Jaycob Megna in the left face-off circle and beat Raanta short side after his shot deflected off Calvin de Haan‘s stick.

“We did some good things in the first period, but I really thought that we didn’t really do much in the second or third,” Sharks coach David Quinn said. “I thought they won a lot of battles and won the foot races to loose pucks, and we seemed to be chasing the game for the better part of the second and the third period.”

Necas tied it 1-1 at 19:37 of the second period. Andrei Svechnikov forced a turnover by Kevin Labanc in the neutral zone before feeding Necas, who faked a backhand and scored five-hole on Reimer.

“First period we had some tough shifts, but in the second I feel like we were the better team,” Necas said. “It was good that we had a goal at the end of the second.”

“[The second period] really highlighted our turnovers,” Quinn said. “When you turn it over as much as we did in the second period, you can’t get off of the ice because of the long change. If you go back and look at it, the turnovers really gave us a lot of trouble. But give [the Hurricanes] credit.”

NOTE: Brent Burns had two shots, one hit and was plus-1 in 23:19 of ice time in his return to San Jose. He was acquired by the Hurricanes on July 13 after playing the previous 11 seasons with the Sharks.