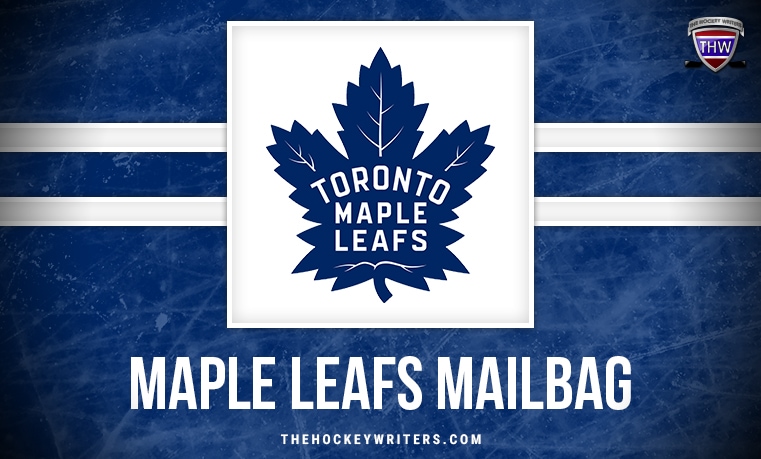 Well, we haven’t had one of these in quite some time and while we only two weeks into the new season, the Toronto Maple Leafs have their fanbase swirling in a mixture of emotion already. Losses to the Arizona Coyotes and Montreal Canadiens, injuries piling up and all of a sudden the storylines to this season have accumulated into a list that many don’t know what to do with.

So, with that, what better time than now to reach out to Leafs Nation and find out what’s on their mind. What burning questions have them spiralling this early in the season and what are they saying about their beloved Maple Leafs?

Without further ado, here are some of the questions I received this week.

Can They Win a Round? (Chris Shea)

Well, it’s no surprise this was an extremely common question. Simple answer is yes, they CAN win a round. The real question is WILL they win a round come playoff time?

Look, there are so many factors that will go into this that makes this a multi-layered question. Will there be more injuries? Who will they play in the first round? Could we see a coaching change midseason? What will happen at the trade deadline?

Realistically, this team has been good enough to win a round for a number of years. Bad breaks, poor efforts in Game 7s and constantly chasing games seem to be the downfall for this organization in recent years. That and the consistently strong Boston Bruins they continue to run into or the back-to-back champion Tampa Bay Lightning seems to hold this extremely talented team back.

So is this the year? Maybe. They filled Jason Spezza and Ilya Mikheyev’s spots in the lineup with Zach Aston-Reese, Nicolas Aubé-Kubel and what looks like it could be Nick Robertson for the foreseeable future. On top of that, their back end looked pretty solid before Jake Muzzin got hurt and that was with Timothy Liljegren sidelined.

The pieces are there. The goaltending may still be a question mark for some, but Ilya Samsonov has started the year 4-0-0 with a 1.73 goals against average (GAA) and .938 save percentage (SV%) with Matt Murray out. So question it all you want, the quality has been there so far.

So, after a long-winded answer, could the Maple Leafs win a round in the playoffs? Yes, absolutely they could win a round and barring catastrophe, I’ll go as far as saying they will win a round this time around. Even then though, that’s just the start.

Well, the questions might be the same, but those two individual assets on the Maple Leafs are much, much different than 2021-22. The blue line is bolstered with a full year of Mark Giordano, and while there are still questions around Rasmus Sandin and Liljegren, this will be their opportunity to show what they can do.

Obviously, the injury to Muzzin isn’t ideal, but if it’s a long term thing, the Maple Leafs have an opportunity to go out and get another piece to solidify that back end. Still, I think the biggest question mark on the blue line is Justin Holl. Which Holl are we going to get? That’s not a yearly question, that’s a nightly question and that’s what makes it so difficult to judge, especially when the guy is seeing roughly 20 minutes per night. But they still are reliable and I say that because look at the goaltending side of it.

No one — and I realistically mean a majority of the fanbase — didn’t have faith in the Murray, Samsonov tandem coming into the season. Sure, Murray is already hurt and out for at least another three weeks, but Samsonov has come in as advertised. He’s on a prove-it deal and he’s coming through so far for the Maple Leafs — see the stat line above.

To this point, the back end has carried their weight and the goaltending has been pretty impressive thus far. The questions, if you don’t mind overthinking it this early in the season, might be up front around the lack of scoring to this point.

Chemisty… Will It Be There? (Adam Czarnick)

That’s a great question, Adam. While there weren’t significant changes in the offseason, there were enough to wonder if it will all come together. I’d say there’s nothing to really worry about. The top line is still together and getting opportunities. The second line seems to have found a solid option on the wing with Robertson — at least early on.

The bottom six might be the bigger question mark when it comes to fitting in with each other. Kämpf lost his good friend in Ondrej Kaše, but Calle Järnkrok and Alexander Kerfoot should be solid fill ins.

From what’s left over, you can throw together a fourth line that should bring energy on any given night — whether it be Aston-Reese, Aube-Kubel, Simmonds or someone else, the Maple Leafs have options and at that point you’re going out there and trying to retrieve the puck and create chances while holding the zone.

The chemistry won’t be an issue. The biggest thing is getting everyone clicking on all cylinders at the same time and consistently. That’s where the Maple Leafs have had issues late in seasons over the past few years.

As always, thank you to those who posed questions this week and for those who are interested in digging deeper into something hockey or Maple Leafs related, be sure reach out on Twitter, Instagram or Facebook with your questions.

Andrew is in his 8th year reporting for The Hockey Writers covering the Toronto Maple Leafs. He began his broadcasting with CBC’s Hockey Night in Canada team as well as being part of their coverage of the 2014 Winter Olympic Games in Sochi. He’s the former play-by-play voice of the London Jr. Knights for Rogers TV and currently hosts the Sticks in the 6ix podcast. You can follow him on Twitter at @AndrewGForbes.