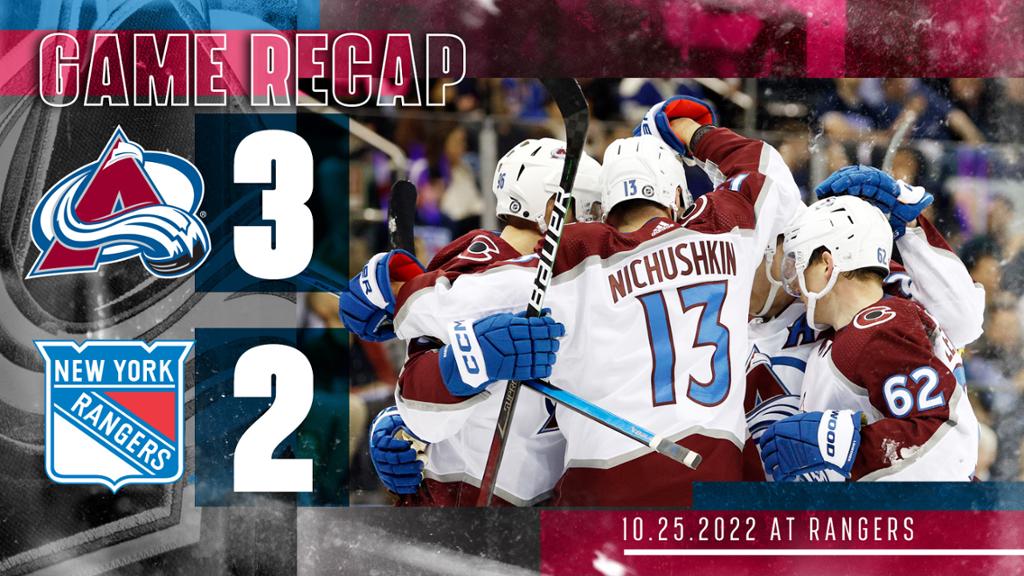 The Colorado Avalanche defeated the New York Rangers 3-2 in a shootout on Tuesday night at Madison Square Garden. The matchup kicked off a three-game road trip in the Tri-State. The Avalanche are now 4-2-1 on the season.

For the Avalanche, Valeri Nichushkin scored on the power play, while Logan O’Connor scored shorthanded. Alexandar Georgiev made 44 saves – 41 saves on 43 shots in regulation and three saves in overtime – against his former club.

The matchup between the reigning Stanley Cup Champions and the Rangers, who were eliminated in the 2022 Eastern Conference Final, did not disappoint. The high-flying meeting on Tuesday night featured a combined total of 90 shots between regulation and overtime and required a shootout.

The Avalanche took a 1-0 lead heading into the first intermission as they continued their success on the power play with a conversion from Nichuhskin.

Rangers forward Kaapo Kakko was called for holding at 10:25. On Colorado’s power play, Nathan MacKinnon cycled the puck back out to the blueline where Cale Makar ripped a point shot on net. At the net front, Nichushkin tipped the puck past Shesterkin, his fellow countryman, at 11:40.

Down by a goal, the Rangers poured the pressure on in the second period as they came out firing and outshot the Avalanche 15-7 in the frame – including a 7-3 shot advantage through eight minutes.

The Avalanche produced a Grade A chance midway through the period as Mikko Rantanen was sprung for a breakaway, but as the Finnish winger toe dragged across the crease and lifted the puck, Shesterkin made a highlight-reel save swatting it down.

The save poised the Rangers to capitalize on an quick-strike transition play at late in the period at 18:06. After Shesterkin made yet another save on an Avalanche rush, the Rangers countered with Colorado’s blueline backchecking and executed a tic-tac-toe play. Sammy Blais sent a pass to the doorstep to Jacob Trouba, who immediately slotted the puck across to the backdoor where Goodrow buried it to make it a 1-1 game.

With the score locked at one goal apiece and the Avalanche on the penalty kill, they ended up doubling their lead early in the third period with a shorthanded strike from O’Connor. As Colorado cleared the puck outside of the defensive zone, Shesterkin exited his crease and attempted to play the puck. Andrew Cogliano turned on the jets and forechecked the puck free from the reigning Vezina Trophy winning netminder and dropped a pass to O’Connor as he entered the slot. O’Connor buried his first goal of the season as he beat Shesterkin glove side.

The Rangers tied the score up 2-2 at 14:03 as they capitalized on their second transition play. Fox stripped MacKinnon of the puck in the Rangers’ defensive zone and Fox jetted up ice leading a quick counter attack. Fox quickly passed the puck to Goodrow who sent the puck down to the lower inside of the left faceoff circle to Jimmy Vesey, who threaded the puck to the backdoor for Fox to tap it in for the equalizer which sent the game into overtime.

In the shootout, MacKinnon and Makar were denied, while Rantanen wired a high wrister and Rodrigues executed a nifty deke to beat Shesterkin for the shootout victory and to collect the extra point.

Georgiev denied his former teammates in Kakko, Mika Zibanejad and Alexis Lafreniere – but was beat by Artemi Panarin – to secure the victory.

In a postgame interview with ESPN, Georgiev described the win against his former team as, “epic,” and his stellar performance supported it.

Georgiev made his fifth start of the season and improved his record to 4-0-1.

As he faced his former club, Georgiev appeared dialed in from the start of puck drop and denied all 11 shots he saw against the Rangers in the first period as he made acrobatic stops including a sharp one on Mika Zibanejad with five minutes left in the frame.

Georgiev was solid in the second period and continued to come up with timely and clutch saves and a 14-save effort in the frame. The Avalanche netminder came up with a pivotal stop as the Rangers were awarded a power play at 13:10 after J.T. Compher took a hooking penalty. With a shot taken off a Rangers faceoff win, the puck trickled through Georgiev’s pads. Despite the Rangers initial celebration, the puck never crossed the goal line as he sat back on

the puck and held it safely in the blue paint.

Georgiev continued to be stellar in net during in the third period where he made 16 saves.

The Avalanche continue their Tri-State stretch as they take on the New Jersey Devils on Friday night at Prudential Center. Puck drop between the Avalanche and Devils begins at 5 p.m. MT.