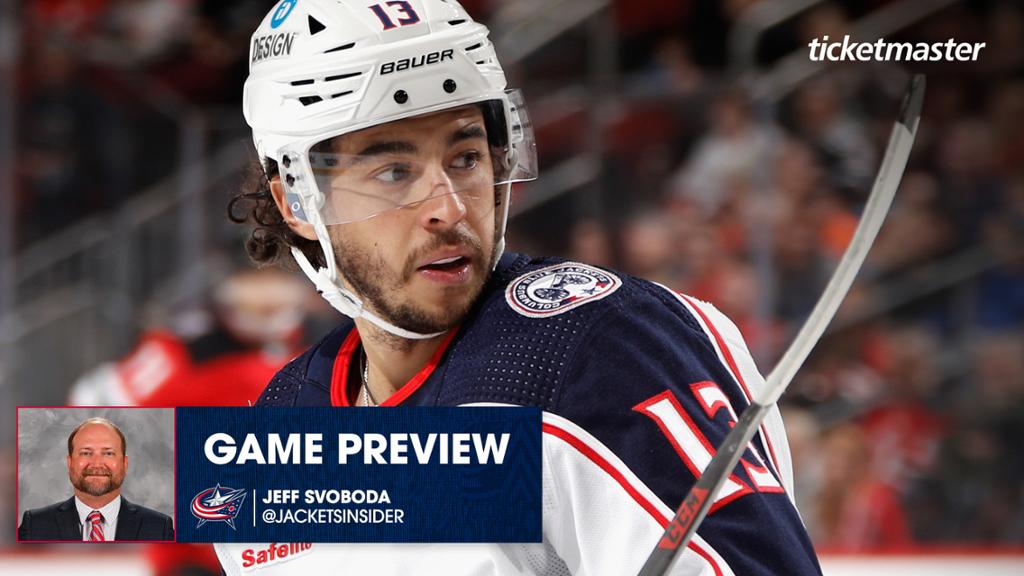 The Blue Jackets will get another dose of dealing with adversity after losing three defensemen — including top blueliner Zach Werenski — in Thursday night’s victory over Philadelphia when they visit Long Island to take on New York on Saturday night. Columbus was already without a number of key pieces, but the hope is some energy will have been built from the 5-2 victory over the Flyers.

Brad Larsen is fond of saying nobody in the NHL will feel sorry for you, whether the troubles you’re hitting are on the ice or the injury front.

The Blue Jackets had plenty of the former to start the season, and now they’re dealing with the latter. Columbus lost forwards Jakub Voracek and Sean Kuraly during its trip to Finland last weekend for the NHL Global Series, then came home and saw defensemen Werenski, Nick Blankenburg and Erik Gudbranson go down to injury in the win over the Flyers.

None of it is ideal, but the schedule isn’t going to stop. The show must go on, and it will tonight against the Islanders.

“I think in some aspects it’s definitely tough,” defenseman Jake Bean said. “It’s hard. You never want to see your guys go out, especially guys who play such important roles on the team. But it’s an opportunity, and things weren’t going the way we wanted it to, so we need to step up and change the direction regardless of what we have.”

With the injuries, Columbus is down to just three of its top seven defensemen from the start of the season. Bean, Vladislav Gavrikov and Andrew Peeke will be counted on to play big minutes, while it appears veteran Gavin Bayreuther, youngster Jake Christiansen and Swedish import Marcus Bjork will go into the lineup.

Those three have played a combined 80 NHL games, 72 of them by Bayreuther, while Bjork, a 24-year-old veteran of Sweden’s top level, is expected to make his NHL debut. A lot of players will be put into new situations, but all they can do is try to seize the opportunity.

“There’s guys here that are excited to play,” Larsen said. “I’ll tell you right now, they see what is in front of them. Someone has to take these minutes. It can pull a group together. It’s gonna be a challenge, there’s no question, but you gotta meet it head on.”

The narrative: A disappointing season in 2021-22 led to the end of the Barry Trotz era, with one of his assistants taking over in Lambert. The former Cleveland Lumberjacks forward has picked up where Trotz left off, leading a veteran team to a good start on the strength of steady defense and clutch scoring.

2022-23 leaders: Brock Nelson and Mat Barzal are tied for the team lead with 15 points but have taken different ways to get there, with Nelson posting six goals and nine assists and Barzal notching all 15 points on assists. Anders Lee has eight goals among his 14 points to lead the team in tallies, while Noah Dobson is the top-scoring defenseman with a 4-6-10 line. In net, Ilya Sorokin has started 10 games and is 6-4-0 with a 2.09 GAA and .936 save percentage, and he’s second in the NHL in goals saved above average per 60 minutes per MoneyPuck.com.

What’s new: General manager Lou Lamoriello chose to largely stand pat personnel-wise after last season, a decision many questioned after the team saw its three-season playoff streak snapped. But the Islanders finished strong, and so far that faith has been rewarded as the Islanders have captured nine of their first 15 games. The top 12 scorers from a season ago all have returned, and perhaps that cohesion is why the Islanders have won seven of their last nine.

Trending: The Blue Jackets had the Isles’ number it seemed from 2016-18, going a combined 6-2-0, but New York has countered the past four seasons. In that time span, Columbus is just 3-7-1 in the series.

3 Keys to the Game

Stick with it: The Islanders’ strength is team defense, and things don’t come easy, especially in their home barn. To emerge with two points, the Jackets have to stay engaged every step of the way.

Bottle the energy: Columbus played with a lot more jump in Thursday night’s victory, winning puck battles and upping the compete level. That has to continue.

New faces, new places: It hurts losing such players as Zach Werenski and Jakub Voracek as the Jackets have of late, but that just offers the chance for their replacements to bring something new to the equation.

Boone Jenner is coming off the first game in his career with a plus-4 rating, and the captain has three goals in the past two games. … Kent Johnson is tied for 10th among NHL rookies in points. … Eleven Blue Jackets have multiple goals. … Mathieu Olivier is tied for third in the NHL with three fighting majors including two in the last two games. … With nine goals by defensemen, the Jackets are fifth in the NHL.

This Day in CBJ History

Nov. 12, 2016: Columbus scores early and often in an 8-4 victory over the St. Louis Blues in Nationwide Arena. Sam Gagner scores twice while Boone Jenner notches his 100th career point in the win.

Nov. 12, 2019: Eric Robinson scores his first NHL goal at Montreal, but the Canadiens rally for a 3-2 victory in a shootout at Centre Bell.

Roster Report: The Blue Jackets will have to make three changes on defense due to the injuries to Werenski, Gudbranson and Blankenburg, with Christiansen, Bayreuther and Bjork recalled from Cleveland to join the lineup. Head coach Brad Larsen said Korpisalo will start for the third straight game, while any other changes will be confirmed pregame.