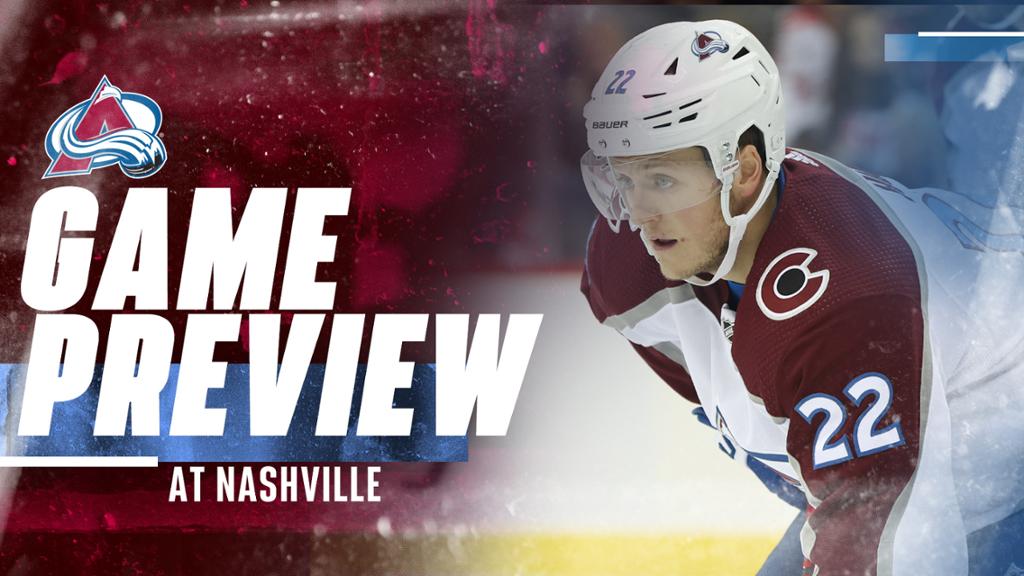 The Colorado Avalanche enter Friday afternoon’s contest with a record of 11-6-1, while the Nashville Predators are 9-9-2. Puck drop is at noon MT inside of Bridgestone Arena.

Colorado dropped their last game against the Vancouver Canucks 4-3. Right winger Mikko Rantanen found the back of the net twice, both in the first period, including once on the power play. Defenseman Cale Makar also scored on the power play. Goaltender Pavel Francouz drew the start and stopped 21 of 25 shots he faced.

Nashville enters Friday’s contest coming off a 3-0 shutout loss at Detroit on Wednesday night. Kevin Lankinen made 26 saves on 28 shots in the loss.

Colorado has historically struggled against Nashville. In 88 meetings, the Avs are just 36-38-14. The divisional foes have faced off twice in the postseason, most recently with the Avalanche sweeping the Predators in the first round of the 2022 playoffs.

Center Matt Duchene played for the Avalanche from 2009 to the beginning of the 2017 season, appearing in 586 games. Duchene would total 178 goals and 250 assists during that span. Duchene still holds multiple franchise records. His 178 goals and 29 game-winning goals are both ninth all time in franchise history.

Nashville assistant coach Dan Hinote was originally selected in the seventh round of the 1996 NHL Draft (167th overall) by the Avs. Hinote would play for the Avalanche from 1999-2007, compiling 27 goals and 38 assists in 353 outings.

Avalanche captain Gabriel Landeskog is sidelined for at least 12 weeks after undergoing surgery. Veteran center Darren Helm is still sidelined after undergoing offseason surgery but has been skating. There is no timetable for his return. Forward Valeri Nichushkin is out at least a month after undergoing surgery. Defensemen Bowen Byram and Samuel Girard are out with undisclosed injuries. Center Shane Bowers made his NHL debut on November 10 but suffered an upper body injury in less than two minutes of ice time. Kurtis MacDermid suffered a lower body injury November 12 and is out four to six weeks. Forward Evan Rodrigues suffered a lower-body injury in the first period against Vancouver and did not return, there is no update on his status or timeline.

Defenseman Mark Borowiecki was placed on IR on Halloween after being stretchered off in Nashville’s game against the Philadelphia Flyers on October 22. There is no timetable for his return.

With Rantanen’s two goals on Wednesday, the forward moved into a tie with Matt Duchene for ninth place on the franchise’s all-time goals list and tied with Duchene for sixth since the team moved to Denver.

With Cale Makar’s third-period goal on Wednesday he moved into a tie with Vegas Golden Knights defenseman Alex Pietrangelo for third place for points among defensemen (21 – 6G/15A).

QUOTE(S) THAT LEFT A MARK

“It shuffles the lines a little bit, which can throw off some chemistry. For the most part, we’re professionals. Guys can fill spots and that’s part of stepping into the lineup.” – Defenseman Josh Manson on the Avs’ injuries