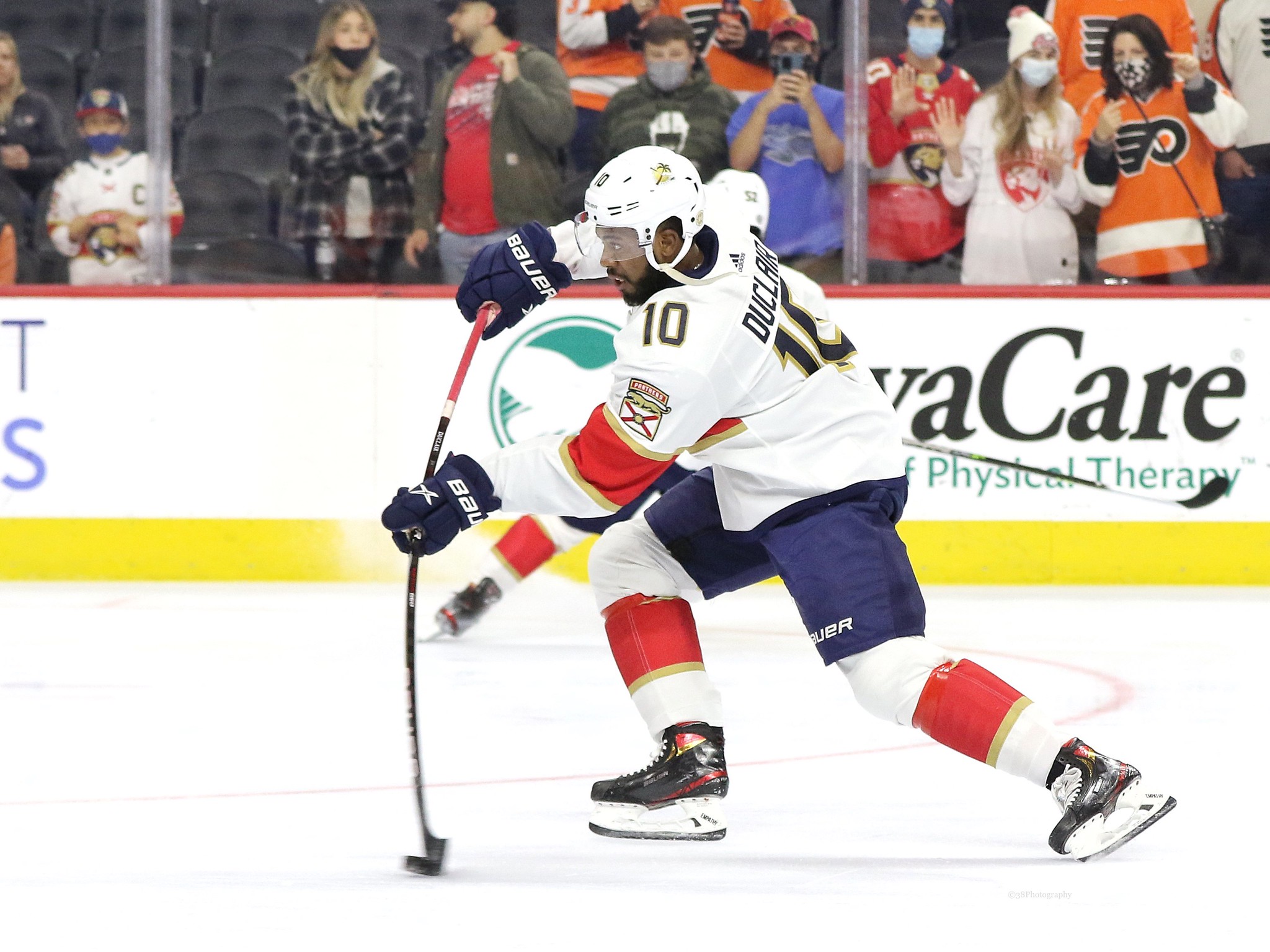 At some point, the Florida Panthers are going to have to trade one of their forwards to clear cap space for when Anthony Duclair and Patric Hornqvist return from injury. That means someone of value is going to be moved and the Calgary Flames can take full advantage of that. Since the offseason, general manager Brad Treliving has wanted to upgrade the winger position of the Flames, and that appears to be their main goal before the trade deadline.

Insider Frank Seravalli of The Daily Faceoff brought up the question if Calgary could be a landing spot for Duclair. But I add to that by suggesting Sam Reinhart as a viable option on the wing for the Flames as well. They would not only be well-equipped to win the playoff race this season with an extra top-six forward on the wing, but the team would also have the services of either of them for next season.

Who is the Better Choice, Duclair or Reinhart?

At first look, most signs point to Duclair being the better option for the Flames. The Flames “lack punch that can push the pace and back defenders off,” in Seravalli’s words. Duclair has that, but will also need some time to get back into the swing of things once he returns from injury. He has been out this entire season while recovering from surgery to repair his Achilles tendon.

Paul Maurice said that Duclair started skating at practice a few weeks ago, “but because of the type of injury and the severity of it, there isn’t any coming back early. He has to get trained again and get back into hockey shape. But he is on the mend.” Maurice also said that it would be nice if the team had a player who could score 30 goals and skate like the wind when the Panthers have been dealing with injuries. Those abilities Duclair possesses are what makes him valuable and why the Flames could use him. He won’t come cheap though as many teams likely have their eye on him, and he has a low cap hit of $3 million average annual value (AAV).

Reinhart is a much different player as he’s been consistently able to put up points in the NHL since the moment he entered the league. The Panthers’ team from last season was broken up and he has had a much tougher time putting up points. The winger has just 12 goals and 26 points in 40 games. That’s not bad by any means, it’s just much lower than the 33 goals and 82 points he posted last season. Keep in mind the Panthers were a run-and-gun team that led the league in goals.

Reinhart is also an option at centre, and like Duclair, will be under team control through next season. The difference is he has a cap hit of $6.5 million and doesn’t have the speed Duclair has. But seeing as he takes up more cap space and isn’t having the greatest season, the Panthers may be more inclined to trade him and even retain a bit of salary. Reinhart is a lock for the power play and always contributes there, but has started to kill penalties more this season and is already at a career-high in shorthanded time on ice.

Related: Flames’ Patience in Dube Paying Off in Big Way

The Flames’ Need for Scoring Help

The Flames haven’t been great, but they also haven’t been bad this season. They are inside the playoff picture right now with a few teams hot on their tail. It was a culture change as the team’s two highest-scoring players left in the offseason and two new high-level forwards came in. But it was going to be tough for Jonathan Huberdeau and Nazem Kadri to repeat their 2021-22 seasons in a new environment.

Huberdeau has dropped from a 1.43 points-per-game last season on the Panthers to 0.7 this season which is a much larger drop-off than even the harshest critics could have imagined. He’s also playing far less per game and isn’t the type of player that exactly fits well in Darryl Sutter’s system.

Kadri was expected to have more of a drop-off considering the role he came from with the Colorado Avalanche and how his season was an anomaly compared to his career. He has been much more productive than Huberdeau and has been given more ice time because of it. It was going to be tough for Kadri to play at a point-per-game pace again this season as his highest offensive output before last season was 32 goals and 61 points. That is a more realistic mark to expect from him and he is right on track to reach that this season with 15 goals and 30 points in 40 games.

The Flames are 22nd in goals in the NHL and also ranked 22nd in goals-per-game. Not only have the defence and goaltending not been where it was last season, but the offensive production has also hindered sustained success. They finished sixth in goals last season with 3.55 goals per game, higher than this season where they have 3.05. In the long run that makes a big difference.

After losing two 40-goal scorers from last season and getting back two 30-goal scorers who had career years, bringing in another 30-goal scorer in Duclair or Reinhart would help pick up some of the slack. Either would act as a good complement to Huberdeau and Kadri as Duclair and Reinhart have more of a shoot-first mentality. The Flames are in a good position to take advantage of the bad cap situation in Florida and become a better team for the remainder of this season and next.